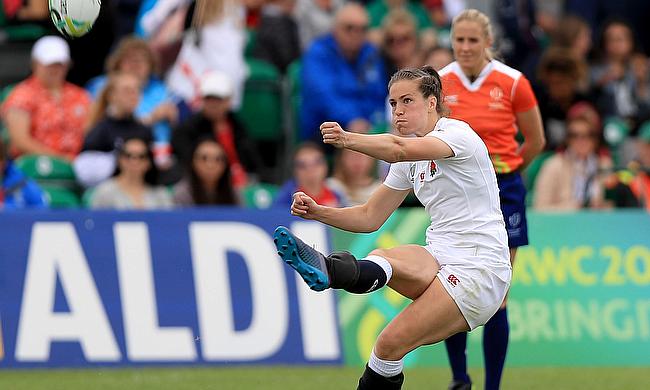 Abby Dow scored a double while Emily Scarratt contributed with 24 points as England trounced Italy 67-3 in the second round of Women's Six Nations at Stadio Sergio Lanfranchi.

This is second win for England from as many games as they have secured the place in the final that will be played on 24th April.

The Azzure kept England at bay in the opening quarter having most of the possession before the deadlock eventually ended in the 22nd minute when Scarratt capitalised on a loose ball and went over for the opening try. The England vice-captain also followed it with a conversion making it 0-7.

England soon doubled their tally around the half-hour mark with Meg Jones racing past Italy defence to offload to Vicky Fleetwood as she touched down and once again Scarratt improved making it 0-14.

The visitors suffered a setback with Scarratt sent to sin-bin in the 33rd minute for a high tackle and Michela Sillari kicked a penalty goal to get Italy off the mark but unfortunately for them that remained their only points in the game. Helena Rowland restored 14-point lead for England heading into the break with a penalty goal at the end of the opening half.

Scarratt returning from sin-bin straightaway made an impact with her second three-pointer and by the 53rd minute Italy were down to 14 players temporarily with Sara Barattin sin-binned for trying to play the ball on the ground. England made maximum use of the numerical advantage as they ran through four tries in the next 10 minutes with Abigail Dow (54' and 61'), Harriet Millar-Mills (57'), and Helena Rowland (59') all going over as the scoreline became 3-48.

Italy suffered another setback with this time replacement Erika Skofka, who came off the bench in the 66th minute was sin-binned two minutes later and further tries from Bryony Cleall (69'), Claudia MacDonald (78') and Lark Davies (80') ensured the red rose team completed a dominating 67-3 win.