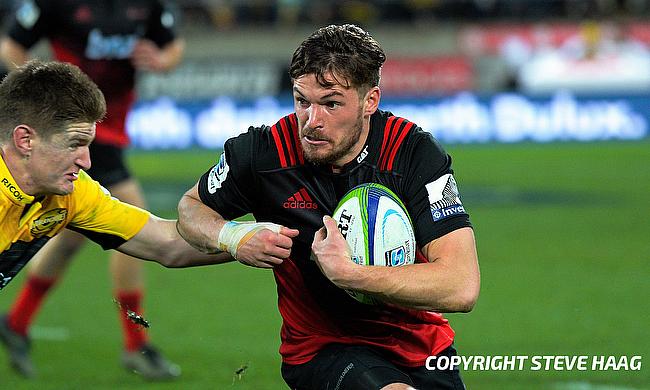 David Havili kicked the decisive drop goal in the extra time as Crusaders edged out Hurricanes 30-27 in the seventh round of Super Rugby Aotearoa at Sky Stadium.

This is Crusaders' fourth win from five games as they consolidated their position at the top while Hurricanes are languishing at the bottom of the table after losing their fifth match in six games.

Hurricanes had a chance to open their account early but a 50m kick from Jordie Barrett drifted wide. The fullback made amends in the 10th minute with a three-pointer after Codie Taylor was penalised.

The response from the visitors came in the 11th minute when Bridge scored the first of his two tries which was awarded to Crusaders after a TMO consolation and Mo'unga improved it making it 3-7.

Cruasaders doubled their tally in the 24th minute after Bridge went over for the second time after grabbing a kick from Taylor. With Mo'unga kicking the conversion right, the visitors extended their lead to 11 points before Ngani Laumape and Julian Savea kept Hurricanes in the game with back to back tries in a span of four minutes as the scores were levelled 17-17.

The end of the first half also saw Hurricanes reduced to 14-men temporarily with Laumape sin-binned for taking Barrett out of the breakdown in the build-up.

Despite down by numerical advantage, Hurricanes seized early initiative in the second half Savea broke down the blindside before offloading to Barrett, who sent Goosen over. Barrett also followed with the conversion to make it 24-17.

The end of the third quarter saw Mo'unga and Barrett trade penalties as Hurricanes maintained their seven point lead before Sevu Reece's try in the 67th minute ensuring the gap came down to two points which was closed by a conversion from Mo'unga. With neither team managing to get the crucial breakthrough, the game went into extra time with the golden point being the decider.

However, it was the Crusaders, who seized the decisive moment with David Havili running through the gap and kicked the drop goal two minutes into the extra time to seal a thrilling win for the defending champions.