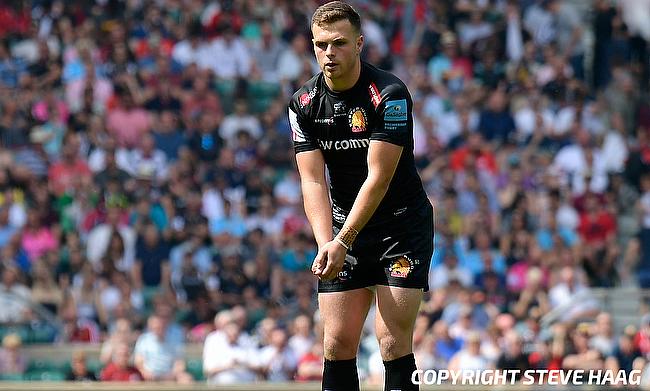 Exeter Chiefs managed to overcome a red card to Sam Skinner as they made a stunning second half comeback to beat Sale Sharks 20-19 in the final round of the Gallagher Premiership at Sandy Park.

The one-point victory also meant Exeter finished second in the regular season as they sealed a home play-off berth and they will be facing Sale Sharks again in the semi-final.

Just three minutes into the opening half, Sale Sharks made a blistering start when Byron McGuigan scored his ninth try from 10 games and Aj MacGinty kicked the conversion to take them to a 0-7 lead. Exeter's response came in the 7th minute when Joe Simmonds kicked a long range penalty kick.

Sale suffered injury setbacks with Cameron Neild and Akker van der Merwe forced off the field but they doubled their tally in the 22nd minute when MacGinty spotted the gap to cross under the posts and also followed with the extras taking the scoreline to 3-14.

Around the half-hour mark, Exeter had an injury blow with Jannes Kirsten leaving the field for a Head Injury Assessment and in the 34th minute they lost Dave Ewers to yellow card for a high hit on Simon Hammersley as they gap between the sides remained at 11 points heading into the break.

Sale extended their lead further early in the second half when a grubber kick from MacGinty found Arron Reed, who dotted down but the conversion went wide making it 3-19. Sale's chances took a further boost as Rob Baxter's men were reduced to 14-men in the 54th minute after Skinner was sent-off for a shoulder to the head of Fat de Klerk.

Despite down on the numerical advantage, Exeter went for the attack as Luke Cowan-Dickie dived from close range in the 60th minute and five minutes later Stu Townsend followed the suit after Sale lost Ben Curry to sin-bin. Joe Simmonds kicked both the conversions as the gap between the sides came to 17-19.

Simmonds with a 71st minute penalty kick put Exeter into front for the first time in the game which they held on for the remaining nine points while Sale's problems compounded as MacGinty was stretchered off the field with a knee injury in the closing stage.