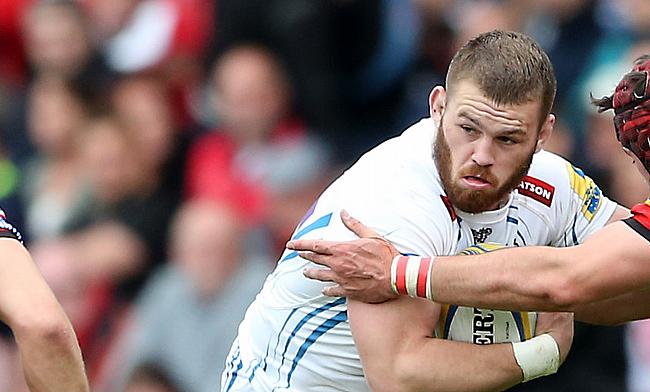 Exeter Chiefs managed to hold off Saracens as they went on to register a 18-15 victory in the 10th round of the Gallagher Premiership at Sandy Park on Saturday.

This is sixth win for Exeter in 10 matches as they moved to fourth place in the table while Saracens despite the defeat are at second position.

While Saracens were without Owen Farrell and Jamie George due to injuries, Elliot Daly returned to the line up after recovering from a stress fracture. With Joe Simmonds penalised for an obstruction, Alex Lozowski started the proceedings with a fourth minute penalty goal to take Saracens off to a 0-3 lead.

By the 10th minute, Exeter had a try disallowed due to an offside following which Sam Simmonds went over. The woes continued for the home side as Joe Simmonds missed a penalty goal in the 21st minute but made amends with a three-pointer in the 24th minute as the scores were levelled 3-3.

As Sam Simmonds was adjudged to have entered from the side at a ruck in front of his own posts, Saracens were handed another penalty chance, which Lozowski kicked to perfection to put Mark McCall's men three points ahead.

With the break approaching, Exeter got the opening try of the game, when a cross-field kick from Joe Simmonds allowed Tom O’Flaherty to dot down in the 38th minute. Joe missed out on the conversion as the home side had a 8-6 lead at the end of the opening half.

An early infringement from Ian Whitten allowed Lozowski another shot at the goal in the 48th minute as the visitors once again went into the lead of 8-9 but in the 56th minute Luke Cowan-Dickie on his first outing as captain dived over at the back of a 5m line out and Joe improved it making it 15-9.

Simmonds with his second penalty goal in the 63rd minute once again stretched the lead to nine points for Exeter which proved enough despite two late penalties from Lozowski in the final 13 minutes as Rob Baxter's men completed a three-point win.