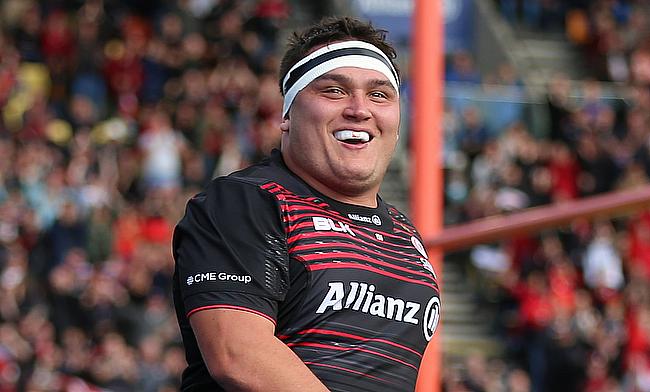 Jamie George was one of the try scorer for Saracens
©PA

Saracens came up with an eight-try performance as they trounced Brive 55-5 in the fifth round of the European Challenge Cup at Stade Amédée-Doménech.

The result meant Saracens have progressed to the knock-out stage of the competition as they finished third in Pool C with 11 points. The win also sets up a home draw for Mark McCall's men next round.

As Saracens won a penalty right in front of the posts, Owen Farrell started the proceedings with a three-pointer in the 6th minute and four minutes later Andy Christie dotted down after charging over and dived from close range. Farrell missed out on conversion as the Premiership side had a 0-8 lead.

The home side responded back in the 15th minute as Seta Tuicuvu found a space in the 40m distance and went past the Saracens defence to crossover but unfortunately that was their only points in the game. Tedo Abzhandadze's conversion went wide as the scoreline became 5-8.

The start of the second quarter saw Alex Goode made some space out wide after gathering a high ball and eventually Eroni Mawi dived over the line and at the stroke of half-time Nick Isiekwe also followed the suit as McCall's men had a 5-22 lead at the end of the opening half.

The bonus point for the Sarries came early in the second half as Mawi created the space to carry strongly to within 10 metres allowing Ivan van Zyl to score and Farrell kicked the conversion to make it 5-29. With the Saracens injecting players from the bench, Ben Earl straightaway made an impact with a 56th minute try before Rotmi Segun also went over the line in the 63rd minute after good work from Goode extending Saracens lead to 36 points.

As there was hardly any resistance from Brive, further tries from Jamie George and Ben Harris ensured Saracens went on to complete a 50-point victory and also a qualification to the knock out stage.