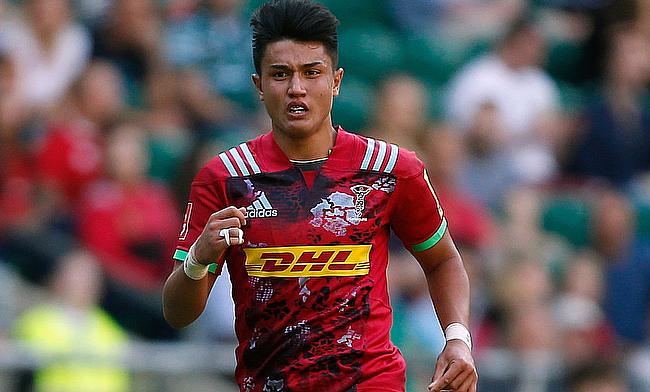 Joe Marchant Exclusive: “We don’t want to rock up and just be happy to be in the play-offs, we are going to Bristol to win”
London Irish's Premiership game against Bristol Bears cancelled
Siale Piutau to leave Bristol Bears at end of season

A stunning Harlequins comeback helped them secure a berth in the Gallagher Premiership final as they defeated Bristol Bears 43-36 in the extra time in the play-off at Ashton Gate.

Bristol made a dominating start to the game and they looked set to be the favourties to reach the final after having a 28-0 lead in the opening 30 minutes but the Quins came from behind to level the scores 31-31 in the 80 minutes. With the game entering the extra time, Tyrone Green and Joe Marchant scored their second tries to complete an exciting victory.

For Bristol Max Malins looked impressive with a hat-trick of tries but his heroics could not get them quite over the line.

Callum Sheedy started the proceedings with back to back penalty kicks in the 4th and 6th minutes before a perfect pass from Semi Radradra allowed Ben Earl to touchdown for the opening try in the 8th minute before Malins increased the lead further with their second try in the 12th minute. Sheedy missed both the conversions as the opening quarter ended with a 16-0 lead for the hosts.

Radradra looked threatening as Bristol were eyeing their third try but Aaron Morris with a interception proved to be the saviour for the Quins. The start of the second quarter saw Malins completed his double at the back of a close-range scrum and their fourth try came inside 30 minutes with Radradra and Malins combining to send Luke Morahan over. Sheedy finally managed to get a conversion right as the scoreline became 28-0.

The Quins finally managed to show some resilience when Smith sent a cross-field kick to allow Alex Dombrandt dot down just before the break as the teams finished the opening half with a 28-5 scoreline.

The visitors looked a complete different unit in the second half as they seized the momentum early when Danny Care and Smith set up Tyrone Green for their second try in the 42nd minute and seven minutes later James Chisholm also dotted down. Smith kicked both the conversions as the scoreline became 28-19.

The gap between the teams came down to four points when Dombrandt's offload sent Louis Lynagh over but Smith's conversion went wide. Bristol thought they got their first try in the second half with Harry Randall going past Green but the try was denied due to a forward pass from Radradra.

Sheedy with his third penalty in the 64th minute provided some relief for Pat Lam's side as they increased their lead to 31-24 and just when they thought they had the game, Green created the space for Marchant bringing the gap down to two points which was narrowed down by Smith's conversion as the teams completed the 80 minute play with a 31-31 scoreline extending the match to the extra time.

With 10 minutes into the extra time, Green went past Radradra and Malins to score his second but Malins completed his hat-trick few minutes later to keep Bristol in the game before their hopes came dashing with Marchant's touchdown in the final minute.