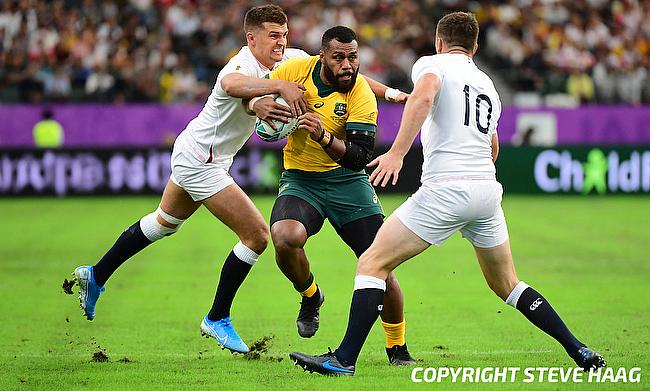 Australia survived late surge from England as they edged out England 30-28 in the opening Test in Perth on Saturday.

Australia had a late setback as Quade Cooper was ruled out of the encounter due to an injury and Noah Lolesio started at fly-half. England were awarded an early penalty chance after Australia's infringement at breakdown and Owen Farrell kicked to perfection in the 6th minute to get them off the mark.

England continued their attacking phase as a timely pass from Farrell sent Tom Curry through the gap and Joe Marchant pressed forward in the corner but Marika Koroibete put on a try-saving tackle. However, the visitors went on to win a second penalty chance which Farrell slotted to perfection to double their lead to 0-6.

Australia were handed a chance as Ellis Genge hit the deck to hand the hosts a penalty chance which Lolesio kicked in the 26th minute to reduce the gap down to three points and seven minutes later a bizarre incident saw England's Jonny Hill is sent to the sin bin for pulling Darcy Swain's hair with the latter red-carded for replying with a head butt.

With the break approaching, Australia earned a penalty at the ruck Lolesio kicked a three-pointer as both the teams completed an intense first half levelled at 6-6. Australia also had a couple of injury setbacks in the opening half with Allan Alaalatoa and Tom Banks forced off the field.

An infringement from Danny Care early in the second half provided Australia a chance to get into the lead despite being down to 14 players and Lolesio kicked the three-pointer to perfection to make it 9-6. The opening try of the game came in the 49th minute as Ellis Genge dived over in the corner at the back of a maul but Farrell missed out on the conversion. The former Englan captain made amends with a penalty goal in the 61st minute to extend the lead to 9-14.

The lead was short lived for England as Andrew Kellaway set up Jordan Petaia who rolled over in the corner and Lolesio followed with the conversion to make it 16-14. The 68th minute saw England lose Billy Vunipola to sin-bin for a high tackle on Michael Hooper and Australia became to take control as Folau Fainga'a sprung over following a maul to make it 23-14.

With four minutes left, Pete Samu grabbed Australia's third try which made it 30-14 and just Dave Rennie's men thought they sealed the game, Henry Arundell touched down provide England hope Lolesio was sin-binned for a deliberate knock on in the added minutes. Jack van Poortvliet dived over late for the red rose team and Farrell kicked the conversion but it did not prove enough as Australia edged away with a two point win.