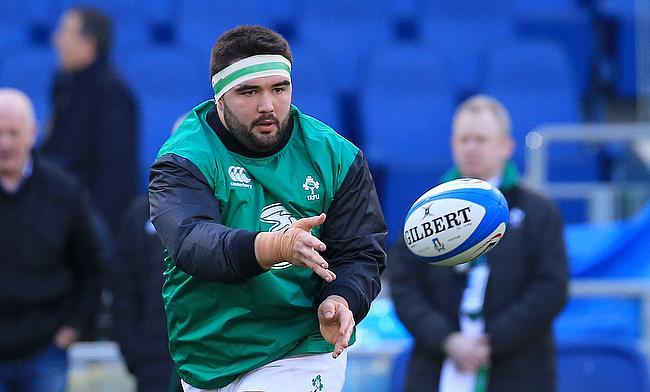 Ireland prop Marty Moore is hopeful that his stint with the English Premiership club Wasps will benefit him in regaining his place in the national squad.

The 25-year-old was sidelined for six months with a hamstring injury, which kept him out of the Six Nations tournament as well. After successfully undergoing his rehabilitation, Moore is set to join Wasps for the upcoming season and has previously played for Pro12 club Leinster since 2012.

Earlier, Ireland's performance director David Nucifora had indicated that the players featuring for the foreign leagues will have a "disadvantage" when it comes to national selection. Fly-half Ian Madigan was not considered for the tour of South Africa after he decided to switch from Leinster to Bordeaux Begles.

Despite, the uncertainty, Moore is hoping that his move to England will work in his favour.

"Ireland selection hasn't really been spoken of, with the fact I've been injured as well," Moore told Press Association Sport.

"So it hasn't come up, there haven't been chances where I've been playing and there's been a selection issue. It hasn't raised its head yet.

"But I think this is a great club and a great competition.

"And hopefully if I'm in a position where I'm playing for the club I'll be in just as good a position to put my hand up for selection internationally.

"I'm not a million miles away from Dublin at the moment. But we'll have to see how the season goes.

"I think I've just got to play my rugby week-in week-out here, and the rest is just up to who's in charge.

"I think England can maybe be viewed a little differently from France in perhaps the control, just what's expected week-in, week-out from the clubs.

"There's a little bit of that unknown with the French league at times, which isn't really there with the Premiership, especially now with the new RFU deal coming in now.

"It settles the mind a bit for coaches I think."

While confirming the signing of Moore, Wasps director of rugby Dai Young said his club will not have any issue with Moore's availability for Ireland.

The tighthead prop said he was firm on his decision to leave Leinster despite reports circulating around that the Irish Rugby Football Union tried persuading Moore to stay with the Dublin based club.

"For me it was a pretty clear-cut decision," said Moore of leaving home province Leinster.

"There was a lot in the press at the time, will-he? won't-he?, but the decision had been made long before any of that came to the fore.

"The people that mattered knew what was going to happen.

"So I think it was a pretty clear-cut decision from myself at that stage.

"Yeah I suppose I'm not young any more but I'm not old either in terms of tighthead years.

"So to go and do this at this stage will stand to me as a player, hopefully I'll have plenty more years ahead of playing."

Describing Aviva Premiership as "baptism of fire", Moore is now looking forward to take on the challenge in his debut for the English club.

"The Premiership is a tough place to be as a front-row forward.

"Every week will be a big challenge up front and I'm looking forward to testing myself and learning a few new gems I suppose.

"I think it's a baptism of fire. It's not going to happen looking at video footage, it's by having good days and bad days.

"And it's generally the bad days that stand to you more.

"You can think you're a world-beater for a few weeks and then somebody comes along and turns your world upside down.

"So it's generally those days that give you a bit of a kick and show you what you need to be better at.

"It was the same last year with Leinster and previously with Six Nations, when you're exposed to a new level or a new player it kind of opens your eyes a little bit."