Marler out for the season 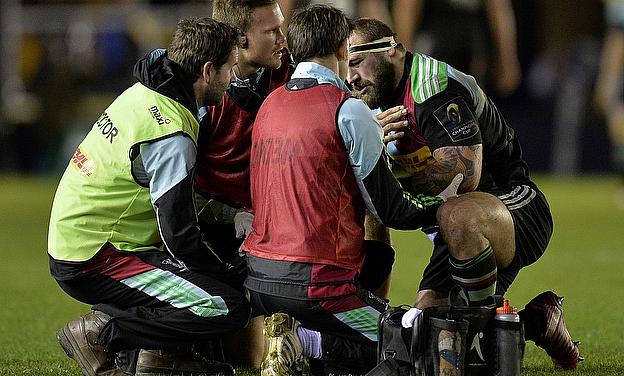 Harlequins' director of rugby Conor O'Shea announced Joe Marler has been ruled out for the rest of the season after suffering a shoulder injury but his World Cup aspirations are not in doubt.

Marler was initially named to start against Sale, a game Harlequins won 25-23, but was pulled out of the squad and O'Shea admitted that he could need an operation.

"It's not a worry for the World Cup," he said. "He came back from the Six Nations with a shoulder injury. We thought because he had this problem before that you could strengthen it, but we made the decision yesterday.

"Will he be fit for the rest of the season? No. But will he be fine for the (England) training camps? Yes.

"It's a hangover from the Six Nations and needs to be looked at. He will probably need an operation but it's only a minor one, it's not going to be something that's going to have any impact on him. We thought he could strengthen but it's not something you can mess around with."

Despite the setback of losing Marler, it did not show in Harlequins' performance as tries from Charlie Walker, Chris Robshaw, Marland Yarde and Danny Care secured a crucial victory over the Sharks.

It takes them to within one point of Sale and O'Shea believes that they produced a much better display than in recent months.

He added: "I was really proud of the boys. What you can't define is the heart of people and I thought for the first 50 or 60 minutes, you saw a Harlequins side play some really outstanding rugby and make the game something we wanted it to be.

"We had to play at a pace they didn't want to play at and we succeeded in that for 55 minutes."

Meanwhile, Sale director of rugby Steve Diamond was frustrated with another disappointing display which saw them lose their second game in succession.

"We had a very poor first half," Diamond said. "Everything we talked about in the week that Harlequins would try and do, they did.

"Fair play to them, they were away with it at half-time. The only thing we got right was that we changed the bench after 45 minutes and they made a big impact.

"Give or take a kick or two we could have stolen it but it was a fair result in the end. The pressure's come onto us and we've not responded to it which is disappointing."