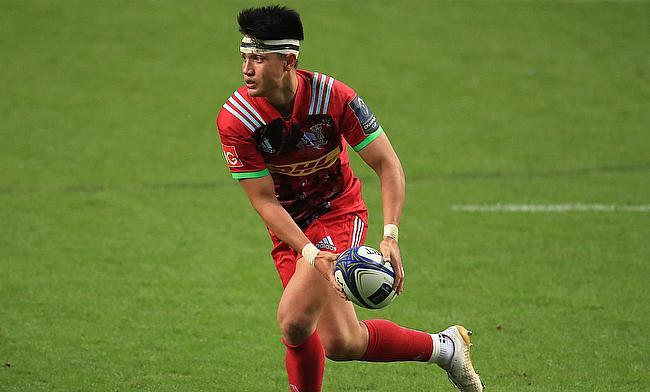 Eddie Jones was first became aware of Marcus Smith thanks to a mutual connection between the Australian and the Harlequins fly-half.

Smith’s godfather just so happens to a friend of Jones, who he met in Hong Kong and after hearing about the youngster went to Brighton College on a ‘cold and wet Wednesday night’ to watch him in action.

Two years later, Smith joined the Harlequins Academy and took part in several England camps at the tender age of 18, all whilst becoming the first choice fly-half at his club. Now with over 100 appearances in the quarters, the 22-year-old has had a fairy tale season that ended with a Premiership Final victory over Exeter Chiefs in a rollercoaster final.

It was a final that will live long in the memory, the lead changing hands on numerous occasions, Smith found out he’d be going into England camp in the hoped of finally gaining his first cap and had to stop celebrating his Premiership victory a little earlier than expected in order to get to grips with what England required of him.

“The minute I stepped into camp, I parked all my thoughts about Harlequins and I threw myself into this,” Smith said. “It’s a new group, so I tried to add some value myself and learned a lot pretty early, pretty quickly about the new standards that have been set, the way we train, and we want to play these next couple of weeks.

“I threw myself into it and I’ve enjoyed every minute I’ve been in camp.”

With @joeharvey34 at Twickenham to watch England take on the USA, learn how the game panned out between the two sides.

One of 12 players to make their England debuts at the weekend, Smith scored a try and kicked four conversions, combining well with Bristol scrum-half Harry Randall over the course of the 80 minutes.

Perhaps not originally expected to play the whole game, injury to Max Malins and then Ollie Lawrence meant that Dan Robson was forced to play on the wing and Jacob Umaga at inside centre.

Umaga made his England debut too, as did Freddie Steward who impressed throughout, as did No.8 Callum Chick, the Newcastle Falcons man going about business in his usual no nonsense fashion.

The USA caused problems throughout the encounter, their scrum at times bettering that of England, David Ainu’u and Paul Mullen both winning clashes against Joe Heyes and Ellis Genge.

England will on the whole feel as though it was the pack that struggled most, scrummaging merely being part the story as a Neal Hatley led forward pack scored directly from driving mauls om two occasions in the second half.

But for England to have ground out a win in despite of all these hiccups, it makes Smith’s quick adjustment to the England side all the more impressive. One of the later arrivals in camp because of his domestic commitments, the Manilla-born half-back having made a consistent effort to gel well with his new teammates.

“It’s always tough to come into any new environment and play with new players,” Smith said. “But one of the key things we spoke about was getting together as a group, learning off each other and being closer off the field, which allows us to have meaningful conversations on it.

“And I’ve tried to learn off Jacob, who has been in camp the last couple of weeks, about the plays, what we’ve been trying to do in attack, in defence and go from there. It has been a brilliant week so far.”

Having been able to play with complete freedom at Harlequins all season, it didn’t feel as though Smith was playing in the same way on Sunday. Launching several kicks into the West London sky, it was clear that the fly-half was playing the game plan England wanted him to, even if most of England’s best plays of the day did come from unstructured play.

“As playmakers, we’ve been given licence to play,” Smith said. “We’ve been backed as playmakers to express ourselves on the field within the game plan and the game plan today (Sunday) was to turn them early, force them to give us counterattack opportunities and then to pounce on their errors.

“I thought our kick pressure, our forwards in the first half were brilliant and put pressure on them. Freddie (Steward), Fiji Joe (Cokanasiga) and Max Malins were brilliant under the high ball, so it was nice to play off the front foot when those guys were doing their jobs well.”

An international debut is the culmination of many years effort to get to the pinnacle of rugby. Plenty contribute to players getting the opportunity to achieve their potential, parents and loved ones the first to do so, making the occasion a far bigger than just for the player.

“Ever since fans were allowed back into stadiums my family and loved ones have always been there,” Smith said. “I wouldn’t be here without them, and I owe my career so far (to them), which hopefully has many more years to come.

“It’s special to have them. They’ve supported me ever since I grew up in Asia. I had my granddad, my granny, my mum and dad, my two brothers and my girlfriend was here as well. It made it so extra special.

“It’s one of those things, I wouldn’t be sitting here without them all, so I owe a lot of my achievements to them. It was really special to see them when I was receiving the kick-off.”

An international debut that has been six years in the making was hardly disappointing. With Owen Farrell away with the British and Irish Lions and George Ford rested, Smith will no doubt have his work cut out for him if he wants to be England’s number one fly-half.

With Canada next up, it is possible that Jacob Umaga will be given the starting berth at 10, Kingsley Jones’ side possibly not the same calibre as America, it has been a bright start for Smith, but the main challenges will come in the autumn.