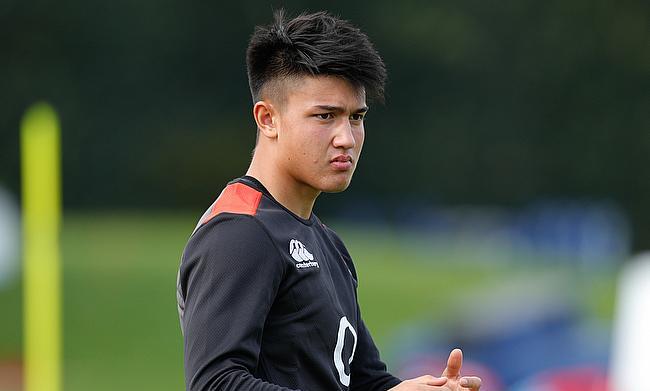 On Monday, Marcus Smith turned 23. Having begun his professional rugby career in 2017, what the fly-half already has plenty of achievements under his belt, and more headlines than most containing his name.

These past 12 months have no doubt been the Harlequins' finest to date, winning a Gallagher Premiership title, gaining his first England caps and going on tour with the British and Irish Lions in South Africa.

Speaking on Wednesday, Smith is not long removed from his Man of the Match performance in Rome, where he starred as England subjected Italy to a 33-0 defeat at the Stadio Olimpico.

A day before, Eddie Jones had announced a 25-player squad for a five-day training camp at Latymer School in London, with Manu Tuilagi having been called into the side for the first time since a hamstring injury.

Returning against Harlequins two weekends ago, the 30-year-old made an impression in West London, landing a huge hit on Smith’s midfield partner at club level, Andre Esterhuizen.

Earlier this week, Sale Sharks’ Director of Rugby, Alex Sanderson said: “There’s no one with the same bang or the same power-to-punch ratio” when talking about Tuilagi, who could offer a similar role to the one that Esterhuizen performs at Harlequins when playing outside of Smith.

When it comes to Tuilagi, Smith has some special memories of watching the former Leicester Tiger playing, attending Twickenham as an 11-year-old as England’s preparations for the 2011 Rugby World Cup continued against Wales, the centre making his debut for his country and scoring a try in the 44th minute.

“To be able to play with him (Tuilagi) is special,” Smith said. “I played one or two games in the Autumn with him, and it’s brilliant to have him back in camp.

Always insightful speaking to @jameshaskell and this week was no different.

We spoke about England, obviously, as well as how the narrative surrounding player selection should change.

“He is a ball of energy; all the boys love him and hopefully we can play together one day. He is a different player; all out centres are very different in the way they play.

“Chief (Tuilagi) is a brilliant ball carrier, but his skillset as well, is undervalued. He can pass off both hands, he can go down the line, tip, dummy, he can do the whole lot.

“As well as our other centres, they are all massive threats at the line and good carriers in their own rights.”

Another star player on that day 11 years ago was Jonny Wilkinson. Kicking two drop goals, a penalty and two conversions that day in early August, Smith has gone from a schoolboy fan of the Rugby World Cup winner to being mentored by the former Newcastle Falcons, Lions and Toulon playmaker.

“For me, it has been brilliant working with Jonny,” he said. “I have been very lucky to work with him the last four or so years and every time I meet him, I leave our session or leave our meeting with a new breath of like and he is exciting to talk to.

“He teaches me a lot; not just about rugby, but about a way of living your life, a way of being when the pressure comes on, when things go your way, when things don’t go your way, because if you can learn or control those sorts of things.

“You eventually become bulletproof, which is where he was for the latter stage of his career, and I would reckon that’s why he was so successful.”

Over the course of the opening two England games this Guinness Six Nations, Smith’s performances have been at the centre of the coverage.

Replaced by George Ford at Murrayfield, many feel as though if the 23-year-old had stayed on the field England may have won the game, and in Rome the half-back starred in a new-look backline.

Whether or not the young player is garnering too much attention is a debate for another time, but for all the headlines, social media following and having the weight of a nation on his shoulders, Smith seems largely unphased by it all.

Sitting in front of the country’s media, it’s just another day for a player that has over 100 domestic appearances under his belt, mixed it with the world’s best and is considered as the future of the game.

When asked what keeps him grounded, Smith quickly references his parents, two brothers and girlfriend for being significant influences in his life. For the majority of his life his family have followed his rugby journey, with siblings, Luc and Tomas, the first to keep Smith’s head from reaching into the clouds.

“The sacrifices they have made for me, my career, have been immense,” Smith said. “The other week, I did a drop goal, and it didn’t go above the bar and they were laughing their heads off.

?? Playing in National One
?? Going down his own route
?? Phoning his brother after training
?? Why Marcus is a student of the game

There is another Smith in town and he is enjoying his rugby at Rosslyn Park...https://t.co/ZMoAlFvAlc

“I had some messages and videos of it, and if I start getting a bit too big for my boots, my parent’s step in and tell me I am not on the right path, that I am not Marcus anymore, which for me is the most important thing, and to be true to myself.”

With Wales coming up this weekend, Smith will be in for perhaps the toughest Test of his international career to date. During the summer, Wales captain, Dan Biggar, invited Smith to his first game of cards in South Africa, duly ‘stealing’ the youngster’s money, along with other Welsh members of the squad.

Of course, Biggar won praise for his performance against Scotland last weekend. Receiving a knock early on, the 32-year-old shook off the pain to put the visitors to the Principality Stadium 20-17.

When the pair faceoff at Twickenham in a week’s time, it will be a new era in one of the northern hemisphere’s fieriest clashes. It is a match that stands out amongst all the others, and one that Smith himself was brought up on, starting with that day in London where he watched his mentor and teammate combine.

“I remember how excited my dad was to see Manu Tuilagi play with his favourite player, Jonny Wilkinson,” Smith said. “Me and my two younger brothers were there with my mum and dad. We made a good day out of it.

“The rivalry was there, and it was pretty evident, even as a young English fan. My dad told me about that growing up, and as I got older, how much it meant to him.”