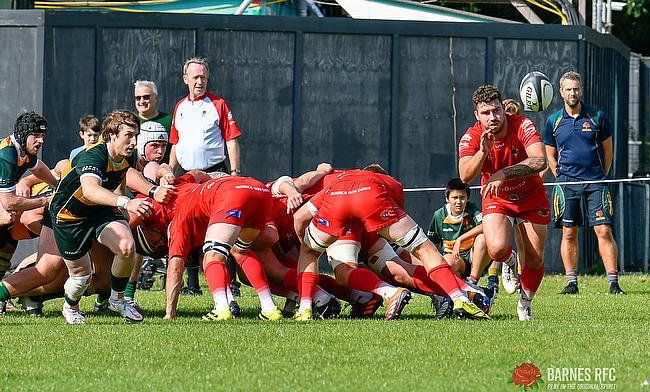 Plymouth off the mark, symmetry for Sedge and Rotherham and comeback kings in National Two South
National Leagues out to deliver once again in Round Seven
Cinderford and Sedge hit the front whilst Redruth keep pressure on
National Leagues: Heavyweight clashes steal the spotlight in Round Six

As we move into Round Eight, the National Leagues just keep on giving and there could be more edge of the seat action to come this weekend.

Cinderford last faced Taunton Titans in April 2018 and on both occasions during that season, the Foresters came away with all five points. The National One league leaders would be delighted if a similar outcome occurred on Saturday as they look to stretch their winning run to eight matches.

Taunton weren’t in action in Round Seven as they were fulfilling their bye-week and Tony Yapp’s side return to the cut and thrust of the third tier buoyed by a fairly solid start to the campaign. Three wins from six matches sees them occupy a spot in the top half of the table and included in those previous victories was a notable triumph against title challengers Rams RFC. The Titans have upset the applecart once before, so can they do it again at Dockham Road in front of the National League Rugby cameras?

In recent weeks, the battle towards the foot of National One has grabbed our attention and that theme continues in Round Eight. Plymouth Albion are a side which are slowly building and they sparked their season into life last time out. Damien Welch’s men achieved their first victory of the campaign as they beat Birmingham Moseley 34-12 to lift them off the bottom of the division and they will be hoping to follow it up against Blackheath this weekend.

Last Saturday, ‘Club’ finally found themselves on the right side of a tight scoreline as their 23-21 win over Tonbridge Juddians halted a run of three straight defeats. James Shanahan’s men overturned a 12-point deficit to claim just their second success of the term, so back-to-back victories for the first time this season could be the catalyst they are searching for.

After mentioning Tonbridge Juddians in the previous paragraph, we have decided to stick with the Kent outfit. They currently find themselves in the bottom three - alongside Plymouth and Leeds Tykes - but arguably, TJs’ performances merit a higher position in the league standings.

But that won't be a source of comfort for Peter Dankert and his players, given they have managed just one win during their maiden season in the third tier, but they could move away from the relegation places if they are able to double their tally of victories this weekend.

Caldy are one place above TJs as they prepare to meet in Round Eight, but Gareth Davies’ side are actually unbeaten in four matches. They have drawn their last two fixtures against Cambridge and Chinnor, respectively, and as their club website suggests, the Paton Field faithful can look at their campaign as either glass half full or glass half empty. Davies is very much in the glass half full corner, but he will be hoping his side can taste that winning feeling again on Saturday.

Back towards the top of National One and second-placed Rams RFC take the trip to Darlington Mowden Park aiming to keep Cinderford in their sights whilst Chinnor (4th) host Cambridge at Kingsey Road.

Elsewhere, a Sale FC side playing with confidence welcome Bishop’s Stortford to the Corpaq Stadium and Birmingham Moseley take on bottom of the table Leeds Tykes.

Whenever Sedgley Park and Hull Ionians meet in National Two North, both teams seem to be battling it out towards the right end of the division and this latest fixture is no different. Sedge travel to Yorkshire as the current league leaders after extending their unbeaten run to seven matches in their last outing.

The Tigers produced a blistering first-half performance to see off promotion candidates Fylde, but Hull Ionians will provide a stern test for the Park Lane outfit. The I’s (6th) sit six points behind Sedge, but they will be hoping for a reaction after a frustrating 14-14 draw with Wharfedale last Saturday. Can they respond to halt Sedge’s fine start to the season?

With Rotherham’s clash against Stourbridge postponed for Covid-19 reasons, Hull have an opportunity to move into the top two when they take on Harrogate. It is five wins on the bounce for Gary Pearce’s side who seem to be going from strength to strength, so their hosts might be a touch concerned when they welcome their Yorkshire counterparts to Rudding Lane.

?? We think Round 8 of The National League Rugby Review Show will be on point!

However, Harrogate have not lacked spirit and determination in their opening six matches of the campaign, but Director of Rugby David Doherty is keen for his side to turn encouraging displays into victories. Gate have only secured one win since their return to National Two North so with the home crowd behind them on Saturday, can they make it a difficult afternoon for one of the in-form teams in the league?

National Two North’s featured game of the weekend focuses on two sides aiming for their second victory of the campaign. In fairness, October has been a heartening month for Wharfedale thus far as a win over Blaydon and a draw against Hull Ionians has kick-started their season after a tough opening.

Rob Baldwin’s men travel to bottom of the table Luctonians in Round Eight, with the Herefordshire outfit also starting to find their feet this term having had two fixtures postponed due to Covid-19. They began the month with a victory at Huddersfield and certainly showed their qualities in defeat against Rotherham Titans last time out, but now they will be looking for their first home triumph as they aim to move off the foot of the division.

Worthing Raiders’ mission to maintain their lead at the top of National Two South sees them face Leicester Lions in Round Eight. The Sussex side are in excellent form at the moment and they will be chasing a fifth straight win in the Midlands.

With five minutes to go against Canterbury last weekend, the likelihood of Leicester Lions securing a fourth victory of the campaign looked nailed on only for the City Men to produce a quite remarkable comeback to leave Gareth Collins’ side shell-shocked. In his post-match comments, the Lions head coach called the result “inexcusable” so he will be demanding a response against the table toppers, despite the difficulty of the task ahead.

This weekend, second-placed Redruth will be eyeing up another victory as they look to stay on the coattails of Worthing. Nigel Hambly’s men head into Saturday with six wins from six under their belt and so far, they have only dropped two points.

However, Esher (4th) will be an awkward hurdle to get past at The Recreation Ground and Peter Winterbottom’s side will certainly be in the mood to go toe-to-toe with the hosts following their dramatic 34-33 victory over Hinckley. After three games without a win, the Eees are back on track but they could really reignite their campaign by ending the Reds’ sublime start to the term.

Worthing Raiders take on Leicester Lions away this weekend.

Henley Hawks may well have ambitions to be challenging the likes of Redruth and Esher come the end of the season, but right now, the progress Nigel Dudding’s side have made following an emotional start to the campaign has to be recognised. The men from Dry Leas have won three of their last four matches, but their only defeat in this mini-sequence came last Saturday.

The Hawks were beaten by Guernsey whilst their opponents in National Two South’s featured game of the week, Bury St Edmunds, were on fire. After shipping 49 points against Leicester Lions in Round Six, the Wolfpack hit back in some style as they hammered Barnes 63-25. Jacob Ford’s men currently occupy seventh place and a fifth win of the campaign will make sure they continue to head in the right direction.

Aside from Redruth, Guernsey Raiders are the form team in National Two South and Jordan Reynolds’ men will be seeking a sixth straight victory when they visit Hinckley on Saturday whilst fifth-placed Clifton host Westcliff looking to arrest a mini-slump in results.

Elsewhere, Old Albanian face Dings Crusaders, Canterbury head to Barnes and Rochford Hundred will be targeting a third win on the spin when they take on Barnstaple.