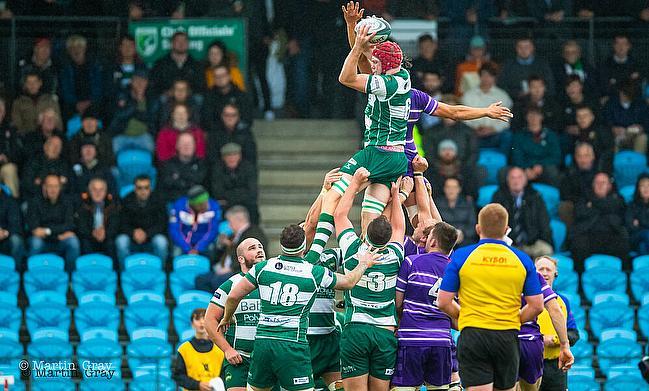 Caldy meet TJs, Hull Ionians out to stop Sedge and red-hot Redruth host Esher
Plymouth off the mark, symmetry for Sedge and Rotherham and comeback kings in National Two South
National Leagues out to deliver once again in Round Seven
Cinderford and Sedge hit the front whilst Redruth keep pressure on

It was another weekend of enthralling encounters in the National Leagues as Cinderford maintained their perfect start whilst it is getting very tight at the top of National Two North and South.

Cinderford now sit seven points clear at the summit of National One as Nathan Taylor’s hat-trick helped the league leaders to a 26-21 victory over a stubborn Taunton Titans.

Paul Morris’ side have won all eight of their fixtures this term and with fellow title candidates Rosslyn Park to come in Round Nine, the Foresters could enter November in a very healthy position.

A first-half try from Will Hendy and two from Taylor helped Cinderford lead 19-14 at the break, but only after Taunton had twice found themselves in front through Charlie Wright and Jack Walsh.

Another driving maul saw Taylor complete his hat-trick, but Wright’s second of the afternoon kept the Titans firmly in the contest.

However as Taunton pressed for the win, Cinderford stood tall and a superb defensive effort allowed them to see out the victory.

The reason Cinderford were able to increase their lead at the top of the table was because second-placed Rams RFC fell to a 29-23 defeat away at Darlington Mowden Park.

DMP fly-half Warren Seals dotted down and Morgan Passman added a second to give the hosts a 15-3 lead, but Oliver Moffitt struck before half-time for Rams.

Mowden Park were able to extend their advantage as Josh Crickmay ran in, but scores from Tom Vooght and Max Hayman left the visitors trailing by just four points.

?? The National League Rugby Review Show: Round 8@WMuggleton hosts from Cinderford as he brings you all the action from the weekend ??

However, the game-clinching score for DMP came three minutes from time as Fred Lockwood crossed the whitewash. Vooght’s second allowed Rams to depart the North East with two bonus points.

Down at the wrong end of National One, Plymouth Albion secured their second win on the bounce as they came from behind to snatch a dramatic 36-30 victory against Blackheath.

Edward Taylor and Dom McGeekie ran in tries inside the opening 10 minutes for Blackheath. While Freddie Gabbitass also landed a penalty, Albion were only one point behind at the interval after scores from James Salter and Setareki Raumakita.

It was nip and tuck in the second half with both sides exchanging a try apiece and one penalty each before Blackheath winger Howard Packman thought he had won it with his effort on 75 minutes.

But there was to be a late twist at Well Hall as Salter barged his way over from close range to steal the win for Plymouth.

Albion do remain in the bottom three after Caldy beat Tonbridge Juddians 47-40 at Paton Field. The Wirral outfit did lead by 42 points after 56 minutes - with Elliot Gourlay scoring twice - but TJs produced a remarkable fightback to leave the North West with two points.

Leeds Tykes are still at the foot of the division after Aquile Smith’s 78th-minute try stole a 33-32 victory for Birmingham Moseley at Billesley Common.

Elsewhere in National One, Jake Barron grabbed a brace as Sale FC’s excellent home form continued with a 32-24 victory over Bishop’s Stortford and Cambridge sealed an impressive 32-30 triumph away at Chinnor.

Sedgley Park remain at the top of National Two North, but they had to fend off a late Hull Ionians fightback to secure a 28-21 win.

First-half tries from Matt Gallagher and John Blanchard gave the league leaders a 12-7 half-time advantage, with Josh Britton going over for The I’s.

Eight points from the boot of Steve Collins and Ollie Glasse’s try looked to have put Sedge in control at Brantingham Park, but the hosts produced a mini-revival.

George Mewburn and James Sanderson crossed to narrow the gap to just four points with three minutes remaining, but a drop-goal from the impressive Collins keeps Sedge at the summit.

Twelve miles west, Hull’s superb start to the season continued in Round Eight as Gary Pearce’s side extended their winning run to six matches following a 25-0 victory over Harrogate.

Tighthead prop Ben Boothman scored on the stroke of half-time to help Hull into an 8-0 lead before Mike Adlard, Sam Crane and Keane Naylor all crossed in the second period.

It was another win for @SedgleyTigers on the road yesterday as they travelled east to @Ioniansrufc The Tigers remain top of #Nat2N and we caught up with their captain Matt Riley @sedgleytruck after the game. pic.twitter.com/xx2dm01Puo

The Yorkshire outfit are now level on points with leaders Sedgley Park ahead of their eye-catching clash with Rotherham Titans this coming weekend.

Fylde are only six points behind the two frontrunners after battering Bournville 73-7 at Woodlands, with Tom Carleton scoring a hat-trick.

Bournville’s only points came from Ben Tibbetts, but this was a resounding response by Fylde following their Round Seven defeat against Sedgley Park.

In National Two North’s featured game of the week, Wharfedale were able to get past the 14-men of Luctonians at Mortimer Park.

Frank Kelly was sent off for the hosts on 43 minutes, but it was a hat-trick from Rian Hamilton which helped the Yorkshire outfit secure their second win of the term.

Elsewhere in the division, Ben Haigh scored twice as Tynedale sealed an excellent 36-19 victory over Loughborough Students, Chester made it three home wins on the spin after beating Huddersfield 54-24 and Sheffield Tigers clinched a 34-12 success against Blaydon.

Guernsey Raiders are the new leaders of National Two South as Cameron Craine’s late try sealed a 19-16 victory over Hinckley.

Jordan Reynolds’ side, who are one of the newly-promoted teams this season, have now won their last seven matches and find themselves in dreamland at the top of the division.

Hinckley led 13-7 at half-time in this contest after tries from Ben Pointon and Adam Johnson, with Joe Wilson also nudging over a penalty.

Ethan Smith had gone over for Guernsey in the first period and the Raiders opened the scoring in the second 40 when Tom Ceillam dotted down.

Another three points from the boot of Wilson put Hinckley’s collective noses back in front, but three minutes from time, Guernsey produced another rescue act as Craine went over to seal the win for the Islanders.

Worthing Raiders are level on points with Guernsey but have dropped to second position after losing 17-7 to Leicester Lions.

The game was level at the break as Alex Wilcockson’s try was matched by Ken Dowding and the even nature of this fixture continued at the beginning of the second half.

Ben Young kicked a penalty to push the Lions in front before the Midlands club took control. Jake Sterland latched on to a loose ball to race over and that proved to be the decisive score as Worthing fell to their first defeat since Round Three.

Third-placed Redruth suffered their first loss of the campaign as they were beaten 34-26 by Esher at The Recreation Ground.

Harvey Scott, Dan Rowland (2) and Harri Lang all touched down as Esher took a commanding 27-7 lead into half-time.

The excellent Sam Morley converted his score to extend the visitors’ advantage, but Redruth responded with three tries in 20 minutes.

Joel Matavesi added to his first-half score before Shaun Buzza and Bailey Williams reduced the deficit to eight points.

However, it was too little, too late for the Reds meaning the top four in National Two South are separated by just three points.

Clifton and Old Albanian have the leading teams firmly in their sights after comfortable wins for both sides in Round Eight.

Brad Talbot scored four of Clifton’s 16 tries as they hammered Westcliff 106-17 whilst OAs racked up a half-century of points in a 50-27 victory over Dings Crusaders.

Elsewhere, National Two South’s featured game of the week saw Henley Hawks sneak a 25-24 win over Bury St Edmunds thanks to the boot of James Love. Canterbury played out a 20-20 draw in an ill-disciplined affair against Barnes and Barnstaple secured their second victory of the season after beating Rochford Hundred 15-13.