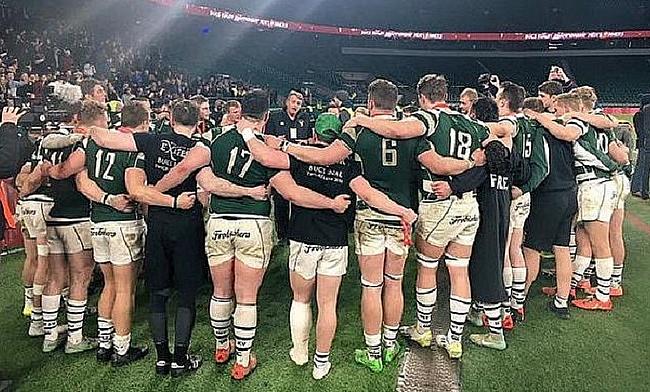 Josh Pieterse scored a hat-trick of tries as Exeter beat Durham in Rosslyn Park despite a late comeback by the northeast outfit.

The prop, who came into the side for this game at the Rock, was Exeter’s key man alongside Dom Thorne as Keith Fleming’s team went back to the top of BUCS Super Rugby.

In the Women’s Premier divisions, champions Edinburgh claimed back to back wins and Cardiff Met began their quest for another Twickenham title with a thrashing of Gloucestershire.

A full round-up of all the BUCS Rugby action is below:

A Josh Pieterse hat-trick helped Exeter remain at the top of BUCS Super Rugby as they secured their third successive win of the season against a determined Durham.

The 2016 champions fell behind as two tries in three minutes from Cai Devine and Charlie Norman put Durham in front, but a score from Dom Thorne and two from Pieterse gave Exeter a 24-12 half-time lead.

Keith Fleming’s men extended their advantage after the break as Thorne grabbed his second while Pieterse barged over for his hat-trick to secure Exeter’s bonus-point.

Durham threatened a comeback when Nick Wyman and Rory Hardman both crossed, but it was too little, too late as Exeter maintained their 100 per cent start to the season.

This clash between Durham and Exeter was played at Rosslyn Park and was billed as a home game for Durham, who selected the Rock as the venue to engage their alumni in London.

And the Durham supporters would have been pleased to see their side in action, especially after the way they started this game.

Exeter’s Ted Landray had opened the scoring for the evening with a penalty, but after strong pressure from Durham, they forced the visitors into errors and they were eventually rewarded.

Devine’s try came from a loose Exeter ball and the Wales 7s international showed a great turn of pace to dart through and touchdown.

Durham missed the conversion, but they were once again celebrating a score as Norman picked a superb line to collect Justin Clegg’s offload to extend their lead to nine points.

But Durham’s early joy then faded away as Exeter began to click into gear which was reflected by Throne’s first try of the evening. The influential Landray ghosted through the Durham defence before Sam Morley delivered the final pass to open up space for the winger to go over.

This began Exeter’s best spell of the game and they capitalised on their dominance as Pieterse dotted down following a fine line break from the impressive Felix Maddison.

Landray slotted the conversion and Exeter were really in business. It got even better for the visitors just before the break as from a loose line-out, Durham were punished by Pieterse  who provided excellent support to cross the whitewash.

Exeter were showing their true class and they did not change their tactics after the break as the foundations laid by their hard-working forwards allowed Thorne to score his second try of the evening following great work by the 10-12 axis of Morley and Landray.

Last year’s finalists had now scored 26 unanswered points and the momentum was clearly with the southwest club so it was no surprise that they built on their lead once again as Pieterse peeled off the back of a rolling maul to complete his hat-trick from close range.

It looked as though the game was over for Durham with 30 minutes still left to play, but Alex Keay’s men had other ideas.

Clegg went close following Pieterse’s try but the hosts finally got their game together and their replacements off the bench gave them fresh impetus.

Wyman and Hardman both went over to set-up an intriguing last 10 minutes, but despite Durham being in the ascendency, Exeter stood strong in defence to seal the win.

Exeter’s Josh Pieterse: We are really tired, but really happy to get the win. Durham are one of our rivals in the league and we are pleased to build on last week so onwards and upwards. We felt we let ourselves down in the first 20 minutes, but we responded well and we kept the pressure on and got some reward.

Durham Captain Justin Clegg: We really hit them in the first 10/15 minutes so we were disappointed to let them back into the game, but credit to the lads for ending so strongly to get that bonus-point. We were really trying to play and that is the brand of rugby we want to show, but sometimes we just have to learn to hold it in and we will learn from this game.

The hosts’ success came on the back of a decent performance against league leaders Exeter in Round One.

James Christie, Lewis Berg and George Wacokecoke went over for Northumbria in the first half, while Loughborough replied via a penalty try.

Alex Glashan led Loughborough’s come back after an early second half score from the home side, but both teams could only manage one more try each as Northumbria claimed the five points.

Leeds Beckett made it two wins on the spin as they beat Nottingham Trent in the Midlands.

A penalty and a score put the visitors ahead, but Trent hit back just before half-time through a converted try by Alex Crocker.

Beckett scored their second try of the afternoon soon after the restart, but a penalty from the hosts kept them in the contest.

However, two more scores from the Yorkshire outfit took the game away from Trent as they rounded of a convincing win.

Cardiff Met secured their second win of the BUCS Super Rugby season as they edged out Bath in a tight contest.

A Tom Morgan kick and a Corey Whane try helped Cardiff Met lead 8-3, but a late score by Bath gave them a two point advantage heading into the break.

Aled Ward ran on to a good offload by the forwards to score and put Met back in front and another penalty from Morgan stretched their lead.

And despite Bath searching for a losing bonus-point towards the end of this game, the hosts held on for their maiden win of the campaign.

In North A, Durham 2nds now lead the way thanks to an excellent 25-14 win at Bishop Burton while Nottingham grabbed a narrow first win of the campaign by beating Newcastle 19-18. Elsewhere, Edinburgh and Leeds completed the second week of the season by securing their first victories against Loughborough 2nds and Birmingham, respectively.

Bristol earned a second win of the season in South A by beating UWE 48-0 while Cardiff also made it two wins from two with a convincing 57-12 victory over Bath 2nds. Elsewhere, Exeter 2nds edged out Hartpury 2nds 39-30 and USW grabbed their first triumph of the campaign as they beat Swansea 31-19.

In North B, Loughborough 3rds battled to 20-18 win over Durham 3rds and now sit five points clear at the top of the table, but Glasgow do have a game in hand. Leeds Beckett 2nds waltzed to a 61-0 win over St Andrews, but there was better news for their Scottish counterparts as Strathclyde got their season up and running with a 49-10 win over Manchester.

Exeter 3rds and Cardiff Met 2nds maintained their 100 per cent records in Round Two by securing solid victories. Exeter beat Southampton 67-5 while Cardiff Met triumphed 38-22 over Portsmouth. St Mary’s also laid down a marker as they clinched a 44-6 victory of King’s College.

In-form Newcastle 2nds and Sheffield extended their 100 per cent starts to the season with professional displays in Northern 1A. The northeast side eased to an excellent 29-3 win over Liverpool while the bragging rights in the Steel City went to Sheffield as they won 10-0 against Hallam. Durham 4ths are just a point adrift of the top two as they made it successive wins by beating Hull 24-22. There was also one fixture in Northern 2A as Keele edged out Liverpool 2nds 15-10 on Merseyside.

After finishing runners-up in Northern 2B last year, Leeds Beckett 3rds began the new campaign with an 11-10 defeat at home to Sheffield 2nds. However, Newcastle 3rds are the leaders at this embryonic stage of the term as they picked maximum points in a 22-20 win over York while Northumbria 2nds came away from Leeds with a 14-5 win.

In Northern 3A, there were winning starts for Manchester 2nds and Chester as they beat Manchester 3rds (44-5) and Liverpool 3rds (24-10) respectively while in Northern 3B, there were victories for Newcastle 4ths, Leeds Beckett 4ths and Leeds University 3rds.

Leicester made it two wins from two in Midlands 1A as they beat Nottingham Trent 2nds 48-5 and there was a good result for Worcester as they came away from newly promoted Coventry with a 38-3 win while Warwick beat Birmingham 2nds 34-16. There wasn’t better news for Birmingham 3rds in Midlands 2A as they were comfortably beaten 35-3 at home to Nottingham Trent 3rds.

In the top Women’s divisions, last season’s champions Edinburgh clinched back to back victories as they beat Durham 34-5 in Premier North while Loughborough beat Birmingham 41-22 and the 2017 finalist Northumbria thrashed city rivals Newcastle 65-0.

In the south, 10-times BUCS winners Cardiff Met began their season in style with a 96-0 win over Gloucestershire, Hartpury thumped Exeter 57-5 and Oxford came away from Bath with a 10-7 victory.