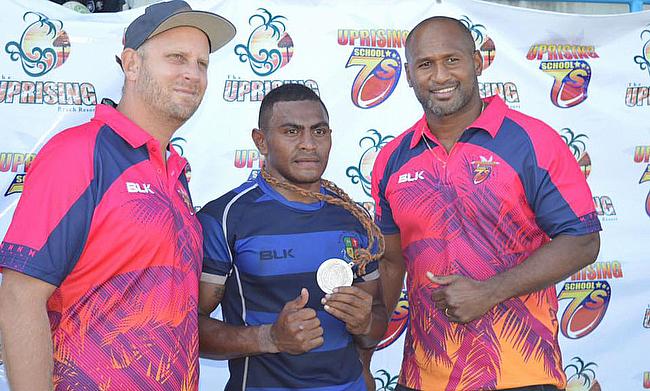 Tuqiri, a native of Namatakula, presented the Lote Tuqiri medal to Nailati Ukelele, player of the tournament at the recent Uprising Schools Sevens before being unveiled on the Walk of Fame in Sigatoka.

He then addressed VIPs and sponsors at the official opening of the tournament, which kicks off tomorrow (14th January).

"Coming from the Coral Coast it is always nice to visit home and being asked to join several legends of the game on the Walk of Fame is a real honour," Tuqiri said.

"Rugby sevens is a game that players of all backgrounds can enjoy and it really suits the Fijian flair.

"The growth of the game has been fantastic during the last ten to fifteen years and I am really looking forward to seeing sevens in the Olympic Games in Rio."

Tuqiri played for Fiji at the 2000 Rugby League World Cup before switching codes to play union, winning 67 caps for Australia.

He now joins Waisale Serevi, David Campese, Jonah Lomu, Ben Gollings, Viliame Satala and Karl te Nana on the Hollywood-style series of plaques on the main street in the town.

Serevi was also in attendance having flown in from USA.

"We are thrilled to add one of the Coral Coast's famous sons to the Walk of Fame," said Jay Whyte, Founding Chairman of the Bayleys Fiji Coral Coast Sevens.

"Lote has achieved so much in his career in both rugby union and rugby league and is an inspiration to the youngsters of his village and in fact to all the people of Fiji.

"The addition of the inaugural Uprising School Sevens, which saw the best schools team in Fiji, is a wonderful opportunity for these youngsters and it is fantastic the Lote Tuqiri Rising Star Medal was presented to the player of the tournament by Lote Tuqiri himself."

The tournament saw Lelean MS beat Tuva 17-14 in a thrilling final. Lelean reached the final by beating Lomary 17-5 in the semi-final while Tuva beat Uprising Academy 24-0 in the other semi.

The main event sees 16 teams battling for glory including the Aussie Thunderbolts and Germany, who are bidding for a tilt at the HSBC Sevens World Series and Olympic qualification.

Nevertheless, the local sides are among the favourites with Red Rock, Wardens, Yamacia and defending champions Police all former winners of the competion joined by in-form outfits Uluinakau and Westfield Dragons.

Fiji coach Ben Ryan will be watching on looking out for players to add to his national squad and the winners will claim a $FJ20,000.

Twelve women's teams will compete for the Crest Na Iri Trophy, for which the first prize on offer is also $FJ20,000.

"This year we are extremely happy to announce that we will be the first major event to have equal prizemoney for the men's and women's divisions," Whyte added.

"With women's sevens in the Olympic Games, and Fiji being a world leader in the sport, it is only fitting that we recognise the development of the game."

The Aussie Pearls are the favourites to win the women's competition, having dominated the UON Central Coast Sevens in October but they face formidable opponents in TFL Fijiana, USA Serevi Selects and NZ Raiders.

"We can’t wait to get back to Fiji and the spiritual home of sevens,” Aussie Pearls captain Gemma Etheridge said.

"In an Olympic year all the girls will be pushing for spots and the Coral Coast Sevens is a great tournament to test ourselves.

"While the games are hard, the hospitality of the Fijian people is something special and we all have some amazing friends in rugby through our previous visits to Sigatoka."

The women's competition begins on Friday (15th January) and the finals for both events will be on Saturday 16th January.

If you are outside of Fiji, watch a live stream of the tournament here - for UK viewers, tune in from 10pm GMT tonight (13th January).