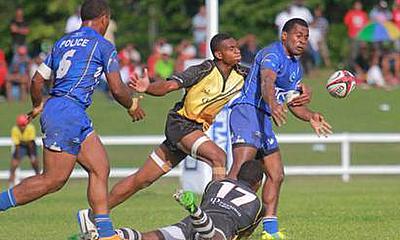 The Bayleys Coral Coast Sevens have confirmed that Fiji Water has become the Official Bottled Water of the popular tournament.

"We are thrilled to have such a great brand support the tournament for the first time," Jay Whyte, Founding Chairman of the Bayleys Fiji Coral Coast Sevens, said.

"The ‘champion of champions’ tournament is shaping up to be the best ever and we look forward to a long partnership with FIJI Water.

“The support of FIJI Water will ensure the teams are performing to their potential at Lawaqa Park in January," he added.

Fiji Water was founded in 1996 and is the leading imported bottled water in the United States and enjoyed in more than 60 other countries around the world.

Whyte believes the partnership between the two parties is an ideal fit.

"Sixteen men’s and sixteen women’s teams will contest the tournament including defending champions Police and Uluinakau, Yamacia and Wardens, all winners of local qualifying tournaments,” he continued.

“The Aussie Thunderbolts and Aussie Pearls, both winners of the UON Central Coast Sevens, and Tabadamu, champions of the Samoan Independence Sevens, have also confirmed.

“In addition, Germany, as part of their preparation for the final Olympic repechage, will make their first visit to Fiji, creating a true international event.”

The Bayleys Coral Coast Sevens will be the first major tournament in 2016, the year that Rugby Sevens make their Olympic debut in Rio.