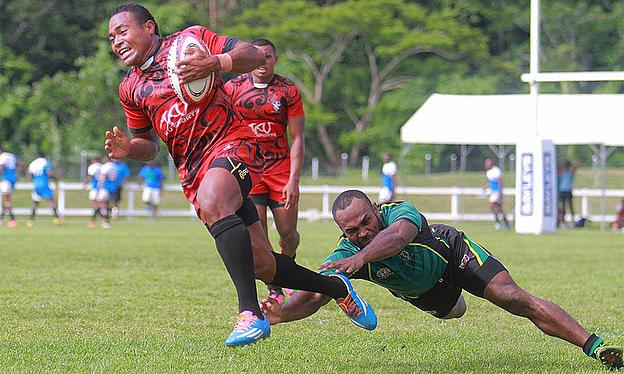 The 2013 winners struggled to get past Mana Graphix Uluinakau in their opening match, winning 24-22 in unconvincing fashion, before hitting back with a 26-10 victory over two-time champions Red Rock.

The top seeds were not alone in the off-colour stakes, with red-hot Daveta also failing to click as expected.

Fresh from a victory in the NSW Central Coast Sevens, the local Nadroga club had a shock 7-12 loss to a more committed Go Advertising Waibasaga side. They did, however, recover in the afternoon to defeat Tappoo Ratu Filise 26-14.

It was a difficult day, too, for some of the visiting teams on a picture-perfect occasion at the fifth annual tournament.

With a light sea breeze bringing some respite to the hard-working players and officials, Middlesex Sevens champions Rangataua – coached by former New Zealand Sevens star Matua Parkinson – struggled to foot it with their Pool C opponents, Wardens Green and the Davui Suva Stallions, in the size, speed and overall skill stakes.

Those factors also counted against Papua New Guinea and the Lauli’i Lions from Samoa.

Such was the closeness of Pool D, leaders Police only ended the day with seven more points than the combined totals of their opponents.

Each team completes pool play tomorrow before the Cup, Bowl and Shield competitions.

In the women’s competition, the Tim Walsh-coached Aussie Pearls were clinical in thumping Papua New Guinea 36-7 and the Lady Baabaas 55-0, while the Serevi Selects opened with a 52-0 demolition of Redlands, before ending the day with a crushing 58-0 victory over the Nadi Blazers.

Incredibly, that’s 110 points in only 28 minutes of rugby for the USA Rugby Academy team!

Local hopes Telecom Fijiana had a 33-7 win over the Highlanders and won their second match by default.

Tournament ambassador Karl Te Nana was taken aback by what he saw on a glorious day for sevens rugby.

“I’ve been really impressed by the high level of the club sides here and also the tournament itself,” says Te Nana.

“The Fijian players have really amazed me, and that’s what I was so excited about coming here, because these guys have got an opportunity to get a Fijian jersey if they perform. That’s a fantastic incentive.”

Te Nana says he had been humbled by the reception he had received at Lawaqa Park, and earlier as a Rugbytown Walk of Fame inductee, and blown away by how well the tournament stacks up against other similar tournaments he has attended.

“The whole thing has been outstanding. The fact that everything runs so well and on time makes a huge difference for the players, because you only have to worry about what happens on the field.”

Fixtures and results can be found on http://www.fijiscoralcoastsevens.com/ with updates on Facebook and Twitter. International viewers can also watch all matches live on wwww.my.tfl.com.fj