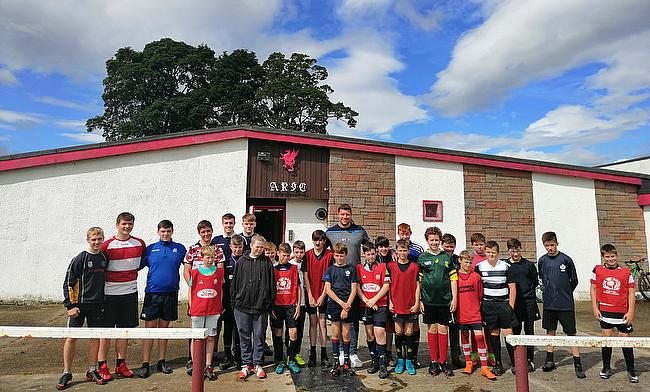 When Scotland run out to play Ireland in their Pool A World Cup opener in Yokohama City on Sunday, there will be fans up and down the country back home cheering them on.

And all of those who have a connection with Alloa Rugby Club will be keeping an extra close eye on Grant Gilchrist - and bursting with pride - should the 29-year-old Edinburgh Rugby second-row be involved in the matchday 23.

That is because Gilchrist came through the ranks at the Clackmannanshire outfit whose first XV currently ply their trade in Tennent’s Caledonia Region League Division One.

“It was myself, Henry Edwards and Grant’s dad Tommy who started up the minis P4 team that included Grant at Alloa RFC back in 1997, so we were his first coaches on his rugby journey,” Jess told TRU.

“Grant has always held Alloa RFC in his heart. His grandad played here before Grant was born and his Dad and Uncle both played for Alloa as he was growing up. Indeed, Grant even managed to play in the same Alloa first XV as his dad at 17.

“Fast forward to this year and myself and Henry ran our first ever Summer Camp at the rugby club in August.

“During our preparations for the camp, we spoke to Grant and the other well-known players who have come through the club, the likes of Glenn Bryce, Kevin Bryce, Stuart Edwards and Sean Kennedy.

“Grant was the first one to offer to come down and see the youngsters and on the first day of the camp he arrived at the rugby club.

“He talked to the kids and answered their questions. Grant managed to easily relate to the kids telling them that he’d sat on the very bench, in the same dressing room that they were in now and that myself and Henry had been amongst the coaches who had guided him through his early years as he was introduced to rugby.

“That definitely caught the attention of the kids present, knowing that someone from Alloa, stood before them, had done exactly as they were doing now and had then gone on to do so much in the game.

“For many present, I think it was a first realisation that ‘hey, anything is possible’.”

Gilchrist, who is one of four second-rows with Scotland in Japan along with Jonny Gray, Ben Toolis and Scott Cummings, has 36 caps to his name and played at the 2015 World Cup.

Then his involvement was cut short by injury, but he was a star performer in Scotland’s warm-up games this time around and is at the peak of his powers.

He also left the Alloa youngsters with a number of powerful messages.

“Grant talked to the kids about just going out and enjoying rugby or any other sport they may be involved in,” Jess continued.

“He explained that things are not always going to be ‘highs’ and that along the way there will be ‘lows’ and stated that he had a huge low in rugby when he broke his arm just days after he’d been named captain of Scotland for the Autumn tests and due to complications, missed a large part of the next two seasons [2014/15 and 15/16 were tough for him].

“However, he told them how his setback had just made him more determined and delivered a powerful message to the kids that no matter what level of rugby they play, you have to have the attitude that it is there to be enjoyed.

He said ‘if you can’t enjoy it, then you won’t perform to your best’.

“We definitely saw an immediate uplift in the enthusiasm that the kids put into the rest of the summer camp, even during the final day which was wet, soaking and dreary the kids couldn’t wait to get outside and play rugby.

“The kids have watched Grant in the recent warm-up games and were delighted to see him picked for Japan.

“With over 20 years coaching experience behind me, I really do feel it Grant’s chat with the players has been a factor in how they have played their rugby early this season with freedom and smiles on their faces.

“It has been awesome to watch I have to admit and we will all be cheering Grant on when the tournament starts.”