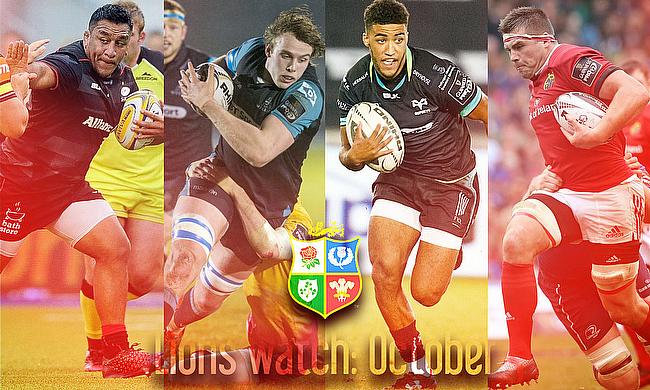 We started our focus on the upcoming British and Irish Lions tour to New Zealand last month, looking at the varying fortunes of players potentially in the Warren Gatland’s sights during the month of September.

Lions stock watch is now back for its October edition, a month which saw the best sides in Europe go head-to-head and gave us the best indication yet as to who has what it takes to head south in the summer and take on the All Blacks.

Here is who caught our eye in the opening rounds of European rugby, as well as two rounds of the Aviva Premiership and Guinness Pro12.

If the story of Vunipola’s 2015-16 season was the improvements he made to his scrummaging, the story of his 2016-17 season, so far, has been the efficiency of his play in the loose.

Not only is Vunipola making metres every time he gets his hands on the ball, he is also playing with the verve of a bona-fide playmaker. Whether he’s showing and going, putting players through holes or sidestepping, Vunipola has taken his ball-carrying game to another level this season.

Gatland is a known admirer of the loosehead, so his place on the tour feels fairly secure right now, but his play of late may be elevating him to a potential starter.

Gray was one of the few Glasgow players to come away from their mauling at the hands of Munster, in an admittedly very difficult game, with any kind of credit. Combine that with his top-drawer performances from previous weeks and Gray is a making a concerted push on the congested Lions engine room.

Excellent at the set-piece, tireless in the loose and an emerging leader, Gray has everything required to be an extremely valuable tourist this summer. In fact, the only thing working against the Scot in his bid to be on the plane is the amount of talented locks Gatland has to choose from.

The November Tests and a Champions Cup double header with Racing 92 in December will go a long way to firming up where Gray sits in the home nations’ second row pantheon.

The Ospreys may be competing in the Challenge Cup rather than the Champions Cup, but that shouldn’t detract from Giles’ lethal finishing of late.

The 19-year-old scored five tries in his two European outings in October and showed all the speed, acceleration and instincts for the try line that separates good wingers from potentially great ones. He then added a brace the following week when the Ospreys met the Dragons.

Giles was called up to the senior Wales squad earlier this year and though he didn’t go on to win his first cap in New Zealand, he will be on Rob Howley’s radar for the Six Nations next year, especially after being asked to train with Wales this month. If Howley doesn’t reward him with a cap, however, Giles could be the archetypal Lions bolter next year.

The impact that Stander has on Munster and the consistency with which he plays means that he has to be in consideration for the tour, despite Gatland having two of the best in the world at his disposal in Billy Vunipola and Taulupe Faletau.

Stander has helped lead Munster through an extremely tough month and has not let it affect his game in the slightest and if anything, the South African-born forward has risen to the occasion and elevated his performances to an even higher level.

That said, Vunipola and Faletau will both surely tour if fit and Stander may have to convince Gatland he can compete for the starting six jersey if he is to also board the plane next year.

Hookers outside of England

It may seem a rather pro-English thing to say, but it’s a hard statement to argue against at this point in time.

The trio of Jamie George, Luke Cowan-Dickie and Tommy Taylor have all been excellent in the month of October, as well as September, and though Dylan Hartley has been injured for much of that time, he is one of the favourites to captain the Lions in New Zealand.

There have been moments from Sean Cronin, Rob Herring and Fraser Brown, but nothing so impressive, nor with the required consistency, to put themselves above those four in Gatland’s pecking order. Throw into the mix the fact Gatland is a fan of Tom Youngs and there is a very good chance – at time of writing – that the Lions hookers will all be English.

Exeter’s up and down start to the season is not helping any of these three push their claims, nor is the fact that Rob Baxter still does not seem to know his best midfield combination.

Slade is probably the most prominent Lions candidate from this trio, but both Hill and Devoto could have claims with decent campaigns under their belt.

Until Baxter and co work out their favoured combination and they get to string several games together and develop chemistry, these three are going to struggle to put their names up there with the Jonathan Josephs and Robbie Henshaws of home nations rugby.