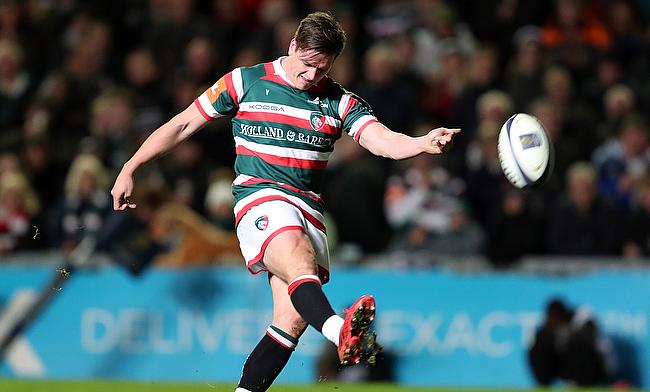 Adam Thompstone's try and 11-point contribution from Freddie Burns helped Leicester Tigers reclaim the fourth position in the table with a 19-11 win over Northampton Saints at Welford Road on Saturday.

Northampton Saints was dealt a major blow in the second minute of the game when centre Luther Burrell was sin-binned for performing a high tackle on Leicester Tigers' fullback George Worth.

Minutes later, wing Thompstone strolled past the line while Burns scored a penalty and a conversion on either side. Thompstone's joy was short lived as he was yellow-carded four minutes later for tackling George North in the air.

With Leicester down to 14-men, Mikey Haywood capitalised on it and helped Northampton Saints score their first try in the game while fly-half Stephen Myler added two more penalties as the visitors trailed by two points at half-time.

Even though, Northampton Saints put on a terrific defence display in the second half, Leicester Tigers managed to score two penalties and ended the game with an eight point victory.

Leicester director of rugby Richard Cockerill described the first half performance as "untidy" despite the early try. He also lamented referee's decision on Thompstone's sin-bin call.

"It's a great win. It was messy, a bit untidy after we got a great start, a good lead.

"We put a huge among of pressure on in the second half. We were unlucky with some of the decisions around how they defended their goalline, but that is life. But we are happy to send them home with nothing.

"I thought Adam was unlucky to go to the sin-bin, but not sure the referee had many other choices.

"The ball bounced awkwardly, Adam turns and North is competing for the ball so he jumps on top of Adam and ends up getting tilted. It is a difficult one because everyone gets sensitive about it - the crowd cheers, everyone rushes in and the referee blows his whistle nice and loud and suddenly it is a big problem.

"That turned the game a little bit, they go to the corner and it is 10-7 and we gave them some oxygen with a man down."