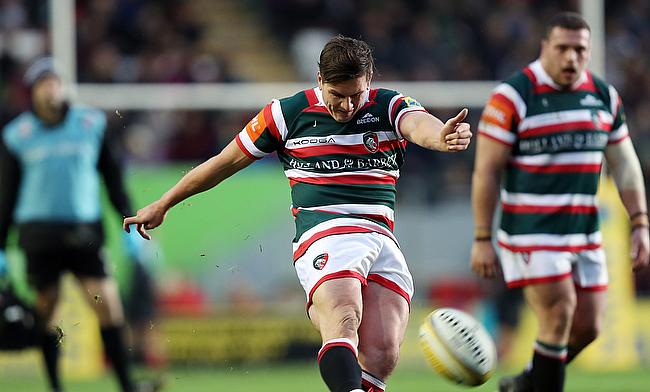 Freddie Burns excelled with the boot for Leicester
©PA

Fly-half Freddie Burns contributed with 20 points as Leicester Tigers outclassed Harlequins with a 25-6 victory in their Aviva Premiership game at Welford Road on Sunday.

The first half was closely contested with Harlequins fly-half Nick Evans and his counterpart Burns kicking two and three penalties respectively allowing Leicester Tigers to have a slender three-point lead over the visitors.

However, the visitors came up with a spirited performance in the second half in wet conditions at Welford Road that took the game away from the Quins.

Burns kicked a penalty and followed it with a drop goal in the first eight minutes to stretched Leicester Tigers lead to nine points while Owen Williams scored the only try in the game few minutes later with the fly-half adding the extras to increase the gap to 16 points.

With Burns in full flow, Leicester Tigers reached 25 points following his penalty in the 62nd minute while Harlequins failed to add any point in the second half.

The 69th minute of the game saw both teams temporarily reduced to 14-men when Michael Fitzgerald was sin-binned for a tip tackle on James Chisholm, who was also yellow-carded for his reaction to the incident.

The 19-point win allowed Leicester Tigers to reach the fourth position in the table while Harlequins are at eighth.

"The first half was a bit flat. We were playing within ourselves and we needed to up the ante a bit.

"In the second half we took the game to them and controlled Quins well and they did not look like posing a threat.

"The forwards were better and we carried the ball better.

"There was more urgency and if we can get that every week we will be in the mix because we have some good players."