Wasps head coach Lee Blackett: Rugby without fans is nothing 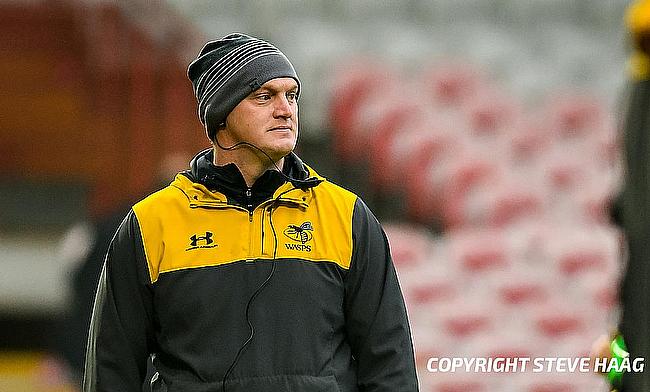 Exclusive: Gloucester’s Freddie Clarke on his 100th appearance, responsibility and playing Bath
Edinburgh considering moving 1872 Cup match against Glasgow Warriors
Boxing Day fixture between Leinster and Munster postponed due to Covid-19
Steve Borthwick knows how far Leicester have come - The challenge now is to sustain it

Wasps head coach Lee Blackett feels the Gallagher Premiership need to consider pushing the pause button on the season if matches are forced to take place behind closed doors.

From Boxing Day, games in Scotland and Wales will be played in effectively spectator-free stadiums due to the rising cases of the Omicron variant of Covid-19.

Clubs are keeping everything crossed that their festive fixtures will go ahead, with Wasps taking on London Irish on Sunday, whilst Harlequins have reportedly sold over 70,000 tickets for their ‘Big Game’ clash on December 27th against Northampton Saints at Twickenham.

There is still the possibility the government may introduce tighter restrictions after Christmas, but Blackett hopes the pandemic will not disrupt their upcoming games.

“I don’t think anyone wants three or four weeks without supporters,” Blackett said. “If that is the case, we’ll have to look at a circuit-break. From my perspective, that’s where I’d want to go as everyone needs supporters in from a player/coaching side as players play better with them in. It is proven that the intensity of games is higher.

“If we can have that little break, and then we might have to play midweek, it would be for the best interests of the club financially and for the players as well. Everyone wants to play with supporters. That’s the selfish perspective. Everyone sees that, as it’s a better spectacle for sport and for TV.

“[A circuit-breaker] is my personal view. I just think it’s the best thing for the game. I can’t imagine clubs are going to say, ‘Let’s play three weeks with no fans.’ If we had to take a three-week break without fans I’m pretty sure everyone would be on the same page.”

Stadiums are well tested in Covid controls and the process of checking LfT and Covid passes should give confidence to fans. Boxing Day @ashtongatestad @BristolBears v @LeicesterTigers pic.twitter.com/dtf7btrkVt

As Blackett alludes to, the financial implications of playing matches in front of no fans will naturally be a concern to clubs, a sentiment that was echoed by Bristol Bears boss Pat Lam earlier this week.

The West Country side are preparing to face league leaders Leicester Tigers on Boxing Day and their clash at Ashton Gate will be their first match since December 3rd.

The Bears’ two Champions Cup fixtures were postponed so Bristol have already felt the impact of Covid-19 both on and off the field, with the club reportedly losing £300,000 after their home match with Scarlets was called off.

Lam was asked whether the Premiership would survive going into another lockdown and he said: "I don’t think so. People look at us and think ‘they have got Steve Lansdown, a billionaire’, but what people tend to forget is we don’t have what Steve is worth. Steve has spent in his time here close to £80 million of his own money into Bristol rugby and that is a lot of money.

"You have to be asking questions as you go through. What do we get for winning the Champions Cup? What do you get for winning the Premiership? The last few years recognise, as a team, we have brought in a lot of revenue and our revenue has gone up, but as far as central funding, as far as the TV deals, everything, that is having an effect. Every person involved in rugby is asking the question: ‘What does it look like?’"

"Everyone says ‘the English game has the most money’. The reality is there are a lot of wealthy people who are losing money. I don’t mean to be all doom and gloom but this is not as cosy as people think, but the on-field product is excellent.

"I am pretty sure PRL (Premiership Rugby Limited) will be talking to the government. The decision by the Premier League to keep going was an important one for rugby as well."