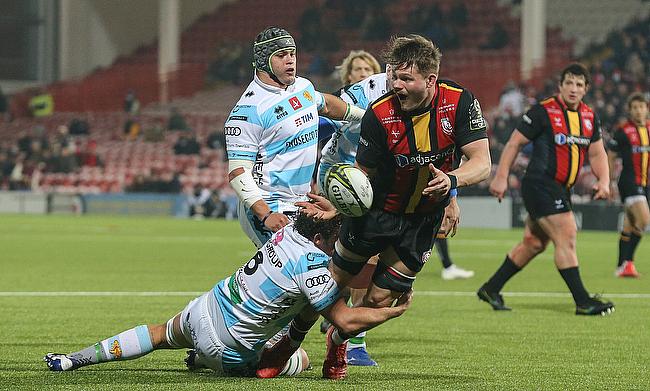 It was in front of a packed-out Kingsholm where Freddie Clarke made his 100th appearance for Gloucester.

Joining the club in 2016 as an academy player, the 29-year-old has found himself as one of the most important cogs in George Skivington’s machine so far this season.

Having represented the University of Bath in BUCS competition before spending a season with London Scottish prior to moving to Gloucester, his centenary appearance is recognition of a lot of hard work that went on behind the scenes.

When handed his Gloucester cap to commemorate his achievement, the club’s captain, Lewis Ludlow, certainly knew how to get a chuckle out of all within earshot. Describing Clarke as a ‘competition winner’ and the ‘oldest academy player ever’, the bond between the pair and the rest of the playing group was clear to see.

Even the lead up to that 27-10 win against Bristol Bears was filled with moments that wouldn’t have seemed out of place in a sitcom, Clarke not even aware that his 100th appearance was on the way until Jack Singleton pointed it out to him.

“I knew I was close,” he said. “They used to have your appearances on the club website, but they took them off. I was going to message our kitman (Shaun Bullock) because he knows all our stats, but I didn’t.

“The team got announced. I was sat having lunch and Jack Singleton came up to me and said congratulations. I actually thought he was taking the piss, so I asked him what he was on about. He told me it was my 100th game and I just thought that with it being against Bristol on a Friday night, it was almost as if I’d planned it.

“Gameday came, we did our warm-up, came back into the changing room and Luds (Lewis Ludlow) came up to me and said I could lead the team out. I was thinking he might ask, but I wasn’t going to. That’d be writing my own story there.

“I led the team out. I remember running through, getting clapped and knowing everyone was looking at me. I had to look reasonably hard, ready to play whilst taking it all in. I looked over my left shoulder and the rest of the boys still weren’t out yet.

“I thought Luds was taking the Michael out of me, seeing how long they could leave me out on my own, but it turned out the guy from BT was saying to leave me out there. I still remember when I made my debut, and I didn’t think it could get much better than that.

“To still be here now and have played 99 more times for the club is awesome. I like to think I can remember every game I have played, but I can’t, so I must be a seasoned pro! Everyone is saying it is my breakthrough season.”

Having played 10 games so far this season for the Cherry and Whites, the versatile forward has often found himself in the second-row this term. Usually deployed across the back-row, Clarke has been virtually ever-present as the team has largely put last season’s 11th place finish to bed. 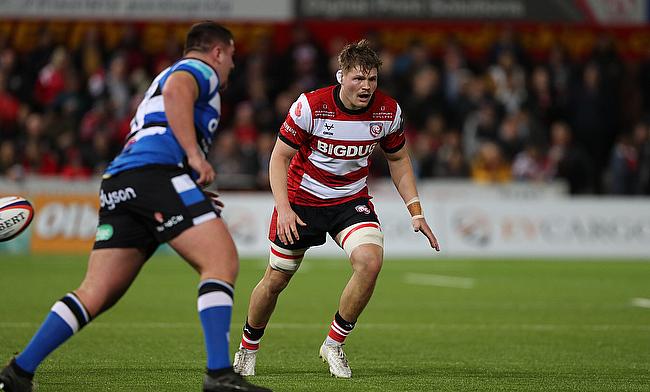 His move to the engine room has come partially due to Ed Slater and Alex Craig having been injured, and he has combined with Matias Alemanno to make the Gloucester pack one of the more beastly propositions for any opposition that faces them.

There is also a continuity that wasn’t present last season either, with Ben Meehan, Adam Hastings, Mark Atkinson and Chris Harris regulars in the backline. In addition to this, Clarke says despite indifferent losses to Northampton Saints and Leicester Tigers at the start of the campaign, the coaching staff stuck to their initial plan.

“If I am honest with you, I wouldn’t put it (form) down to anything specific about how things have changed and how momentum has gone,” Clarke said.

“Against Worcester, I think that was the first game where our set-piece started to flourish. We have hung our hat on that a lot, and when our maul is going well – whether we get a try, penalty try or a penalty advantage – we just play with so much freedom. We have a good core to the team that hasn’t really changed.

“You’d think that because we do well at the lineout, we don’t do as many (in training), but Skivs (George Skivington, head coach) is very diligent in the fact that we have to do a certain amount of mauls, a certain amount of scrums, just to tick every box because one thing every team is aware of when they are winning games is complacency.”

When it comes to the lineout, Clarke has stepped up to that particular set piece. Having largely been used as a dynamic ball-carrying back-row – his stepping skills on show against Treviso last Friday night – the 29-year-old has primarily run the team’s lineout, a task he has found engaging at this stage of his career.

“I have loved that responsibility,” Clarke said. “It has completely changed my whole dynamic of how I look at rugby, how I prepare for games.

“In previous years when I have found myself in the team, it has been on the bench. Whether that be in the second-row or back-row, I’d get my shot occasionally, but I’d be rotated out after a couple of weeks whether that be because of a good performance or not.

“With the amount of injuries we had at the start of the season, lineouts sort of fell to me. My whole Monday and Tuesday are centred around learning keys, body movements and all of our calls. I actually love it.

“It is probably not for me to say, but as the weeks have gone on, the boys have probably noticed a difference in my understanding, my knowledge and my detail.”

Gloucester play local rivals Bath this Boxing Day, the hosts no doubt hopeful that they will be able to pick up their first victory of the season. Stuart Hooper’s side are winless up to now and they have already outlined their changes which are coming next term.

Current Munster head coach Johann van Graan’s arrival for the 2022/23 campaign was announced last week, and in the boardroom, owner Bruce Craig will step down as chairman at the end of the year with former Saracens chief executive Ed Griffiths taking over the reins.

Blue, black and white is a more than familiar sight for Clarke, who represented the Somerset club in the A-League across the 2013/14 season and the side won the competition that year. Playing most of his regular rugby for the University of Bath, Clarke also represented Talking Rugby Union’s Red Panda Sevens when not captaining England Students or playing for GB Students in Brazil.

“When people ask me ‘what was your affiliation with Bath?’, I always say I was a student first,” he said. “I was part of a team that won the A-League, but when I say I was part of the team, I was very much a small part of that.

“I may have started one game and then got five or 10 minutes after that throughout the season. I love Bath as a place and the club was great to me at one point, but I was always treated as a bit of meat, coming in when I was needed.

“They never gave me a fair crack, but uni was great. They (University of Bath) developed me, probably more on the field than off the field, but it allowed me to still pursue a career in professional rugby.

“I was fortunate enough to play for Students and to do the sevens stuff, which helped me put my foot in the door and add to my rugby CV and gave me a crack at London Scottish.”

Gloucester have already come face to face with Bath once this season, the two teams playing out a Premiership Rugby Cup encounter at Kingsholm in mid-November. It is a game that won’t be remembered for Gloucester’s brilliance but instead for Bath’s 71-10 collapse after putting out a weakened side.

Starting in that game, Clarke will possibly be ruing the fact he didn’t score one of the 11 tries in that game, but even though he is on opposite sides now, the 29-year-old must have felt some spark of consolation for his former teammates Charlie Ewels, Tom Ellis and Tom Dunn.

But such emotion has been put to one side yet again as the forward hopes to mark the end of the Christmas week on a high.

“I haven’t really watched many of their games, so I don’t know what they need to be working on,” Clarke said.

“We played them in the Prem Cup, and the whole week it was built up as a derby, and at the end of the day, whatever team came out, it was a derby and Gloucester fans are extremely passionate about putting one over Bath.

“Our mindset has been that focus for this weekend, and it has been a challenge with what Covid is at the moment, and around Christmas, it is probably so easy for boys to take their foot off the gas 10 per cent or 20 per cent.

“It sounds a bit dull saying’ team first mentality’, but that sort of is it because we do love the games on Boxing Day, but you have to make a big sacrifice on Christmas Eve, Christmas Day and on New Year’s Eve.”