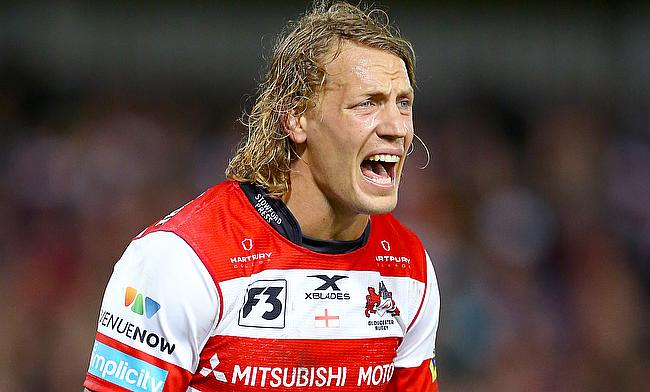 Gloucester kick-start Gallagher Premiership with 27-16 win over Northampton
Banahan: 'Moving to Gloucester is a reboot for me'
Gloucester lock Tom Savage sidelined for 10 weeks with knee injury
Gloucester name Danny Cipriani in line-up for pre-season friendly game against Dragons
Trinder: “If I can play well for Gloucester and keep pushing forward, then I will see what happens.”

Matt Banahan scored a late try and Billy Twelvetrees was spot on with the conversion as Gloucester managed to snatch a 31-31 draw against Bath in the second round of the Gallagher Premiership at Recreation Ground on Saturday.

This was also Banahan's first game against Bath - the club he represented between 2006 to 2018 before he made a switch to Kingsholm ahead of the ongoing season.

The result has taken Gloucester to seven points as they move third in the table while Bath are positioned 10th with four points.

Danny Cipriani set the proceedings for the Cherry and Whites with a superb pass to Ruan Ackermann, who crossed over in the 15th minute followed by a conversion from Twelvetrees.

The lead tripled for the visitors with the second try from Ackermann in the 26th minute and Callum Braley followed the suit eight minutes later. Twelvetrees added the extras on both the occasions as Gloucester scored 21 unanswered points.

Just at the stroke of half time, Semesa Rokoduguni lifted the spirits at the Recreation Ground when he went over the line in the 40th minute that was improved by Freddie Burns as the teams went into the break with a 7-21 scoreline.

Todd Blackadder's men extended their momentum in the second half as well when Tom Dunn crashed over the line and Burns' conversion got the gap down to seven points. Dunn was instrumental in Bath's comeback as the home side went on to level the scores his second try in the 64th minute. This time Rhys Priestland got the conversion right.

As the final 10 minutes kicked-off both Twelvetrees and Priestland traded penalties and Elliott Stooke helped Bath gain the bonus point also a vital lead in the game with his 74th minute try but with three minutes left in the game Cipriani once again floated an excellent pass to Jason Woodward, who in turn sent Banahan over the line and Twelvetrees kept his nerve in kicking the crucial conversion to end the game 31-31.