Josh Beaumont Column: "I think the game is continuing to mirror society when it comes to discussing mental health" 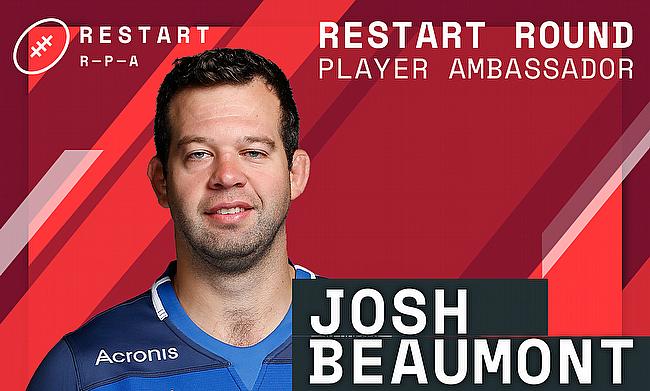 Josh Beaumont highlights the importance of the RPA's Restart Rugby Weekend plus he looks ahead to Sale's Champions Cup quarter-final and discusses why there are reasons to be positive about rugby in the North-West.

I am going to begin my latest column by focusing on the upcoming Rugby Restart Weekend.

I was an RPA rep for four seasons. When you are in those meetings and you see what a fantastic job they do for current players and past players, you see its importance. It is a broad scope of topics where they can help out whether that be in mental health or helping you through career-ending injuries, and that is just two examples.

They play such an important role for the players that need it and to be honest, it is hugely comforting for us as players to know that there is something there to help at all times.

Support our players this @RestartRugby Round.

Bid in the online auction, buy a raffle ticket, grab your own Restart Weekend t-shirt or simply donate here ?? https://t.co/fnkCeGCYrl

Having been through tough times myself with injuries, it is crucial these services are available to us. A couple of years ago when I did my knee injury, those thoughts of whether you are going to make it back do creep in so having those services there meant a lot. I was constantly speaking to the RPA and my player development manager and it was nice to know you had some support there.

Obviously you have that support from your club but in a way, it is nice sometimes to speak to someone who is not actually from the same environment as you just to get that different perspective and help you take your mind off things a bit. It is something which is very close to my heart and I want to try and support Restart Rugby in every way I can.

There are some quite scary stats out there about mental health issues when players finish their careers. It shows it is quite difficult to make that transition and if that has been caused by an injury, it is really tough for players to deal with so as I say, it is great that support is there for us through the RPA.

A lot of players at Sale did a mental health first-aid course last year. The education side of this is important because it does help you recognise the signs if your teammates are struggling. From the start of my career 10 years ago, there was that traditional mindset in rugby where you just 'get up and get on with it' whereas now, I think the game is mirroring the whole of society which is great.

I think we are much more aware of it now and that is only a beneficial thing because it can allow people to feel more comfortable when opening up to talk about things.

That is being encouraged now, certainly at Sale, and I'm sure that is the case across the whole of the sport. Away from that professional level, people might have problems going on off the field with their jobs or whatever it might be. These guys and girls do spend a lot of time at clubs because they are training twice a week so you get to know people well so it is important it is being talked about. If people understand it more and feel more open to talking about it, it can only be a good thing.

We have been saying it for a while that it is kind of like a 'cup final' mentality most weekends for us, especially now! I think the game against Bristol in the Champions Cup away, that performance came at a really good time because we probably needed that bit of confidence to lead into this final portion of the season.

We have got the excitement there of the quarter-final against Racing, but we can't lose focus too much because if we don't get a result in the Premiership, it might knock our confidence and we still want to finish as high as we can.

There is plenty for us to keep us excited. I think Al [Alex Sanderson] said after the last game it is a good thing to have a lot of excitement coming in towards the end of the season so that alone is enough of a motivational factor for the lads.

I think the week off [following the win in Europe over Bristol] probably came at a good time as well to freshen everyone up. We have a few guys coming back from injury so we are in a good position, squad-wise, for the run-in. Guys are fresh and ready to go and it starts with Friday against Newcastle and hopefully a big performance at home because I think that first-leg against Bristol won't be remembered fondly by many! We want to put that right and give something for the fans to cheer about!!

With everything that is happening with the salary cap, I think there is going to be a lot of chopping and changing this summer. It is a shame to lose the likes of Faf [De Klerk] and Lood [de Jager] and the other lads that are moving on, but if you look on paper, we still have a strong squad for next year.

I think what the changes to the rules will do is open up more opportunities for more English guys to come through. Raffi [Quirke] has probably shown what he is capable of both on the domestic and international scene so we have got a pretty exciting player to come in and fill Faf's shoes.

But something I think I have spoken about before in my columns is there is a lot of talent in the North-West. Sometimes in the past a few might have slipped through the net, but we now have a good crop coming through and they will be given their chances along the way. There are some very talented players there and I have watched quite a few in the U18s this year and that is exciting.

"This is my childhood club. To find our way to @Champrugby with all my mates is just fairytale isn't it?"

?? @CaldyRFC reflect on back-to-back league titles as they prepare for life in the second tier

There is no reason why these guys can't be the next Curry's and play 150 games inside the first four years and then also get international honours as well!!

These lads might learn their trade away from Sale to begin with and I benefitted from my time with Fylde. I think it takes at least two or three years to kind of develop physically and play at a Premiership level so the pathway is there for them to take that next step.

If you look at last Saturday's match between Caldy and Sale FC in National One, I think that highlights this topic perfectly. Two North West clubs which allow players to develop both on and off the pitch, whilst competing for a place in the Championship. I think you can definitely see how that level of rugby has benefitted guys who have joined local clubs on loan then come back to us and that is only a positive for everyone involved.

Caldy have probably had more stability in their squad over the years so it is nice they have had the same core of players and achieved what they have achieved. Elliot Gourlay has played there all year from Sale so it just shows if the next crop of lads can go out and play at your Fylde's or your Preston Grasshoppers' for example, they can really benefit from their time out on loan like Elliot has done.