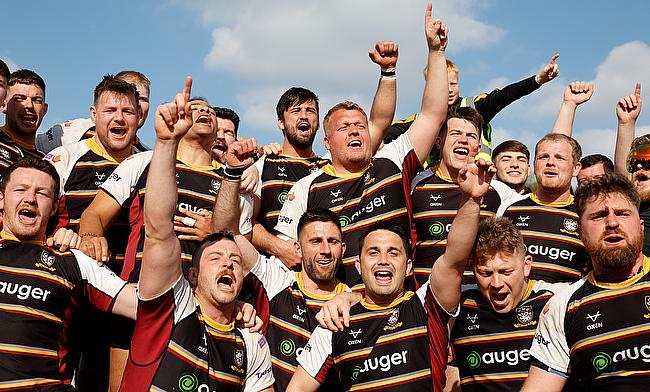 On the edge of glory: A weekend to savour in the National Leagues
Caldy & Sale FC grind out results to set up showdown, Hull on the brink and Redruth keep title dream alive
Easter weekend set to be a treat as teams look to avoid cracking under promotion pressure
TJs steal it against Tykes, Field dent Titans tilt, Clifton and Worthing play out pulsating draw

Caldy and Hull both create history by gaining promotion whilst Esher and Redruth take National Two South title race to the last day.

Caldy created history as they secured promotion to the Championship following a tense 13-9 win over rivals Sale FC.

An Adam Aigbokhae try and eight points from the boot of Ben Jones proved to be enough for Gareth Davies' side who have now clinched back to back titles in a remarkable rise up the divisions.

Sale, as they have done for a large portion of this season, kept the pressure on Caldy during this contest and did lead 9-7 shortly after the break, but they could not get over the whitewash at a packed out Paton Field.

Jonathan Keep's side knew they had to depart the Wirral with a victory in order to take the title race to the final weekend of the campaign, but despite their best efforts, the National One trophy was lifted by a Caldy side that ended their term on a 17-game winning run.

"Elated, all about the lads," Caldy Director of Rugby Gareth Davies told The National League Rugby Review Show. "They were absolutely brilliant again. Sale were fantastic on the day and caused us loads of problems, but we fixed the problems. I couldn't be any happier! We never thought it would happen. I don't think anyone in the club thought it would happen, but it has!"

"I have had some great teams here at Caldy and I have met some top people over the years, but I wouldn't have rather won it with a different team," added captain JJ Dickinson. "This is my childhood club and to find our way to the Championship with all my mates is just fairytale, isn't it?"

WE ARE CHAMPIONS OF NATIONAL ONE. @Champrugby HERE WE COME. pic.twitter.com/rcEFUI4UDF

Whilst matters at the top of National One were settled on Saturday, the attention nows turns to the bottom where Leeds Tykes have moved out of the relegation zone after defeating Darlington Mowden Park 30-15 on Friday night.

The Yorkshire club have leapfrogged Blackheath and are now two points above the dotted line with a game in hand.

Leeds hit back in the final 15 minutes of the first half to lead 18-8 at the break after Harry Jukes (2) and Jacob Mounsey replied to Ralph Appleby's score.

Matt Burke crossed to seal the Tykes' bonus point and despite Chris McTurk responding for DMP, his opposite number Andrew Lawson touched down on the hour to secure back-to-back victories for Jon Callard's men.

Leeds travel to eighth-placed Taunton Titans this coming Saturday whilst Blackheath are away to Cinderford (5th), who beat Birmingham Moseley 14-10 in Round 29 thanks to a late penalty try.

Despite their loss to the Tykes, Darlington Mowden Park are safe from relegation as are Plymouth Albion who clinched a 54-17 victory over Taunton Titans at Brickfields, with winger Alex Ducker bagging himself a hat-trick. That result in Devon means it has now become a straight shootout for survival between Leeds Tykes and Blackheath.

There was also a trio of tries for Rosslyn Park's Luc Smith as the brother of England and Harlequins star Marcus helped his side to a 46-12 win away at Tonbridge Juddians.

Elsewhere, Cambridge are still hunting down a top three finish after defeating Bishop's Stortford 41-19 at Volac Park and the local bragging rights went to Chinnor as Mark Darlington's try on 79 minutes snatched a 43-40 triumph over Rams RFC.

Hull survived three yellow-cards against neighbours Hull Ionians to secure a 31-29 victory and in doing so, sealed promotion to National One.

Gary Pearce's men had Stephen Johnson and Will Hall in the sin-bin inside the opening quarter as the I's - who also had Alex Campbell yellow-carded - built a 12-7 lead thanks to Ben Stephenson's effort and a penalty try.

However, Hull were able to regather themselves and surge ahead with tries from Ali Thompson, Mike Adlard and Simon Humberstone but this pulsating derby continued to entertain.

Hull Ionians responded with Lewis Minikin, Chris Morton and Josh Thundercliffe all going over as they wiped out the league leaders' 14 point advantage to nudge themselves in front. To add to Hull's problems, they also had Laurence Cowan sin-binned during this period.

The table toppers were now 29-26 down- which still would have been enough for them to clinch the National Two North title - but Hull had other ideas as with the clock in the red, Reece Dean scooted over to send the Ferens Ground into a frenzy as Pearce's boys created history.

"Very emotional," Pearce told The National League Rugby Review Show. "You put a lot into it, the lads have put a lot into it so to also come away with that result in the manner of the game as well just makes it all the more emotional. I did it [gained promotion] with the I's way back so do it with these (Hull) is fantastic."

The race for the silver medal spot is still on as both Rotherham Titans (2nd) and third-placed Sedgley Park collected healthy wins in Round 29. Kieran Curran scored two of the Titans' seven tries during their 41-22 win away at Sheffield Tigers whilst Sedge saw off Huddersfield 35-7 at Lockwood Park, with the hosts having Laurence Sanderson red-carded.

Stourbridge have secured a top four finish in National Two North as Matt Moseley's brace helped the Midlands side come from behind to beat Luctonians 31-24 whilst a late penalty for Chester against Fylde - who had Matt Garrod sent off - saw them rescue a 20-20 draw at Hare Lane.

The National Two South battle for promotion will go to the final weekend of the season after both Esher and Redruth recorded maximums in Round 29.

League leaders Esher overpowered Worthing Raiders to clinch a 39-19 win which keeps them four points clear at the top and in control of the title race.

An early try from Pierre Thompson set the tone for the Eees who raced into a 20-0 lead. The scrum-half went on to add a second whilst No.10 Sam Morley kicked 10 points before the interval.

Fergus Donnelly and Tomasz Pozniak both dotted down in a four minute window to keep Peter Winterbottom's side firmly in the ascendancy and their victory was ultimately wrapped up when Tom James scored Esher's fifth just before the hour.

Another great win in front of a huge crowd for @esherrugby 39-19 @WorthingRFC #Rugby #sportsphotography pic.twitter.com/ppusLJY9Tc

Worthing did rally as Dan Sargent, Jack Forrest and Kemp Price all crossed but it was too little, too late as Esher took another step towards a return to National One.

As for Redruth, they were also in a relentless mood as nine tries - including a hat-trick from Jack Oulton - saw them breeze past Barnstaple. Nigel Hambly's men know they must beat Leicester Lions on the final day of the campaign and hope Esher stumble at Rochford Hundred if they are to stand any chance of gaining promotion to the third tier.

Clifton's title bid has now officially come to an end after the Lavendar and Blacks lost an entertaining Bristol derby 32-31 against Dings Crusaders. Waylon Gasson's late try means Matt Salter's men will conclude a strong term in third place whilst the Crusaders' recent run of eight wins from their last nine games means they are now on the cusp of securing a top half finish.

Also in Round 29, Leicester Lions once again highlighted why they can make life difficult for Redruth this coming weekend as they racked up a 50-23 win away at Hinckley to stretch their purple patch of form to six straight victories whilst Barnes picked up an excellent 34-19 success at Henley Hawks.

Subscribe to The National League Rugby Review Show to look back at all the action from Round 29...