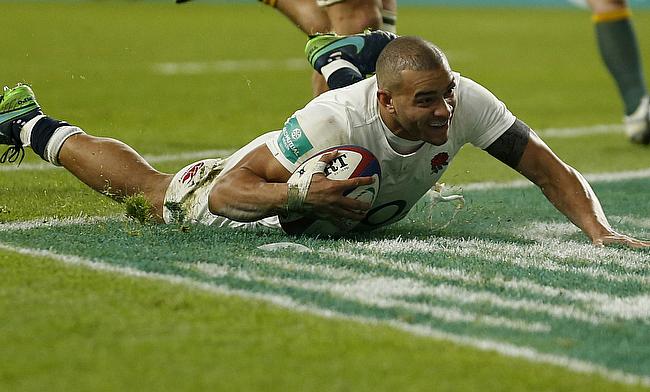 Jonathan Joseph scored a double while Owen Farrell contributed with 15 points as England defeated Australia by 37-21 at Twickenham Stadium on Saturday.

The win has also taken England's winning streak to 14 games levelling with the national record set by Sir Clive Woodward's 2003 World Cup winning team. They have also ended the year without losing a game - something they last achieved in 1992.

It was not an ideal start for Australia as a knock-on from David Pocock denied a try for Tevita Kuridrani after fly-half Bernard Foley missed a penalty.

However, Wallabies made amends when wing Sefanaia Naivalu capitalised on an error from Dylan Hartley to score the first try in the sixth minute and Foley's conversion followed by a penalty took them to a 10-point lead in the first 15 minutes.

Farrell got England going with a couple of penalties. The Saracens' star made full use when Sekope Kepu dropped the ball in the mid-field allowing Joseph to rumble past the line while Farrell's conversion ensured Eddie Jones' men took a three-point lead for the first time in the game.

But, it lasted only five minutes as Foley kicked two penalties taking Wallabies to a 13-16 lead at half-time.

The second half was completely dominated by England with Nathan Hughes gathering a Reece Hodge's long kick sped off but Dane Haylett-Petty halted his momentum.

The 44th minute of the game saw Marland Yarde scoring the second England try in the game when he strolled past the line riding on an offload from Joseph.

Five minutes later, Hughes overhauled Michael Hooper to earn England a penalty following which Ben Youngs sped off breaching Nick Phipps to score the third try in the game and Farrell's conversions on both the occasions meant England took a 11-point lead.

Another penalty from Farrell stretched the lead to 14 points while Wallabies had some respite with a try from Kepu in the 65th minute.

Any chance of a fightback from Wallabies was put off when Joseph made use of a poor pass from Pocock and completed a 16-point win for his team with his second try in the game. This was also England's fourth victory over the Wallabies this year.