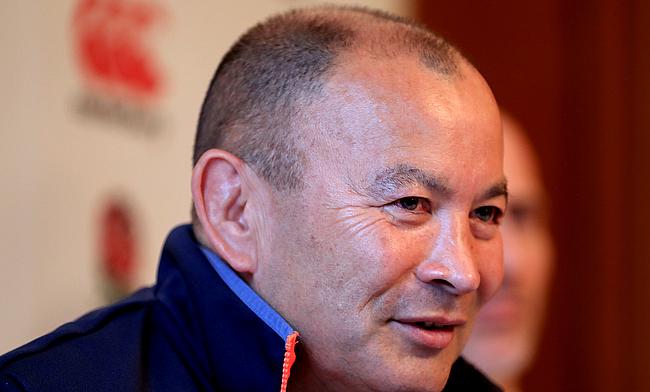 Eddie Jones, pictured, has been engaged in a war of words with Michael Cheika
©PA

England coach Eddie Jones says he is unaffected by the verbal attack from Australian coach Michael Cheika ahead of the upcoming clash at Twickenham on Saturday.

Cheika slammed his former Randwick team-mate Jones for being "vitriolic" against Australia which is his country of birth and further added that the 56-year-old has tarnished his legacy in the country.

Ever since their World Cup 2015 meeting, England have whitewashed the Wallabies earlier this year with a 3-0 series victory and are now on a 13-match winning streak. They will take on Australia on Saturday in a bid to go undefeated this year.

"Cheika's made some comments about legacy, well we don't have anything to do with legacy. It's an uncontrollable part of what happens, so we're not perturbed about that," Jones said.

"It's not for me to decide what my legacy is, it's for other people to decide. So why would I worry about it?

"Do you think I'm the sort of person that worries about people's opinion of me? No? Exactly, then why would I worry about it?

"We'll have a cold beer after the game so he's welcome to join us. I don't control Cheika's emotions."

After their victory over Argentina, Jones made his intention to have a private meeting with referee Jaco Peyper as he was concerned about the illegal scrummaging technique employed by the Wallabies. He also urged the Australian media to treat him and the England team with more respect.

However, Cheika hit back at Jones targeting Leicester Tigers prop Dan Cole, who he believes has been "infringing the law since his career started" and also warned the former Wallabies coach to not try influence or deceive the referee.

"I've got different codes of behaviour. I was always brought up that if you have a private meeting it stays private," Jones said.

"Everyone's got their own standards of behaviour, how they want to behave. It doesn't annoy me.

"I've got nothing to say about Cheika. Every time Australia plays England it's about Dan Cole. He's an experienced campaigner. We would not have any other tight-head in our team.

"I've coached over 100 Tests. I've had meetings with the ref before each of them. It's just normal procedure.

"We just wanted to make sure we were up front and tell the Australians we were having a meeting. On the tour, they whinged and carried on about the fact that they didn't know."

Jones is scheduled to meet Peyper on Friday at 3:30pm along with forwards coach Steve Borthwick. Cheika is yet to decide on whether to attend the meeting or not.