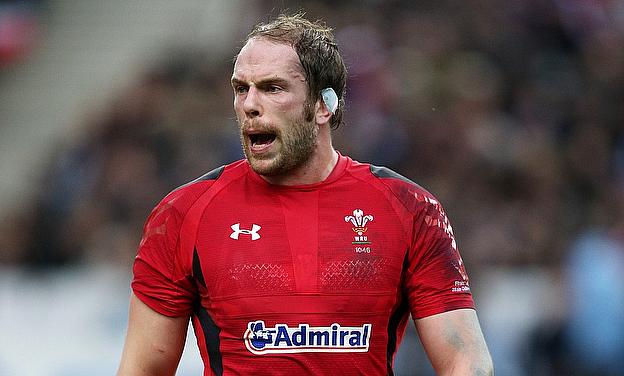 The rival second-row giants, Test team-mates on the last two British and Irish Lions tours, will be pivotal figures in a game that could shape this season's title destiny.

O'Connell, 35, is poised to win his 100th cap at the Millennium Stadium, while 29-year-old Jones will find himself just 12 short of that landmark following an encounter laced with intriguing individual battles.

Both players have hit levels of sustained world-class brilliance during the tournament, highlighting them as arguably the northern hemisphere's top two locks.

Ireland currently lead the race for Six Nations silverware and are two wins away from achieving a first Grand Slam since 2009, but victory for Wales next weekend would keep alive their hopes of landing a third title in four years.

"You associate words like icon and talisman with him," Jones said of O'Connell. "He is the ultimate team player.

"I remember a quote of his a while back that puts the role of a forward, particularly a tight-five forward, into the right perception for anyone - it is a job you do to make other people look good, and he has been doing that for Ireland since he has had the jersey.

"It highlights his drive and determination for the team, which is more than any individual feat.

"I have played alongside him a few times in some pretty big games. He is all for the team.

"He speaks when when he needs to, and what he says is not for the sake of it, but has meaning. He is one of the few guys able to back that up with performances, and he has a CV that speaks for itself."

Jones' performances in this season's Six Nations, especially during away victories over Scotland and France, have helped drag Wales back into a tournament they appeared out of after losing at home against England just four weeks ago.

And the Ospreys forward's fearsome competitive nature is a quality that continues to rub off on his colleagues, whether in the Test match arena or during training.

Speaking this week, Wales flanker Dan Lydiate said: "He (Jones) is relentless at whatever he does. He just keeps going, even when you think he's blown a gasket.

"If we have a training drill, say, 50 yards away, he is always the first one there. He doesn't want to be overtaken.

"That is the kind of character he is, and why he has won so many caps."

Jones added: "It is just fun, isn't it? I try to get a car parking space in the front row so I don't have to walk too far.

"You have to be competitive in the job I am in. I wear my stripes on my sleeve, and I am not afraid to show them.

"In the past, I have probably been misguided at times on the training park, but I am able to harness it now and employ it in the way it counts, which is in the 80 minutes we have at the weekend."

Jones has experienced a fair share of highs and lows in the Wales shirt since making his Test debut almost nine years ago against Argentina in Puerto Madryn. And that competitive streak which runs through him means defeats do not sit easily.

"Show me a good loser and I'll show you a loser," he said. "It is black and white to me, if that makes sense.

"Some losses are harder to take than others. You can lose and play well. It is when you lose and don't do the things you worked on and don't do what you say you would that is difficult.

"If you are beaten by the better side then you can say 'fair dos, it wasn't our day'. It is when you do things wrong that I think the process is sometimes more important than the result."

The challenge for Jones and Wales in seven days' time will be how to halt an Ireland team that has won 10 successive Tests under the direction of their outstanding coach Joe Schmidt.

Ireland have also only lost twice in Cardiff since 1983, which suggests Wales have their work cut out to inflict a rare Six Nations defeat on Schmidt's men since he took charge almost two years ago.

"There are always bits to work on," Jones added. "We are pretty level-headed and will continue to work.

"We know where we need to be, moving forward. We are trying to be level-headed and realistic and continuing to improve."