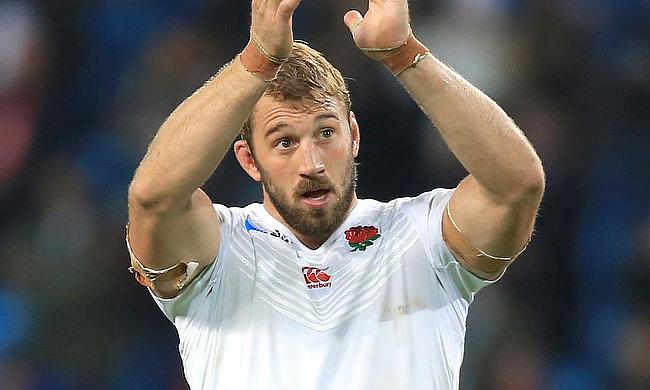 Eddie Jones will hold talks with Chris Robshaw early in his reign as England head coach as he searches for a captain in the image of New Zealand great Richie McCaw to embody the values of his team.

Jones has agreed a four-year contract with the Rugby Football Union which will encompass the next World Cup and begins work on December 1 with Robshaw's future a key early item on the agenda.

Robshaw, tainted by England's disastrous performance at this autumn's global showpiece, could be stripped of the captaincy and will also find his place in the team under threat after Jones commented recently that he is more of a 'six and a half' rather than a genuine openside.

The 29-year-old back row will start with a "clean slate" according to Jones, but the Australian also outlined a clear vision for his skipper.

"The first thing with a captain is that he has to be one of the first players selected," Jones said.

"You've got to know the guy is going to be in the team. Secondly, whatever values we've got in the team such as hard work, they've got to live those values.

"Every time a player looks at the captain they know the values that are important for the team are being shown by him and that he's leading the way.

"Those stories about Richie McCaw are true. In training they go from one drill to the next and he sprints there, he's the first there. He cleans the changing room after the game and that's the sort of guy you want.

"But it's not just one guy, you need a group of players around him to support him.

"I'm sure those players are in England, we just have to find them. Leadership is something you have to develop."

When asked if a sensitive approach was needed with Robshaw, who was heavily criticised for refusing a late shot at goal against Wales that would have secured a crucial draw in September's World Cup showdown at Twickenham, Jones said: "Chris has got a nice café in Winchester.

"Fantastic coffee. Best coffee in England. I might grab him for a coffee down there. Now, that would be sensitive."

Jones has made it clear he will step down upon completion of his contract, insisting the cycle of an international post reaches its natural conclusion after four years.

However, the 55-year-old will first ensure there is an Englishman among his assistants who has been groomed to take over after Japan 2019.

Andy Farrell, Graham Rowntree and Mike Catt - lieutenants of the deposed Stuart Lancaster - remain in place pending talks with Jones, but they appear unlikely to continue, with the new incumbent sure to appoint his own men.

"I will be 59 by the next World Cup and I will be watching cricket in Barbados. That is one of my dreams," Jones said.

"I see international coaching as a four-year project. I have been involved with Australia, South Africa and Japan and I think four years is a good period.

"You can do a lot with players in four years and then it's time for someone else to do it. I see it as part of my job in the four years to develop England coaches to take over.

"Everyone wants to have their own nationalities as a head coach and I understand that.

"But I have a job to take England forward while developing some England coaches. I can do that."

Jones concedes players left demoralised by the failure to advance from the group stage of the World Cup - England's worst tournament performance - will require some lifting.

"Sometimes when you have a competition like that, you lose your love for the game," Jones said.

"One of the first things we have to get back is their love for the game. Players are quite resilient. They'll bounce back."