Jonah Lomu - 'It All Came Down To Willpower & Mental Strength' 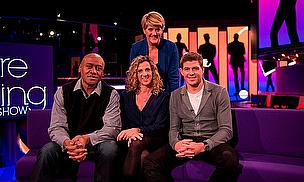 Jonah Lomu – the first true global rugby superstar – powered onto the international rugby stage in 1994 for his first cap in an All Black shirt against France.

The young, but monstrous winger became the youngest All Black test player on the day, at just 19 years and 45 days old. However, unlike what you would expect, Lomu had a difficult start to his international career, with a middling performance in the game as the current World Champions lost twice in a row to the visiting French.

However, with just two caps to his name, Lomu was included in the squad for the 1995 World Cup in South Africa and his career as the most fearsome, dominant world rugby player exploded from that point.

Lomu stunned international rugby audiences (and unsuspecting players) at the 1995 World Cup, when he scored seven tries in five matches, including four in the semi-final against England, where he ran over the top of full-back Mike Catt.

Lomu’s style of play at times defied description as he was labelled a ‘freak’ by Will Carling after the game. Lomu's attacking prowess can be attributed in part to pure power; when near the try line he often ran his 120 kg frame straight into or over any defenders who had the misfortune to get in his way. However, Lomu, unlike many before, managed to combine such incredible strength and power with electric pace, having recorded a time of 10.89 seconds for the 100 metres.

The winger went on the win 63 caps for his country, a grand total of 185 points, and is still the Rugby World Cup’s all-time top try scorer with 15 tries to his name.

For a time Lomu was the biggest name in rugby, and possibly sport, swelling attendances at any match he would feature in. However, disaster struck for the Auckland-born Maori as he was diagnosed with nephrotic syndrome – a serious and chronic kidney illness which could often leave him completely drained and often bedridden for entire days in between games.

After 1995 Lomu’s rugby career went on hold whilst the disorder was treated.

In May 2003, the NZRFU announced that Lomu had been put on dialysis three times a week due to deterioration in his kidney function. Side effects of Lomu's dialysis treatment led to severe nerve damage in his feet and legs; his doctors warned him that he faced life in a wheelchair if a kidney transplant was not performed soon.

At the end of July 2004 it was reported that Lomu had indeed undergone a kidney transplant on Tuesday, 28 July, in Auckland, New Zealand and subsequently, made a comeback to the game.

Still an icon for New Zealand, rugby and sport itself the All Black featured this Saturday on The Claire Balding Show on BT Sport 1 and publically, for one of the first times, opened up about the kidney disorder that threatened to end not just his career, but his life:

He admitted that as far back as the ’95 World Cup “I knew when I went that I had this illness but I didn’t know how it was going to affect me long term.

“I guess the hardest part is that you’re constantly trying to get fit all the time and my problem was that it didn’t matter how hard I worked I couldn’t get any fitter, purely because I was running on empty.

“It all came down to will power and mental strength to try and get through it.”

Through sheer grit and determination, but perhaps lacking judgement, Lomu added that “I told the team doctors not to tell the coaches and that was purely because I wanted to be selected on my own merits.”

Following on from this, Claire, asked Jonah for an insight into the All Black trademark – the Haka – and a few stories from over the year.

Now seeing the funny side, the then devastating winger recalled that “Tony Underwood winked at me. Of all the things you can do, winking is the worst of the lot. It’s purely personal; it’s between you and that person.”

Jonah was then asked about his introduction into rugby and his turbulent childhood.

The New Zealand hero reflected on a challenging and at times disturbing childhood, by lamenting that rugby saved him from a very dark, and bleak side:

“Very much so” Lomu agreed, “I lost an uncle who was decapitated, a cousin who was stabbed to death and I myself, was stabbed twice; but, you know, that’s the area I grew up in.

“Where I grew up that kind of thing came with the territory and you learnt how to fight and learnt how to protect yourself very quickly.

“However, the problem with that was I had all this anger that was built up inside of me and the only place where I found I could release it was on the rugby pitch.”

The road to a professional rugby player, though, was not an easy one, even for Jonah Lomu. The young winger could not afford to train in the gym, so he explained on the show how he improvised with this weighty confession:

“My first lot of weights that I had at home – I couldn’t afford them, so what I did was weld an engine with a steel bar and that was my squat rack!” Jonah told a gasping and amazed audience.

“And then I used cement blocks as my bench press.”

The show highlighted the many struggles that Jonah had to contend with both growing up in New Zealand and fighting against illness, and as a result illustrated the man’s unmistakeable determination and phenomenal desire to succeed.

A great testament to a true rugby legend.