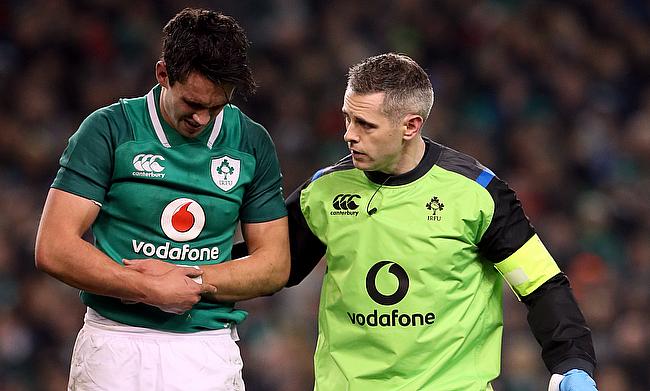 Joey Carbery (left) is recovering from an ankle injury
©PA

The 24-year-old was included in the World Cup squad of Ireland despite suffering the injury in August in the warm-up game against Italy at Aviva Stadium restricting his appearance to just three games in the showpiece event where he was positioned on the bench.

The injury though worsened during the quarter-final defeat against New Zealand and Munster head coach Johann van Graan is expecting Carbery to be out for a considerable amount of time.

"Joey is going to be out for some time," said van Graan. "We've got to make sure he gets his strength back and we get that ankle fully functional.

"From Joey's point of view, obviously, he wants to play but his body is not right. Because of the type of injury he is definitely not going to be back in the next few weeks."

The injury could not have come at a worse time for the Irish province as they would miss him for the opening four rounds of the European Champions Cup but van Graan stressed the need to give the fly-half sufficient time to recover completely from the setback.

"He is very important for the national team, I believe, for the future of Irish rugby," Van Graan told the Irish Times. "I am not the coach but I imagine Andy Farrell will look at him.

"For Munster he is a game winner, that's why we got him and that's why we want him on the pitch but we don't want him to play for a week and get injured again.

"Joey is one of our star players. The 25 out of 25 that he kicked last year showed that when he was on the field he made a big difference to our play. He did some very special things."

Munster currently hold the top place in Conference B with four wins from five games in the ongoing season of Pro14.