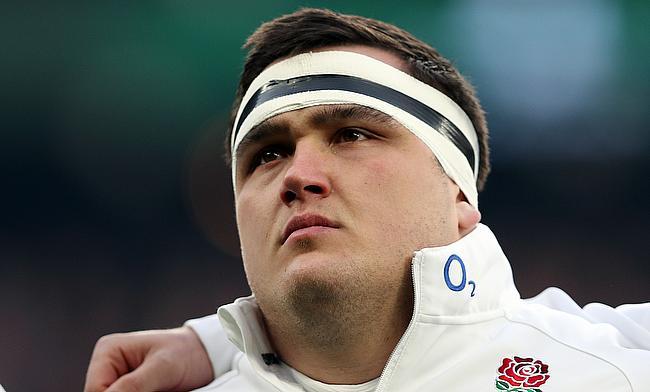 Jamie George fronted up to the media less than 24 hours after England’s 40-24 loss to Wales at the Principality Stadium.

Playing for just over an hour, George made 12 tackles as England failed to build on their win against Italy and provided the vital pass to send Anthony Watson over the try-line and give England fans hope of a positive result.

However, it was Wales who were victorious and took top spot in the Six Nations Championship in the process. For much of the fixture, England largely seemed to be in the game, the major things counting against them being their ill-discipline and two controversial officiating decisions that led to Welsh tries.

What is telling is that even if Josh Adams’ and Liam Williams’ tries were not given, Wales would have won the fixture 26-24. Giving away 14 penalties over the duration of 80 minutes, it was that factor most at the core of England’s loss, with Callum Sheedy’s late penalty goal’s and Cory Hill’s converted try all coming as a result of indiscretions.

In the lead-up to the fixture, the England camp were steadfast in the belief that following the 41-18 victory over Italy, the group had made steps forward ahead of the Welsh challenge. Even up to the day of the test, George maintains that confidence of the side was at its very peak, making the loss all the more perplexing.

“I guess my immediate feelings on the field were that we were at it,” George said. “That was probably the best feeling that I’d had, in terms of looking around at other people and thinking ‘we’re on it’, probably since the World Cup semi-final to be honest.

That was meant to be bottom right @J_George2 ??

Watch episode 1 of O2 Inside Line: The Next Level ??#WearTheRose @O2sports

“The build-up throughout the week had been brilliant, there was just a- I can’t really describe it, other than a general sense of confusion. I thought we actually played some brilliant rugby in parts and once again that word ‘discipline’ is going to pop up again.

“We weren’t good enough in that area and probably penalties that, you’re always going to get penalties in a game, we want to be a confrontational team, so with that sometimes brings penalties, but there were probably avoidable penalties in there, individual errors that did definitely cost us.

“Frustrating, because if we had our time again, it would probably go differently. But, the world of sport, it is not going to happen.”

Wales’ win against England was their first in the last three attempts, with England having bested Wayne Pivac’s side twice in 2020 in both the Six Nations and Autumn Nations Cup. Still finding their feet under new leadership following Warren Gatland’s departure back to New Zealand, in the run-in to the game, Eddie Jones described the Welsh mindset as having changed.

When kicking, like under Gatland, Wales are keeping the ball in play for longer and using that tactic to both tire out their opposition and force errors with relentless chasing of the ball and those not wearing red.

In turn, more space can be found out on the field and as a result, more opportunities for Wales to put points past their opposition and to pick up a positive result. Out on the field it felt that way too for George, when asked by TRU.

Watch the full episode of O2 Inside Line: The Next Level now on YouTube ??#WearTheRose @o2sports

“It seemed that way, yeah,” George said. “They looked a lot more structured, a lot more organised and I think there has been a change in mindset in their forward pack. I thought we clearly had the upper hand at scrum time, but they got the nudge on us a couple of times at maul time, which doesn’t happen to us too often.

“That is certainly something we will certainly be addressing over the coming weeks and we are pretty disappointed with that, but this is about them. They looked very strong there and it is amazing what a couple of wins can do for your confidence and your self-belief and it was an impressive performance by them.”

In the week that has passed since England’s loss, the talking points surrounding the game have been spoken about ad nauseam, but what was noticeable was that the performance from George and his teammates put out on the Principality’s turf was significantly better than in recent months.

Having been part of the England setup regularly since coming into the side in 2016, the hooker has been one of Eddie Jones’ most consistent performers.

Coming off the bench against Italy, he and his Saracens teammates have been playing against a backdrop of debate surrounding their playing time.

Coming into the Six Nations, each of George, Maro Itoje, Owen Farrell, Mako Vunipola and Billy Vunipola hadn’t been playing regular rugby, many of them not having played since the final of the Autumn Nations Cup at the start of December.

The England camp have maintained that this is not a major factor in the team’s recent performances.

Given the manner of the performance against Wales, this didn’t seem to be a major issue, with Billy Vunipola was one of England’s star performers, with George saying that during his time on the pitch, he did not feel as though the game was beyond he and his international colleagues.

“Certainly not when I was on the field,” George said. “But even when looking at it, until they went nine points up with seven minutes to go, I still certainly felt like we were in the game and I was like; ‘right, we are six points behind, we look like we are playing good rugby, we haven’t got our maul firing as well as we usually have, but that usually does come’. So, I could just see it happening.

“So maybe that had an impact, but I wouldn’t have said it was until later in the game. Correct me if I am wrong, but I don’t think that the energy levels seemed to waiver really, and I thought that Wales were very clever in terms of the way that they managed out the game in the lead, tried to kick contestable kicks high up the field and force us to play from deep, so that is always a challenge, but I actually thought it is something we executed very well.”