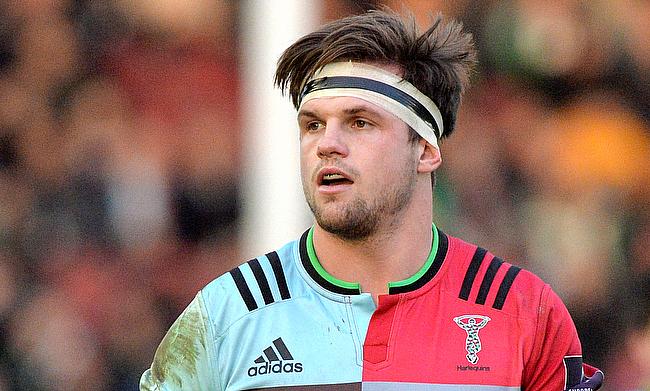 Jack Clifford has been with Harlequins since 2012
©PA

Harlequins have confirmed that Jack Clifford and Gabriel Ibitoye have penned new deals with the Gallagher Premiership club.

England international Clifford has been a product of Harlequins Academy with his senior debut coming during the 2012/13 season and has made 86 appearances for the club since then including 57 games in the Premiership.

The 25-year-old also had loan stints with Ealing Trailfinders and Esher and has become an integral part of the Harlequins set up as they are positioned third in the ongoing season of Gallagher Premiership while also reaching the quarter-finals in the European Challenge Cup.

Clifford is currently involved in England's Six Nations training squad and has played 10 Tests for the red rose team since his debut in February 2016.

“I am delighted to have signed my new contract with Harlequins. Under Gussy and the excellent team of coaches we have been building a winning environment, based on an uncompromising attitude in all that we do," said Clifford to official website of the club after signing a three-year deal.

“It is a really exciting time to be here and I am so pleased to be a part of what I know will be a successful future at Harlequins. We all want to win trophies and we are going to have a lot of fun in our mission to get them.”

Meanwhile, former England Under 20 international Ibitoye made his seniors debut with Harlequins in 2017 and has become a regular member of the matchday squad this season where he made seven appearances scoring two tries.

The 20-year-old, who is also in Eddie Jones' training squad for Six Nations was part of the U20 squad that clinched the 2017 U20 Six Nations and has represented his country in two World Rugby U20 Championship Finals.

“This is my club and The Stoop is my second home so it is brilliant to be signing a new contract and now I am just hungry to start winning things with Harlequins.

“Every day is a new adventure here under Gussy and there is so much energy about in training every day that you feel we are at the start of a journey here – one that can see us win a lot of trophies along the way.

“We have a relentless, winning mentality and everyone is just feeding off each other and having a lot of fun in the process.”