Italy's Seb Negri: 'I do have to pinch myself because it is a dream come true' 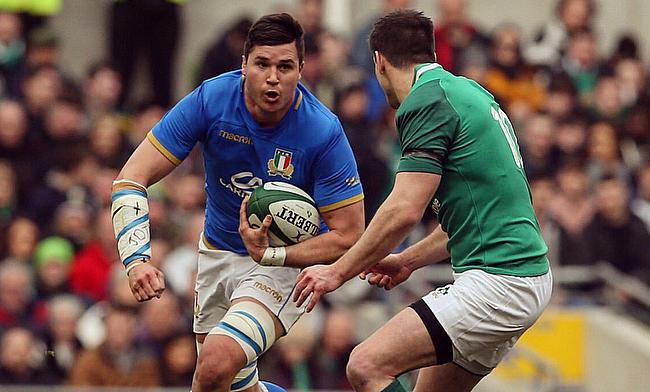 TRU catches up with one of Italy’s standout performers in the Six Nations, a year on from winning silverware with Hartpury

Sebastian Negri ended our previous interview dreaming about the possibility of playing for Italy.

That interview happened last April and Negri had just lifted the BUCS Championship title with Hartpury at Twickenham but since then, a lot has changed in the life of this emerging talent.

It is fair to say the name ‘Sebastian Negri’ has been thrusted into the spotlight this season following his move from National One rugby to Benetton in the Pro 14. “I do have to pinch myself,” he says.

“I think it will probably only hit me once the season is done and then I can reflect."

People may have heard of the Zimbabwe-born flanker because of the immediate impact he has made in Treviso or perhaps because of the well documented incident between himself and Mathieu Bastareaud, but if watchers of the game didn’t know too much about this level-headed 23 year-old, they certainly do now after the recent Six Nations campaign.

Italy once again finished the championships without a victory, but as their wait for a win in the tournament goes on, Negri was one of the major positives for Conor O’Shea as he impressed in his five consecutive appearances for the Azzurri, picking up the second highest amount of carries during the tournament.

On the day we speak, Negri has just arrived back in the UK. Last Saturday afternoon, he once again put in another classy display for his country as Italy so nearly beat Scotland in Rome.

“There has been a lot of disappointment in terms of the results, but I think everyone can see that we are moving in the right direction under Conor,” Negri tells TRU. “I think we showed people what we could do against Scotland and I guess it was quite frustrating that we only managed to do that in the last game.

“I do have to pinch myself because it is a dream come true to have been involved in the championships and on a personal note; I’m really pleased with how things went. Of course, I still keep my feet on the ground because I want to keep learning and improving so hopefully this is just the start of something really good.”

Negri seems to be taking everything in his stride in what is proving to be a breakthrough year for him. An instant move after university to the north-east of Italy was never going to be straightforward, but the talented back-rower has rapidly adapted to his new surroundings. “It has been a massive step in terms of physicality and the mental side too,” he adds. “But, it is a step that I am really enjoying. The journey across to Italy was not easy at the start, but I have got a great team at Benetton and they helped me fit in.”

His move to the Pro 14 was also encouraged by O’Shea and even during Negri’s time at university, the Irishman saw his potential. “Conor has been incredible,” Negri says. “He kept in touch with me when I was at Hartpury and helped me when I arrived at Benetton too. For youngsters who want to go far, there is no one better to work under than Conor himself.”

Negri also mentions his former Hartpury teammate and now fellow Italy international Jake Polledri who made his debut against Scotland last Saturday, adding that he was “chuffed” and it was a “special moment” to play alongside his friend. Negri with the likes of Polledri and Matteo Minozzi represent encouraging signs for O’Shea and Italy, despite another campaign which ended with the wooden spoon.

For these aforementioned players, this was a chance they took with both hands and in Negri’s case, high praise came his way.

“It was all very surreal,” he says. “Last year when I was at Hartpury, I was watching some of the top players I played against on TV in the Six Nations. Suddenly, I am in the mix to play against them. It was something very, very special and I will never forget it for sure.

“Receiving that praise is another pinch yourself moment! The feedback has been fantastic and the attention that I have been getting has been great, but like anything in life and in sport in particular, you know there are ups and downs so it is important to enjoy the good times because there will be times where you have to dig deep and pick yourself up. I am enjoying the experience, but I want to keep getting better.”

Negri’s desire to improve stems from his time at Hartpury and the club is something he speaks highly of. He is keen to stress how much he owes to the system which is in place in Gloucester and he insists more players can use this particular pathway to forge a career in the game.

XV - Here is @OptaJonny's 2018 Six Nations Team of the Tournament, based on our unique Index system which awards players points for all their actions in a game. Selection. pic.twitter.com/3VVIrff9yR

Negri is one of many players to have made the transistion from university into the professional game and his rise over the last 12 months has been astonishing. After making his international dream become a reality, he is now hungry for more.

He adds: “The Six Nations was wonderful to be a part of, but it is about recovering before heading back to Benetton to finish the season really strongly.

“After that, hopefully I can be involved with the summer tour to Japan with Italy but like I keep saying, I just have to dust myself off and focus on what lies ahead because I know there is a lot of hard work to come."