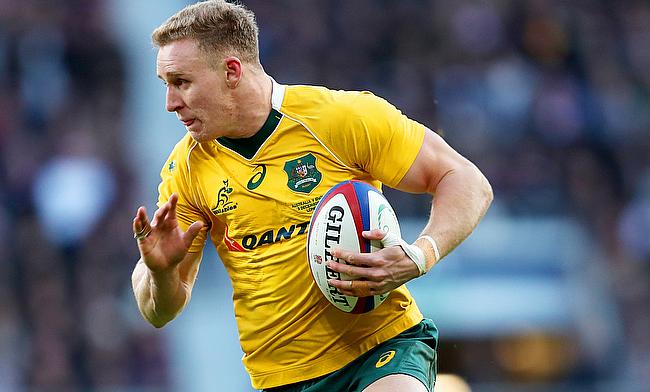 Australia came up with an impressive performance at Optus Stadium as they defeated New Zealand 47-26 in their Bledisloe Cup opener on Saturday.

The All Blacks suffered a major setback as they played the entire second half with just 14-men after Scott Barrett was red-carded - which was also their fourth sent-off ever in the history of the game.

The result also meant the All Blacks lost their number one rank in the World Rugby Rankings for the first time over a decade and raises questions over their preparations leading to the World Cup with a draw and a defeat in their last two games of the Rugby Championship.

Christian Lealiifano kicked a seventh minute penalty to begin the proceedings following which James O’Connor on his first start in six years played a pivotal role in sending Reece Hodge over the line in the 10th minute.

Jack Goodhue helped the All Blacks stage a comeback creating a space setting up Anton Lienert-Brown over the line in the 13th minute and Richie Mo'unga followed with the conversion. The All Blacks soon claimed the lead with their second try from Rieko Ioane to make the scoreline 10-12.

Just around the half-hour mark, Australia reclaimed the lead with a second penalty kick from Leali'ifano that made the scoreline 13-10 and it soon became 16-10 when the fly-half kicked another three-pointer at the stroke of half-time that came following a red-card to Scott, who was adjudged of a shoulder charge on the head and neck of Michael Hooper.

The second half resumed with a scoreline of 16-12 and Australia drew first blood with back to back tries from Lukhan Salakaia-Loto (46') and Nic White (48') to take their lead to 14 points. Beauden with a touchdown in the 54th minute cut the gap down to seven points but Wallabies' took control of the game with further touchdowns from Marika Koroibete and Hodge.

The final 10 minutes saw Ngani Laumape and Kurtley Beale trade tries as Michael Cheika's men completed a 47-26 win. The win has taken Australia to the top position in the table and could go on to win the Rugby Championship if the Springboks lose their final game to Argentina.