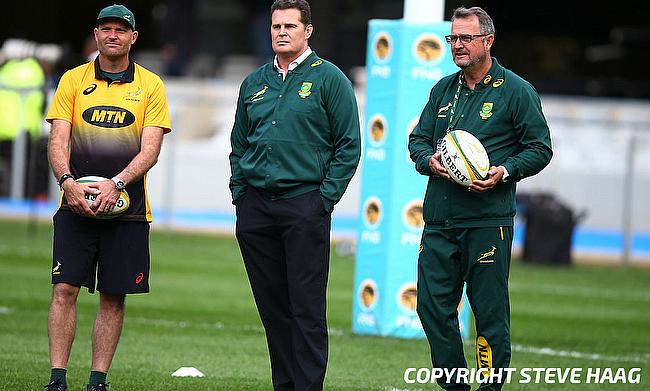 South Africa director of rugby Rassie Erasmus said he was relieved to manage a draw against New Zealand in Wellington during the second round of the Rugby Championship.

The Boks looked in trouble by the 75th minute when the All Blacks had a 16-9 lead but replacement Herschel Jantjies once again showed brilliance with a last-gasp try in the final minute and Handre Pollard kicked a nerveless conversion to level the scores 16-16.

The result also means the Springboks hold the top position in the Rugby Championship table with seven points - one more than All Blacks - and will be fancying to clinch the tournament when they face Argentina in the final round on 10th August.

“To play the number one team in the world and be lucky at the end there, it was almost like last year,” he told.

“To come away with a draw, I guess we’re satisfied with that. The first 35 minutes we played very well while they totally dominated the second half. So fairly lucky, in a big way.”

The Boks started the game with a brisk couple of penalties before Jack Goodhue's try gave Steve Hansen's men a slender one point lead heading into the break and Erasmus was proud of how the team competed against the World Champions.

“We certainly take a lot of positives out of this because they are the world’s number one team, they’re the benchmark and we all strive to be where they are,” he continued.

“I was frustrated in a sense that we dominated a lot of things except line-outs. All the other facets we dominated.

"Especially when they were almost under caution from the referee for repeated infringing and we missed the penalty when we could have gone nine points up, then they scored that turnover try and that swung the momentum.

“Lucky to escape, but the first 40 minutes we played really good tactical rugby.”

Jason Leonard Exclusive: “I would be a very lucky man if I had a crystal ball and I could see what might happen