'I thought that if I didn’t take the opportunity, I was probably going to regret it' - Turner 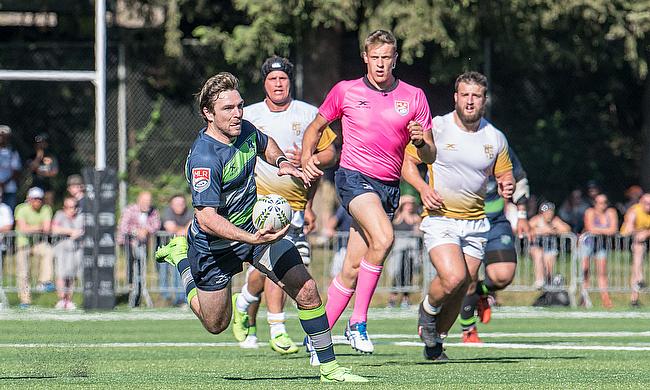 SaberCats aiming for more consistency ahead of MLR season
Three MLR players that now play in the UK
'I wanted to get back into the sport I love' - Austin Elite's Zinzan Elan-Puttick on life in the MLR
John Moonlight: 'Guys are going to realise that it takes a lot to be a professional.'

Mat Turner says he would have regretted not moving to America to continue his rugby career if he had passed up the chance to join current Major League Rugby champions Seattle Seawolves.

“I always had an idea in my head that I’d move to America and give it a go. I never thought it would be rugby,” said Seattle Seawolves fullback Mat Turner. “I had really wanted an opportunity to give back to the sport and I looked for a position where I can help build the team.”

South African-born Turner played for England Sevens, plying his trade on the Sevens Series circuit for six seasons and scoring 92 tries in that time. Turner was one of the most recognisable names in sevens rugby and it was at the end of his career in the shorter format of the game that Turner began to develop a relationship with Seattle-based rugby company Atavus.

“In 2013, I got asked to come and play for a sevens team, well for a company called Atavus,” said Turner. “Quite a few of the ex-USA Sevens players who were based in Seattle all played for them throughout the summer. The year before last, I came out in the summer to play National Club Sevens for the same team (Atavus) and the owner, Chris Prentice, introduced me to the majority owners of the Seawolves, Adrian Balfour and Shane Skinner.

“I got on really well with Adrian and Shane and they were like, ‘We’d love you to come play for the team’. Knowing the salary cap and the cost of living in Seattle, I couldn’t just come as a player. They said they were looking for a Director of Operations, so all the stars aligned.”

Former @englandrugby 7s player punished many last season with his strong counter attacks and speed in the fullback position. You can find Turner in the Seawolves’ back field making try-saving tackles and fielding kicks this upcoming @USMLR season! pic.twitter.com/3V2CgDx0FL

“I thought that if I didn’t take the opportunity, I was probably going to regret it. Within four months I had my visa approved and walked out of Seattle airport, into the freezing cold, and this is now home.”

Things didn’t get off to the best of starts on the field. Tony Healy was due to be the head coach of the Seawolves, but due to a visa issue, the Canadian was dismissed before the season started, meaning player/coach Phil Mack took the lead in Seattle.

“He, obviously, had to have all the awkward conversations with all the players, but he accepted it and just got on with the job, and he did an outstanding job,” added Turner. “Phil’s a great guy, he’s captain of his country and through the highs and lows he’s stuck around and not jumped ship.”

“I’m sure that he could have gone overseas throughout his career, but he’s always wanted to give back to Rugby Canada. He’s really focussed on growing the game in Canada and that passion translated to us and helped guide us to the Championship.”

Seattle won the inaugural MLR Championship, beating the highly favoured Glendale Raptors in San Diego. It was the Raptors who had subjected Seattle to their two losses in the regular season, meaning that the Championship win was savoured so much more.

“We were the underdogs,” Turner told TRU. “In the media, everything was against us, but we were quietly confident through the whole season. We’ve got guys like Phil, whose played plenty of internationals, we’ve got loads of past Eagles, guys that have played at a higher level and have been in pressure situations before.

“Throughout the season, we got to play Glendale twice, to see what they really had, and then just changed it up for the final. They didn’t have a plan B, so that worked in our favour.”

Great to be a part of this squad #togetherwehunt https://t.co/O4QiYnhRsZ

With the Toronto Arrows and Rugby United New York joining the fray this season, Turner sees the inclusion of MLR’s first East Coast sides as extremely beneficial for both the league and Canada Rugby.

“Why would you not want a team in New York?” he said. “It’s one of the biggest media markets in the world. Bringing in a Canadian team, it’s a bit of a no brainer. You’re tapping into a completely new pool of players. Last year Canadian players were seen as foreigners, this year they’re not, because there is a Canadian team.

“Now you are creating opportunities for not only one country, but two countries. Everyone see’s it as a USA league, but it’s an American league. I wouldn’t be surprised if one day there is a team from Mexico.”

Like many, Turner was impressed by the quality of the league, especially with it being the first year in 2018: “The standard was decent. Not bad for year one. What’s going to keep the league going is if teams keep playing attractive rugby.

“We’re lucky up in Seattle, if you start a team up, everyone is immediately a fan. We sold out all of our home games last year and we’ve done the same this year. As players, it’s our job to set the standard higher than it was last year.

“I’m a big believer that you have to nail down your lineouts and your scrums, because everyone has athletes in the backs. If you can’t win your own scrums or lineouts, you’re pretty screwed in this league.

“The biggest growth from last year to this year, is the technical side of things. For example, guys like Joe Pietersen who has played loads of Super Rugby, he’ll be educating guys week-in week-out. That’s the great thing about having these big names come. Fodes (Ben Foden) for New York, guys are going to gain so much knowledge from him.”

The Seattle Seawolves kick-off their MLR season at the Starfire Sports Complex on Sunday in a repeat of the 2018 MLR Championship game.