SaberCats aiming for more consistency ahead of MLR season 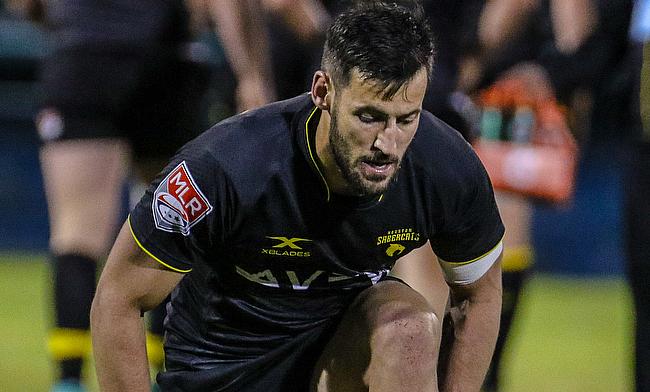 “Hopefully they can anticipate a couple more wins. I’d like more than a couple, but let’s start with two wins, and then we’ll be back to winning ways, said Houston SaberCats flyhalf and backs coach Sam Windsor.

“We’ve got some insane attackers with ball in hand and for this year, we’ve added some grunt and size up front to get us on the front foot, winning the ball back from lineouts and the scrum. We’ll be just as enterprising as we were last year, but hopefully a little bit more consistent and definitely get a few more wins.”

The Houston SaberCats ended MLR’s maiden season at the foot of the table, picking up a solitary win throughout the campaign. Coached by former Ulster and Ireland prop Justin Fitzpatrick, Houston drew a lot of attention going into the league season.

Signing players who had a range of experience, Windsor admits that some of the players underestimated the transition to American rugby: “It took the season for them to fully realise that this is a professional league and just because you played in the Premiership, Championship or Pro 14, it doesn’t mean you’re going to be killing it over here in the leagues.

“Hopefully we’ve got over that hump and realise that we need to be professional and need to put in the work if we want to win. A lot of teams are doing that, and we came up short on seven of our eight games.”

#MondayMotivation has us looking back at our exhibition matches to see where we can improve. This Saturday is the start of the #MLR regular season. We start the season on the road facing @austineliterugby Jan 26, 7PM CT at Dell Diamond Stadium in Round Rock, TX. Watch on @KUBE57 pic.twitter.com/9jOGkKICpT

Windsor moved to Houston after spending time at the Seattle Saracens with Justin Fitzpatrick and began work with the SaberCats when there were just two desks in an office space. The flyhalf would go on to find himself doing some tasks that he would have scarcely imagined.

He added: “I liaise with our immigration lawyers and attorneys when we’re trying to bring players in. Gathering information for boys to process is a daily chore for me. Matt Trouville [Flanker] and I were solely responsible for all our playing kit and our design.”

Taking on the role of backs coach upon joining Houston, Windsor hadn’t considered coaching until moving to Seattle: “Having been through a few professional setups and getting to experience different styles of coaching, I have an idea about how I want it to be. I’m still learning and still finding my feet, but I’m learning weekly about the do’s and don’ts with how people react to different stimulus.”

Despite their low finish, the SaberCats still caught the eye across the Atlantic. One of their stand-out performers, Paul Mullen, was picked up by the Newcastle Falcons on a short-term contract at the start of their season and Windsor says that the club encourage their players that Mullen won’t be an isolated case.

“We tell all the boys pushing for further honours, that just because they’ve made the SaberCats, that doesn’t mean it’s the end of their professional career. If we can put them back on the professional stage and get them back over to Europe, that works for us. There are definitely other guys in the squad, and the league, that I believe can play over the pond.”

MLR’s maiden season was a success for Windsor too. The Australian finished at the head of the points scoring charts, meaning he will be the leagues top points scorer when the new season kicks off. Windsor says that the tag provides good motivation for him.

“I’m not by any means the youngest in the league, but if I’m contributing at a high level with points, then I’ll continue playing the game. A goal for me this year is to be in that same spot come seasons end, so plenty of work and practice to keep my focus and drive going.”

Impressed by the first season of MLR, Windsor is hopeful that the league continues to grow at a steady pace, not getting ahead of itself. He said: “It’s being run by some smart people, all the teams are on the ball and I think it’s in good hands on the business side of things.”

“It’s just getting more people exposed to it because not a lot of people have seen rugby and don’t understand it. Then, once they come out to watch it, they fall in love pretty quickly. The second year is going to be a telling year, where we’ll get an idea whether it will continue to grow, plateau for a couple of years before the money increases and the teams increase.”

Houston start their MLR campaign against Austin this Saturday at 7pm (ET) and play their first home game on 22nd February against the Toronto Arrows.