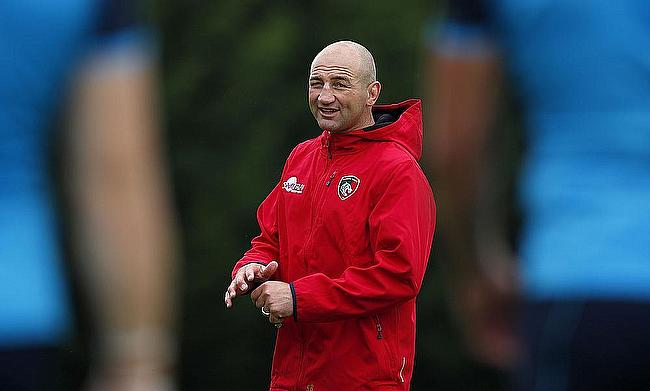 In just under two years, Steve Borthwick has guided Leicester to a Premiership final
©Leicester Tigers

Theo McFarland Exclusive: 'I never in a million years thought I would end up here'
'Dear Leicester Tigers, make us proud one more time...'
George Ford inspires Leicester to 27-14 win over Northampton in semi-final
Ben Earl hat-trick guides Saracens to Premiership final as they defeat Harlequins 34-17

This is a club where the flow of silverware looked like it would never dry up.

When Geordan Murphy lifted the Premiership trophy against a backdrop of champagne in 2013, not many people would have envisaged the journey Leicester Tigers have been on since then.

Twickenham was effectively 'Welford Road South' as the East Midlands outfit reached nine successive finals, winning four of them, as they flexed their muscles to become the best in the land.

The Tigers were a great side full of great players but after nearly a decade without a trip to England HQ to compete for the big prize, Leicester are back where they - and many others - feel they belong.

In the past, they seemed ready-made for success, an elite team who had a steely focus on conquering the country and Europe too. They were a well-oiled machine, but for the majority of this latest crop of Tigers stars, they have had to be delicately slotted into place by Steve Borthwick in order to guide the side back to the summit.

"They look like a Tigers family and we’ve missed seeing that."

Ahead of the #GallagherPremFinal on Saturday, TRU journalist and Leicester supporter @_ElizabethC99_ talks us through her emotions and explains what the Tigers mean to her.https://t.co/40nsOLOZXq pic.twitter.com/UnmgYwtIy4

Since Leicester last graced Twickenham’s hallowed turf for a domestic final, Northampton and Harlequins have both added a Premiership trophy to their honours boards whilst Saracens and Exeter Chiefs registered multiple titles.

As for the Tigers, they fell away from being regular contenders to fighting the fire of relegation and if it wasn’t for a vital victory over Newcastle Falcons in 2018 and Sarries’ salary cap misdemeanours a season later, this famous old club would have been consigned to second tier rugby.

The decline on the pitch was merely scratching the surface. With a fractured boardroom combined with the impact of Covid-19 and wage cuts which saw many of their leading players depart the club, Borthwick arrived at Mattioli Woods Welford Road with his inbox piled high.

With the Premiership pausing due to the pandemic, the new head coach was able to evaluate his squad on the resumption of the campaign in August 2020.

The Tigers ended up finishing 11th after losing seven of their final nine games with Leicester legend Austin Healey telling TRU he wasn’t sure whether ‘Borthers was the right man for the job.’

With no risk of relegation, it was noticeable the Tigers head coach took the step to give youth a chance whilst also bringing in his own players and shaping his own coaching staff.

Many may look at the progress Leicester made last year – reaching their first European final since 2009 – as a foundation which the club have built this season’s remarkable campaign on, but arguably the blooding of emerging talent and the introduction of fresh faces around the Covid-disrupted season was where the green shoots of recovery began.

"I came into a new group, a new team, they didn't know me a huge amount, and I was trying to learn about them quickly,” Borthwick says. “To see that then, I thought we have potential for a foundation."

“When Steve came in, there was an immediate change in the atmosphere and belief that we were going to get Tigers competing back at the top of the table,” adds Freddie Steward, one of Borthwick’s standout performers.

“Steve was very clear that that was his aim and I think when a coach is very black and white with something like that, it really fills the boys with belief and there is a real belief that we can have the club back where it belongs.”

Steward is part of a cluster of current Leicester players who have graduated from a successful academy side that won the National Under-18 League title without losing a game in consecutive seasons in 2017/18 and 2018/19.

The England full-back has risen through the ranks alongside Jack van Poortvliet, George Martin and James Whitcombe to name but a few and the mixture of homegrown talent with shrewd recruitment – as well as Borthwick enforcing his vision – have been the ingredients the Tigers head coach has managed superbly.

Yesterday marked 17 games without a card for #LeicesterTigers no8 Jasper Wiese, after 3 yellows in 10 games to start 21/22. His disciplinary turnaround has been remarkable. Even off a long run in 77th minute, the South African got his technique spot on. #LEIvNOR pic.twitter.com/2nUVFDRxNr

“When you have bonds like that, with people who you have known and played with for years, it just makes it extra special,” Steward continues. “It is just being part of the environment we have developed here at Leicester with Steve and it is one where the boys are really close and like I say when you’re close off the field, it brings that special bond on a Saturday when you are going to the well together.”

Steward also references the professionalism and the role model persona exhibited by Borthwick - as well as defence coach Kevin Sinfield - as a key reason why the environment is how it is. The Leicester boss, himself, has constantly credited his backroom team for the rapid improvement over the last two years and his No.15 is not the only one more than willing to heap praise on the coaching group.

Whilst Steward et al were entering the first team from within, the likes of Jasper Wiese were added to the squad in the short window leading up to the 2020-21 campaign. The South African back-rower arrived in the Midlands without any fanfare, but his debut season in the Green, Red and White burst him into the wider consciousness.

“I wasn’t here through the darker times a few years back, but it is fairly easy to come into an environment where all the boys sort of pull you in and accept you,” Wiese adds. “It is a great environment to be a part of and that comes from the coaches and the players as well.

The Springbok’s general performances were eye-catching, but his lack of discipline was frequently stifling his progress and at times, putting a Leicester team who were on an upward curve on the back foot.

However, with the guidance and intelligence of Borthwick and his fellow coaches, Wiese’s card count has decreased and his thunderous displays are becoming more notable for all the right reasons.

“It's hats off to all the coaches working with me; Steve [Borthwick] and Aled [Walters] hammering it on me every week, Kev [Sinfield] as well,” says Wiese. “Your tackle height and your clean-out height, use your arms, wrap.

"So I think when you continue doing that, and hearing it a lot, then it's brilliant, because then when you're under fatigue you sort of remain alert on what you have to do. Again, I can't take any credit for that, because it's all the people around me working and helping me with that every week.”

Wiese has become one of Borthwick’s main operators with the likes of Julian Montoya, Harry Potter, Guy Porter, Dan Kelly and Matias Moroni – who all joined Leicester around the same period as the South African – proving their worth to the club after the quintet started last week’s semi-final victory over Northampton Saints.

What Borthwick has done since day one is put his stamp on things and from top to bottom, everyone involved with Leicester has obliged. From boardroom level to the fans in the stands at Mattioli Woods Welford Road, his directness and methodical thinking has helped transform the Tigers from a sleeping giant to a club hungry for success once more.

Ellis Genge and George Ford have carried out Borthwick’s vision to a tee this year and have led by example, and now both have a chance to end their Leicester careers by lifting the Premiership title if they can overcome Saracens on Saturday.

And for guys like Steward and Wiese who have been integral cogs in the revamped Leicester machine, to taste success at Twickenham would complete the remarkable journey the club has endured.

The Leicester Tigers 2??3?? to face @Saracens in the Gallagher Premiership Final at Twickenham. #LEIvSAR ?? #COYT ?? pic.twitter.com/nwAomSUVf7

“The journey the club has been on in the last couple of years through the Covid period and not being where we want to be, to then be here in a Premiership final in such a short space of time is testament to the coaches, the supporters, the players,” Steward says.

“Everyone has been working incredibly hard at this club over the last couple of years to turn it around so to have an opportunity to lift the Premiership trophy on Saturday and after all those years of hard work of getting Tigers back up to competing at the top, it will definitely make it special.”

“When we grew up, I definitely heard about Leicester and Sarries when they were winning a bit from 2012/13/14,” Wiese adds. “You heard about the legacy that Leicester had in the Prem as well and what a great club it has been with its traditions.

“It is amazing to see how far we have come in a short amount of time and I think every weekend is special, but this one is a bit more special.”

“You know that it is a big occasion and it is maybe an opportunity for us to show how far we have come as well but not just saying ‘ok we have played in a final’ but to actually go and hopefully win it. I think the hard work has been done and I have 100 per cent belief in the team and everybody here. I think it is a matter of how we approach it and how hard we play on Saturday. If we play hard enough, the result speaks for itself.”

Freddie Steward and Jasper Wiese may also have an eye on next year’s World Cup but are you ready to hear the stadium roar at Rugby World Cup France 2023? STH UK can help you book your ultimate Rugby experience, as the exclusive Official Hospitality Sales Agent for Great Britain – and therefore the only place for fans from England, Scotland and Wales to purchase their ticket-inclusive hospitality packages officially.