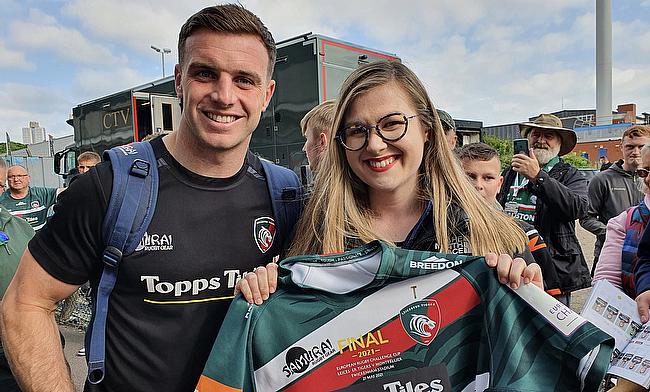 It’s taken nine years, but Leicester Tigers are one game away from being crowned Champions of England.

Since Steve Borthwick joined the coaching staff back in February 2020, the club have been on an upward trajectory and have continued to impress both pundits and fans across the rugby world.

It’s been some turnaround for the 10x Premiership champions. The last two years have been pretty special. Reaching a Challenge Cup final last term and finishing sixth in the league was seen as a huge achievement, particularly as Leicester were on the brink of relegation the season before last. Steve really has transformed the team.

I’ve supported Leicester since 2012 and it’s been a rollercoaster, but I wouldn’t have it any other way. Defeats hurt, of course they do but they also make you resilient and make you take pride in supporting such a prestigious club like the Tigers.

Ellis Genge was interviewed last week and said he has “taken pride in the whole process” of rebuilding the club. He then went on to say: "That's why this team has got to where it is now. If you don't have any pride when you are 11th [in the table] then we wouldn't have got to where we are now because we wouldn't have cared." I really love his honesty and can relate as a fan. I’ve supported them through the good and bad times and have never turned my back on them.

They will be disappointed not to be in action this weekend, but amid the cancellations, are Leicester Tigers beginning to turn a corner following three straight wins?

TRU's @_ElizabethC99_ explains why that might be the case...

When Leicester missed out on the play-offs for the first time in 14 years in 2018, that hurt a lot. I couldn’t believe it and I was so gutted because we are such a prestigious club. It was made even worse from the gloating that came from my Mum, Dad and Brother who support their local rivals, Northampton Saints!

I’ve watched rugby since I was six years old and, believe it or not, grew up supporting Northampton - it was only when I watched an England game that Toby Flood played in, that I changed my allegiance and I’ve never looked back.

There were some pretty horrific defeats that Leicester endured that season, however - the two that stick in my mind are the derby day defeat (Saints beat us 29-15 in our own backyard) and Exeter hammered us 52-20 at home. I remember standing on the terrace with my Dad when Northampton beat us and it really wasn't a great day to be a Tigers fan…

Fast forward four years, though, and look how far Leicester have come. Steve has been influential in how the team has performed in recent months. Making Genge captain back was a brilliant idea and it also took the weight off Tom Youngs’s shoulders too.

Ellis has become a real leader in the team, as has George Ford. They lead from the front and are what Leicester pride themselves on. Furthermore, the way Steve has embedded young players into this newly formed Tigers team is fantastic. Joe Heyes, Tommy Reffell and Freddie Steward to name a few have been outstanding.

Was Eddie Jones' team selection against Italy too loyal?

With the Six Nations taking a break, is it an opportunity for the England head coach to now broaden his horizons?@_ElizabethC99_ picks her six players who have caught the eye in the Premiership.https://t.co/VF55vlgPKV pic.twitter.com/jE5yegVZDk

They look like senior players who have been in the squad for years and have richly deserved their international call-ups in recent months. I think what makes me so excited about the squad is that they are primarily a young team.

Just think what they could look like in five years time - Steve is building something incredibly special, this is just the start. They play with smiles on their faces and are a tight-knit group - they look like a “Tigers family”. We’ve missed seeing that in recent seasons.

Personally, this season has filled me with so much joy. I've loved being able to watch Leicester play at Mattioli Woods Welford Road and celebrate their victories with fans again in the stadium - I've truly missed watching live rugby.

To have won all of our home games is an achievement in itself! It would be a dream come true to see us lift that trophy on Saturday- everybody at Leicester has worked so hard. We owe it to Tom, Maisie and his late wife Tiffany too.

The club have been resilient all season, remained top of the league in what's been the toughest competition yet and never given up. Other seasons we may have crumbled because we couldn’t cope with the intensity of the league. We’ve encountered some tough games and won them at the death which is what I’ve loved seeing this Leicester team do - grinding out wins when it matters most.

My favourite game this season to watch was the derby at Franklin's Gardens last October. We thrashed Saints! Leicester played some absolutely beautiful rugby, the sun was shining and we beat our biggest rivals away from home! It'll be a day that lives long in my memory. 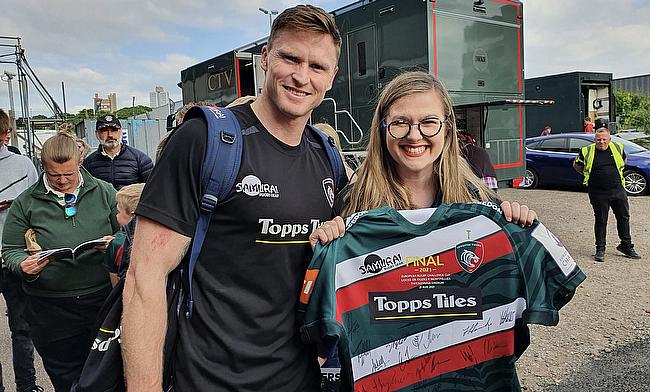 I've also always believed that Leicester are a family club but even more so since I lost my best friend to Bowel Cancer last year.

The Leicester Tigers kit manager, Jamie Doig, donated a signed shirt for me to auction off in aid of Bowel Research and I'll be forever grateful to him and the squad for their generous gift. At the last home game this season, the players took time to have photos with me and the shirt. They were so supportive of my fundraising efforts - it makes me emotional thinking about it.

Unfortunately, I couldn't make last weekend's semi-final as I was seeing Ed Sheeran in Manchester but I followed the game closely on BT Sport and I was in tears when the final whistle blew. It was such a tough encounter but the squad showed resilience and fight to beat our nearest and dearest - I still can't believe it. I'll be there on Saturday and I can't wait to be cheering on the team from Block L14! Bring it on…

Elizabeth is raising money for Bowel Research UK so if you can support her in any way, that would be hugely appreciated. Click HERE to donate.