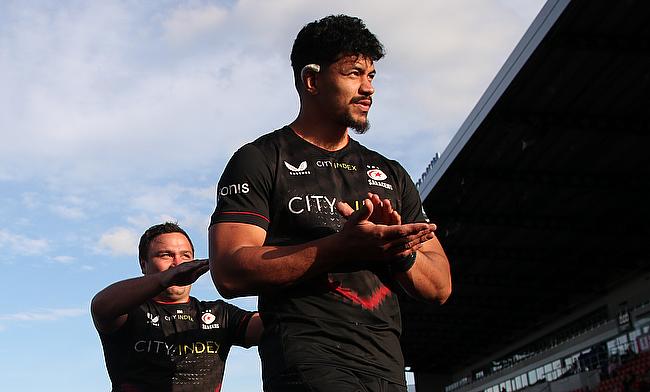 Just days before playing Leicester Tigers in the Gallagher Premiership final at Twickenham, Theo McFarland is relaxed ahead of the biggest game of his career so far.

In his debut campaign with Mark McCall’s Saracens, the 26-year-old back-row forward has excelled in North London, playing in 26 games, and scoring six tries across all competitions. A relative unknown coming into 2021/22, his breakout season has seen him go from a rotational player to starting seven of his last nine games for the club.

Set to play in a first major final this weekend, McFarland is still taken aback by his rise from being a basketball international to a Premiership regular.

“It has been quite a journey for me,” McFarland said. “I never in a million years thought I would end up here in the Premiership, playing for Saracens.

“I am just grateful to be here, playing alongside these greats. They have been a great help. When I got here, the lads just took me in and helped me improve my game. It has been great for me.

“At Saracens, it is all about focusing on ourselves and what we do. It is always about us and how we can help each other and improve. These guys, the past two or three years, have been through a lot.

“I know it is my first season, but I could feel coming into Saracens, as we train week in, week out, all the effort the boys put in, we are just really looking forward to the final this week, but at the same time, we have got to enjoy it.”

If you look at McFarland’s career on paper, it is a story filled with plenty of twists and turns, as well as highs and lows. His first sport was basketball, the 6'6" forward picking up rugby a little later on in his life. He played at Pesega Church College and Moamoa Rugby Club in Samoa before heading to Australia.

Switching between rugby and basketball, as well as working as a loan recoveries officer, it was when representing his country at the 2019 Pacific Games that rugby finally took a hold of the 26-year-old’s career thanks to a Samoan legend’s intervention.

“I was on the edge of quitting rugby and basketball,” McFarland said. “Brian Lima approached me while I was playing basketball for Samoa, I think it was against Tonga, and after the game, he told me to come back to rugby for Manuma Samoa [in Global Rapid Rugby].

“He brought me back into rugby. I was in Japan for a bit, trialled for Panasonic [Wild Knights], I didn’t make the team and then after that, I felt like rugby wasn’t my thing.”

His time playing for the Samoan franchise in the 2020 edition of Global Rapid Rugby was short-lived due to Covid-19, the six teams managing to play one round before the pandemic killed off the rest of any prospective season.

It was a game that McFarland and his teammates lost 52-27 in Perth, the squad subsequently stranded in Auckland for well over 100 days.

Eventually making his way home, the back-row signed a contract with Major League Rugby team, the Dallas Jackals, where he intended to play in the team’s inaugural season in 2021, but two weeks before what was scheduled to be their first game, the team deferred their entry to the competition.

In May, the Telegraph’s Charlie Morgan investigated how Saracens came to pick up McFarland. It was Nick Kennedy, Saracens’ head of recruitment, who used his connections to source footage of the former basketball centre.

Plenty have sung the 26-year-old’s praises, his performance against Northampton in Sarries’ 42-38 win in late-May no doubt the back-row’s biggest moment in a black shirt to date.

When asked who he had learnt from the most during his first season at the club, the majority of the names were to be expected. As a forward, Billy Vunipola, Maro Itoje and Jackson Wray seemed like obvious mentors, but when the names Owen Farrell and Alex Goode left the Samoa international’s mouth, there was plenty of intrigue.

Boil it down and it makes plenty of sense. Despite his large frame, McFarland is light on his feet, is athletic and is perhaps one of the most reliable ball handlers in the Saracens squad.

It is the nitty gritty that McFarland has worked on this season and Messrs Vunipola, Wray and Itoje have been the perfect trio to educate the Pacific Islander on the dark arts.

“It was surreal,” McFarland said when asked about joining the club. “When I had the interview, I was in Samoa just playing club rugby.

“It was really big for me at the time. To be able to get in contact with Saracens and to come here and play for them was just big for me.

“I thought I knew all about rugby, and it was not until I got here that I found out I didn’t know everything.

“All I had to do was learn from the coaches and the lads here, and all I have been doing is trying to take in all I could from the lads, and it has been great.”

Playing Leicester Tigers at Twickenham on Saturday afternoon, McFarland jokes that the weather in preparation for the final has been more of what he is accustomed to in Samoa. 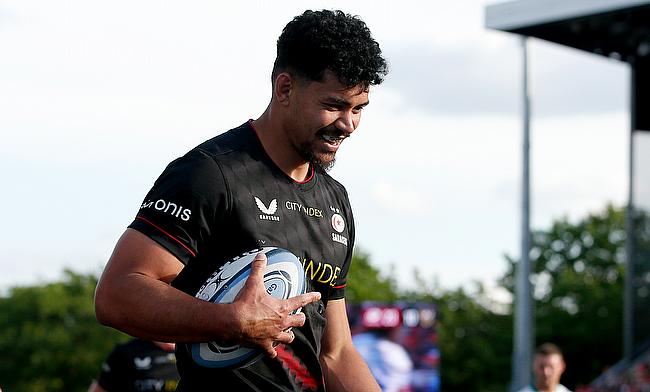 His summer plans will take him back to his home country, the forward set to add to his tally of two caps in the World Rugby Pacific Nations Cup that takes place in July. Helping Samoa qualify for the Rugby World Cup next year, McFarland no doubt has his eyes on boarding a relatively short flight to France in just over a year.

Signing a contract extension with Saracens in January, his long-term future will be tied to North London for a while longer and given how he has excelled in his first season, there will be plenty of interest around the 26-year-old's progress at one of Europe’s top clubs.

After the club's enforced relegation, the five-time Premiership champions have returned to the top-flight with a bang as McCall's charges finished second in the table.

In Leicester this weekend, Sarries come up against a side they have beaten once and lost to once this term so there is not much separating the two teams that ended the regular season as the first and second seeds.

For plenty of Saracens fans, this game will bring back joyous memories. In 2011, the club won the Premiership for the first time and that single trophy lift in West London kick-started a decade of dominance that saw the side win four more titles and three Champions Cup crowns.

The opposition that day 11 years ago? You guessed it, Leicester.

In McFarland’s case, he has only seen the club’s exploits happen from the other side of the world, the Samoan part of this new generation of players who are helping Saracens re-establish themselves amongst the elite.

“This is my first season in the Premiership and to make the finals, it is a big week for me,” McFarland said. “I can’t wait to go out there and play for my boys, for the team and it is probably one of the best memories of my whole career. I am just excited for that, to go out and enjoy it with the boys.”

Theo McFarland's progress will no doubt continue over the next year ahead of the World Cup but are you ready to hear the stadium roar at Rugby World Cup France 2023? STH UK can help you book your ultimate Rugby experience, as the exclusive Official Hospitality Sales Agent for Great Britain – and therefore the only place for fans from England, Scotland and Wales to purchase their ticket-inclusive hospitality packages officially.