Hartpury beat rivals Exeter to return to the top 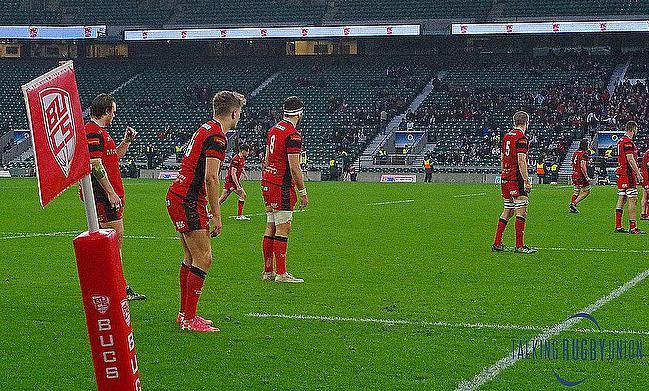 Hartpury University recorded a superb win over the University of Exeter to go to the top of the BUCS Super Rugby table.

Sean Lynn’s side defeated the domestic champions away from home to move to the summit, but on their coattails are Cardiff Met who produced an excellent display to beat Northumbria University.

Below is our BUCS Super Rugby review as well as a round-up of the final fixtures in 2018 in some of our featured leagues.

Hartpury University returned to the top of BUCS Super Rugby as they ran-in four unanswered tries to beat the University of Exeter.

The result means Hartpury have leapfrogged their rivals into top spot after becoming the first side to win at Topsham since February 2017.

?? | What a day for Hartpury Rugby! Congratulations to our AASE team, who come back champions... but also to our #BUCSSuperRugby team who leave @ExeterUniRFC with a bonus point and a new record!

Two tries, including one from Jack Johnson, helped the BUCS Super Rugby Championship holders into a 15-0 half-time lead before two further scores after the break wrapped up the bonus-point victory for Sean Lynn’s men.

Hartpury are now one point clear of Exeter, who have dropped to third in the table after this defeat.

Cardiff Met powered to a bonus-point win over Northumbria University to move level on points with leaders Hartpury.

Met have won five of their last six matches and the 2017/18 runners-up are once again showing their quality this term.

A try from Aled Ward and a penalty from Harry Johnston helped Met to a 10-7 lead at the break after Northumbria had opened the scoring.

The hosts added two more tries, including one from Jack Samuel, to ultimately secure the victory with Northumbria’s second score only proving to be a consolation.

Durham University clinched their third victory on the spin as they held off a resilient Nottingham Trent at Lady Bay.

After Scott Hall’s early try, the visitors gradually took control in the Midlands.

Tries from Ben Stevenson and Fitz Harding were sandwiched in between two penalties from man of the match Myles Rawstron-Rudd.

Trent’s Caetano Branco and Durham’s Tom Lewis exchanged scores after the break, but when Harry Graham raced over, the hosts were firmly back in the contest.

However, their efforts were to be in vain as Durham grabbed a bonus-point score in the final 10 minutes to continue their recent good form.

Durham Head Coach Alex Keay: “We have to give Trent credit. I think they are a dogged side and they are hard to beat and break down. It has been a fault of ours this year that we haven’t picked up the bonus-point so getting that tonight was pretty good.

“The results tonight have been off the wall [across the league]. Everyone is beating each other, but I think there is four points between the top five so it’s pretty close and we are in the mix.”

Man of the Match Myles Rawstron-Rudd: “We are playing for each other as much as anything and we back our processes and luckily, the results are starting to come our way.

“We have had Cardiff Met, Hartpury and Bath on the bounce and from Durham, that is a pretty long way so coming down to Nottingham seems like a trip down the road! We are looking good and hopefully we can build from here.”

The University of Bath are just four points off the leaders in BUCS Super Rugby after securing an excellent away win against Loughborough University.

Bath scored the only try in the first half from a rolling maul to give them a healthy 13-0 lead and a second score just before the hour put them 20-3 in front.

Another penalty and a score by the Blue and Golds in the final 10 minutes put the icing on the cake for Aaron James’ side while Loughborough’s late try was all they could muster up.

Cardiff University are off the bottom of BUCS Super Rugby after storming to a superb win against Leeds Beckett University.

Penalty try to Cardiff is the last act of the game taking the score to Cardiff 30 - @LeedsBeckettRFC 3. Excellent display from both sides considering the conditions. @_BucsStopsHere @BUCSSuperRugby

Scores from Alex Everett and Marcus Ramage, as well as a close-ranged effort and a penalty try, reflected Cardiff’s dominance as they claimed their second win of the campaign.

The Welsh outfit are now one point clear of Beckett, who fell to the foot of the division after suffering their fifth consecutive defeat.

League leaders Newcastle University saw their 100 per cent record come to an end as they were beaten by an in-form University of Birmingham 33-24.

The University of Nottingham failed to capitalise on Newcastle’s defeat as they were narrowly beaten 25-24 by Loughborough 2nds while third placed Durham 2nds had to settle for a 23-23 draw against the University of Edinburgh.

Hartpury 2nds have moved a step closer to the South A title after securing their ninth successive win of the campaign. The Gloucestershire outfit maintained their perfect record following a 68-14 win, but the University of South Wales are staying on the heels of the leaders after beating Exeter 2nds.

St Mary’s University have moved four points clear at the top of South B after hammering Cardiff 2nds 42-0. Pete Richards’ side now have some breathing space at the summit after second placed Exeter 3rds fell to back to back defeats after losing 34-19 against Reading University.

The top of the table clash between Manchester Met and the University of Liverpool was postponed, but there were two other fixtures in Northern 1A before the division takes a break for Christmas.

Newcastle 2nds were able to move to within two points of the leaders after beating their 3rd XV 19-10 while Durham 4ths picked up their third win of the campaign after defeating the University of Hull 36-14.

In Northern 2A, Keele University made it six wins from six as they hammered Liverpool 2nds 41-0. Also, Lancaster University secured their fourth win of the campaign as they beat Manchester 2nds 23-15.

With Leeds Beckett 3rds and Sheffield 2nds postponed, there was only one game in Northern 2B and it saw table toppers Northumbria 2nds inch closer to the title after a 41-6 win over Leeds Beckett 4ths.

Liverpool John Moores University’s clash with Manchester Met 2nds was called off in Northern 3A which meant the University of Chester were able to go to the top of the division after thrashing Edge Hill University 61-0.

In Northern 3B, league leaders York St John University suffered a surprising defeat as they lost 20-10 to Sheffield Hallam 2nds, while Leeds 3rds moved into the top three after beating Newcastle 4ths 12-10.

The University of Warwick have gone to the summit of Midlands 1A in the latest twist in this title race. They beat rivals Oxford Brookes University 14-0 to move four points clear after Loughborough 3rds lost 23-17 against Harper Adams University. Meanwhile, Nottingham Trent 3rds are still in the promotion picture after clinching a 22-15 win away at Leicester University.

With Nottingham 3rds against Warwick 2nds postponed, the University of East Anglia extended their lead to eight points at the top of Midlands 2A following a 36-17 win over Nottingham Trent 3rds. Elsewhere, Birmingham 3rds ended 2018 with a maiden victory as they beat Coventry University 19-3.