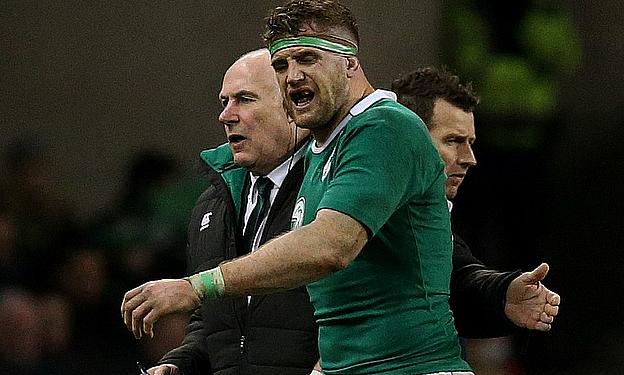 Lancaster now has the excuse to play JJ on the wing - Bad News for Fans
Pape cited for Heaslip incident
Six Nations Round 2 Review
Six Nations: XV Team of Round 2

Jamie Heaslip has accepted Pascal Pape's Twitter apology for the crude knee to the back that could end the Ireland number eight's RBS 6 Nations campaign.

France lock Pape faces a disciplinary hearing on Wednesday where he could be banned for the remainder of the tournament after kneeing Heaslip in the back during Ireland's 18-11 victory in Dublin.

The 34-year-old Les Bleus star will discover his fate at a disciplinary hearing in London on Wednesday, and put in an advance move to curry favour with the panel by apologising to Leinster's Heaslip on social media.

Heaslip suffered three fractured vertebrae in his back from the challenge that earned Pape a yellow card at the Aviva Stadium on Saturday.

Pape tweeted (see bottom of the article): "Sincerely sorry to have injured @jamieheaslip in this action of the match, not at all my intention to do him any harm #objectivityforsome", on Tuesday night, just hours before his disciplinary hearing.

Irrespective of whether the Stade Francais second-row's move was designed to edge the independent panel towards leniency in his hearing, Leinster's loose forward Heaslip accepted the apology wholeheartedly.

Heaslip replied by tweeting a message in France, which translates as: "@pascalpape thanks for your message. Rugby is a physical game and one accepts that can happen. I accept your apology completely".

Heaslip will be sidelined for the next month, already leaving him a doubt for Ireland's final Six Nations clash, in Scotland on March 21.

The influential 31-year-old will be a loss to Ireland's bid to retain their title, especially in the pivotal England clash in Dublin on March 1.

The Six Nations' independent citing team deemed Pape still has a case to answer though, and if found guilty he could miss the rest of the competition. 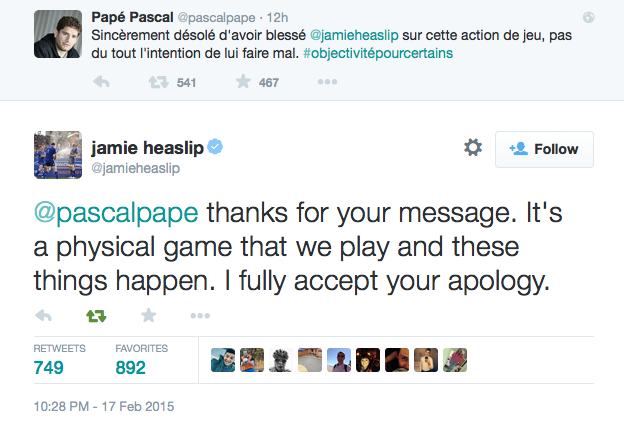