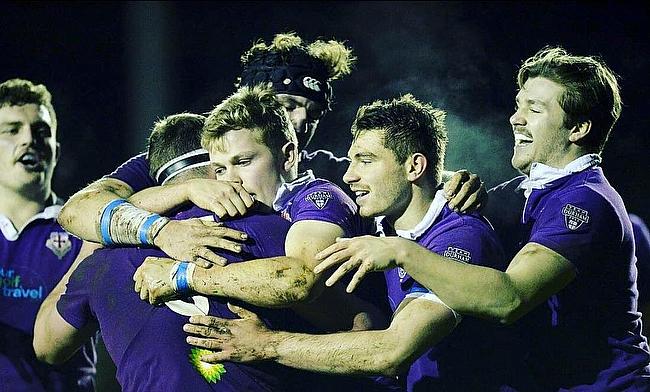 Durham University recorded their second bonus-point victory of the BUCS Super Rugby season as they narrowly beat the University of Exeter on Wednesday evening.

Alex Keay’s side are now level on points with league leaders Northumbria after another sensational round of BUCS Super Rugby action.

The highest margin of victory across the division was just nine points and Leeds Beckett were the team to achieve that result following an intense clash with Hartpury which saw two red cards.

Elsewhere, Cardiff Met made it two wins on the spin as they edged past Loughborough University while the University of Bath held off a stubborn Nottingham Trent outfit.

Below is a full BUCS Super Rugby round-up as well as a review from some of our featured BUCS leagues.

Durham University’s Fitz Harding scored a late try as the north-east side clinched a bonus-point win against the University of Exeter in an enthralling BUCS Super Rugby contest.

The flanker waltzed through the Exeter defence with eight minutes remaining to seal back to back victories for Alex Keay’s men.

However, Exeter fought back as scores from Josh Pieterse and Jack Rouse – to add to Pierre Thompson’s earlier try – saw the defending BUCS Super Rugby domestic champions lead 21-19 at half-time.

But, Durham weren’t to be denied as Harding bounded through the Exeter defence to touchdown late on to secure the victory which leaves his side joint top of the BUCS Super Rugby table.

Cardiff Met University made it two wins from two at the start of the new BUCS Super Rugby season after a narrow home victory against Loughborough University.

A James Spencer score after 22 minutes provided Loughborough with a solid start, but they were unable to build on that as a late penalty try earnt the Midlands side a consolation point.

In between Loughborough’s touchdowns, Barry Karea and Edoardo Balocco scored Cardiff Met’s tries while Russell Bennett kicked 11 points for the hosts who remain on the coattails of early league leaders Northumbria University.

Hartpury’s Jordan Liney and Beckett captain Connor Lloyd were both dismissed in the second period, but the visitors were able to seal the win after going down to 14-men.

With the score at 18-17, an opportunistic try from Tom Williams as well as excellent scores via Harri Collier and Chester Duff sealed Beckett’s first victory of the new season.

Jack Reeves and Elias Craven scored first-half tries for the hosts, but despite controlling the majority of the opening 40, Hartpury only led 15-10 at the break as Beckett hit back with a try from Johan Visser just before the interval.

Nathan Chamberlain pinged over a penalty to extended Hartpury’s lead after the restart, before Lloyd reduced the deficit just a single point following an intelligent try.

Lloyd did surpass 100 BUCS Super Rugby points in this match, but his evening came to an early conclusion when he was sent-off along with Hartpury replacement Liney after an altercation.

But it was the visitors who shone without their skipper as they scored three tries to clinch a victory for the second year in a row at Hartpury.

The hosts did mount a potential fightback as Robbie Smith dotted down, but it was too little too late for the current BUCS Super Rugby champions.

Man of the Match John Okafor (Leeds Beckett): “It was a physical game. We did a review on Hartpury and there go to is their physicality. Their line-outs, mauls and scrums are their bread and butter so we had to match them up front.

“After the Exeter loss, we had a long look at ourselves and said we need to right some wrongs. We wanted to send out a statement to the rest of BUCS Super Rugby so that performance today was big.”

Leeds Beckett Programme Manager Kerry Wood: “I am really pleased. It was a tricky start for us after going two scores down. It was pleasing to see the boys pull it back and regroup. To get that crucial score before half-time was key for us.

“Anyone could have won that game today and the scoreline may not reflect that, but if they had had another five minutes, it could have been squeaky bum time! We dug deep. There are not too many teams that will come here and put Hartpury away.

“Our character has been built over the last couple of years. We only lost one game away from home so for some reason we travel better than when we play at home! I don’t know the reason for that, but we dig in together as a whole team.”

The University of Bath registered their first win of the BUCS Super Rugby season as they hung on for a bonus-point victory against Nottingham Trent University.

The hosts led 20-17 at half-time as Tom Doughty scored a hat-trick while Ed Rimmer also crossed, with Scott Hall and Matt Riddington replying for Trent.

Angus Hinton and Will Butt both touched down after the break to put Bath 34-17 ahead.

However, scores from Cecil MacCarthy and Harry Graham, either side of a Bath penalty try, set up a tense finale, but the Blue and Golds hung on to secure their opening victory.

Captain Tom Doughty speaking to Team Bath: “We’re buzzing to get the first win under our belt. It was a bit too close at the end and that’s something we’ll go back and look at but the main focus this week was to improve our attacking structure and we did just that, so I’m proud of the boys.”

Head of Rugby Aaron James told Team Bath: “After our opening two losses, we needed to get the monkey off our back and we did that tonight. There was some outstanding rugby at times but we just have to watch our discipline as it made the game much closer than it should have been.”

Reigning BUCS champions Hartpury University began the defence of their title with a hard-fought 36-24 win over Cardiff Met while last year’s runners-up, the University of Exeter flew out of the blocks as they secured a 51-0 win against Oxford University. The final result in the division saw the University of Bristol beat Swansea University 26-12.

Newcastle University and Durham 2nds maintain their 100 per cent starts to the North A season after bonus-point victories over Loughborough 2nds and the University of Birmingham, respectively. Newcastle defeated Loughborough 24-15 while Durham had a much tighter affair away at Birmingham, but managed to secure a 29-27 victory in the Midlands.

Mixed bag of results for EURFC yesterday, but some significant ones nonetheless:

Hartpury 2nds secured back to back victories in South A as they defeated Exeter 2nds 37-26 to stay at the summit of this division. Bath 2nds bounced back from their opening loss against the University of South Wales to beat the University of Bristol 26-19 in an entertaining contest in the West Country.

In South B, St Mary’s University clinched their first victory of the season as they beat Reading University 38-7 away from home, but Hartpury 3rds could not make it two wins from two as they lost 22-15 to the University of Portsmouth.

The University of St Andrews made it two victories on the spin as Scott Lawson’s side beat Edinburgh 2nds 17-12 while in an all Aberdeen affair, the university’s first XV defeated their 2nd XV 40-15.

The other result in the divisions saw Heriot-Watt University comfortably beat the University of Dundee 42-24.

The Northern 1A campaign began with a bang as the University of Liverpool thrashed Newcastle 4ths 72-8 while newly promoted Manchester Met University picked up an excellent 66-28 victory against Durham 4ths away from home. Elsewhere, Newcastle 2nds eased to a 57-13 win against the University of Hull.

Last year’s Northern 2A runners-up, Keele University, made a flying start to the new campaign as they thumped UCLAN 71-0 at home. There was also another big scoreline in this division as Sheffield Hallam University defeated Manchester 2nds 41-33 in Yorkshire. Meanwhile, Lancaster University beat Liverpool 2nds 19-13.

Northumbria 2nds and the University of York both began the new Northern 2B season with bonus-point wins. Northumbria beat Leeds 2nds 62-12 while York thrashed Sheffield 2nds 40-0. There was also an opening day victory for Leeds Beckett 3rds as they defeated their 4th XV 49-17.

Liverpool John Moores University are the early leaders in Northern 3A after a convincing 43-3 victory over Edge Hill University. The University of Chester and Man Met 2nds also begun the new season with wins as Chester beat Liverpool 3rds 48-5 while Man Met defeated Bangor University 27-19 away from home.

Newly promoted side the University of Huddersfield lost their first game in Northern 3B as Newcastle 4ths clinched a 28-19 victory while two sides based in York also triumphed. A last minute penalty for York 2nds helped them beat Sheffield Hallam 2nds 18-17 while York St John University secured a 27-12 win over Leeds 3rds.

In Midlands 1A, Loughborough 3rds secured an opening day victory against Oxford Brookes University as the hosts won 53-34 while Nottingham Trent 2nds defeated the University of Warwick away from home.

Nottingham 3rds are at the summit of Midlands 2A after week one following a thumping 51-7 victory over Birmingham 3rds. The University of East Anglia also picked up a victory on Wednesday as they beat recently relegated Coventry University 32-10 while Nottingham Trent 3rds defeated Warwick 2nds 27-22.