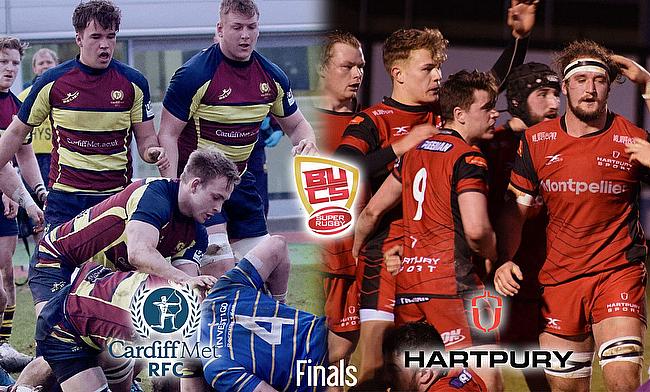 Cardiff Met and Hartpury will go for glory at Twickenham
©TRU

Ahead of the BUCS Super Rugby Championship final on Wednesday, we look back at the season both Hartpury and Cardiff Met have had as they prepare to do battle at Twickenham.

It has been quite a journey for Hartpury over the last 12 months. After creating history in National One last term, their BUCS side completed the league and cup double. The likes of Sebastian Negri and Harry Randall were the standout performers as Hartpury clinched the inaugural BUCS Super Rugby title before triumphing at Twickenham against the University of Exeter last March.

However, with some of their star players moving on from the university game, Sean Lynn’s side had to rebuild and the transition phase was clear for all to see during the opening couple months of this season. Hartpury picked up just one win in their first seven matches and heading towards Christmas, it looked unlikely that the reigning champions would challenge for a return to Twickenham.

But, a run of eight wins from their final nine matches in BUCS Super Rugby saw Hartpury finish the domestic season in fifth place which earnt them a quarter-final against Leeds Beckett in Yorkshire. The Gloucestershire outfit showed their power and class at West Park Leeds RUFC to clinch a 29-10 win and progress to the last four where they faced a re-run of last year’s final against Exeter.

Exeter had taken the BUCS Super Rugby crown from Hartpury and were arguably the favourites to reach Twickenham for a third successive year, but a simply stunning 41-15 victory at Sandy Park means Hartpury will be aiming to keep hold of their championship title at England HQ on Wednesday.

Head Coach Sean Lynn: “It was a great result against Exeter and I think it was unexpected too. I can’t fault the effort of the side and we put Exeter under pressure throughout the game. They were forced into uncharacteristic errors and we were clinical.

“We were the underdogs because of what Exeter have achieved and at home, they are always very strong. We knew it would be tough even at Sandy Park so to reach the final is a big achievement from the team.

“It shows our progress enormously, but we face a Cardiff Met side that have had a wonderful season. Danny Milton and his side have done a really good job and that has been rewarded by reaching the final, but for us, it would mean everything for the club to win at Twickenham again. We have four teams who all work really hard and the support we have had has been superb.

Last season, Cardiff Met ended their maiden campaign in BUCS Super Rugby in seventh place, but one year on, the Welsh university now find themselves at the home of English rugby and on the verge of glory.

Danny Milton’s side entered this BUCS Super Rugby season aiming to become more consistent and with all eyes potentially on the usual suspects such as Exeter, Loughborough University and Hartpury, Cardiff Met won six of their first seven matches which started to turn heads.

Since those opening months, Cardiff Met have hardly let their standards slip as their confidence has continued to grow. They come into this final at Twickenham having lost just two of their last 10 matches and that run of form guided them to a third placed finish in the domestic season. They carried their momentum into the knockouts where they edged past Loughborough 10-5 in the quarter-finals, but there was nothing narrow about their semi-final victory.

Cardiff Met came up against a University of Bath side that had dispatched Northumbria University in the last eight, but a superb 55-21 win away from home secured the Archers’ place at Twickenham.

So, Cardiff Met are back at England HQ for the first time in five years and credit must be given to the work the likes of Chris Davey and Danny Milton have done over that period of time. The talent they have had at their disposal this term has also been a testament to the direction the university is heading in with players such as Tom Morgan, Aled Evans, Max Llewellyn and Alex Dombrandt all impressing.

Cardiff Met will know the challenge of facing Hartpury will not be easy and having picked up just one win from their last eight meetings with the current holders, the stage is set for the Archers to make history.

Cardiff Met Director of Rugby Danny Milton: “We were really disappointed with our performance in the quarter-final against Loughborough. We didn’t think we had done ourselves justice. We just about got over the line.

“After Bath’s great performance against Northumbria last week, we knew we had to be at our best. I am really proud of the boys. It was one of those nights where the ball stuck and we played some really good stuff.

“We have worked really hard this year and it is credit to the stuff Chris Davey has done here over the last 15 years. We have continued to develop and now we are really excited by the challenge of facing Hartpury who put 40 points on Exeter which is a bit scary!

“Since Christmas, Hartpury have certainly turned a corner and they have a fantastic rugby programme down there. However, I don’t think anyone would have expected such a comprehensive result against Exeter in the semi-finals. I was expecting more of a ding-dong battle and I wasn’t too sure who would come out on top, but as it is, Hartpury put in a fantastic performance.

“It would mean a huge amount and be fantastic for this group of players to win on Wednesday and we are looking forward to a great day for our rugby programme.”