Hartpury return to top with wins over Northumbria and Leeds Beckett 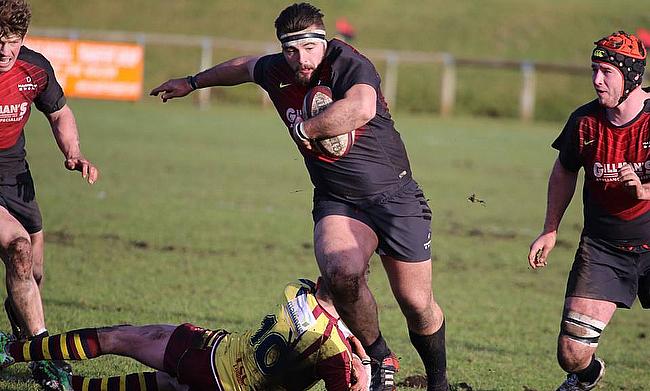 Greenwood: “You won’t find a bigger fan of University Rugby than me”
Loughborough move to the summit of Super Rugby
Hartpury continue fine form while Northumbria get off the mark

Hartpury College returned to the top of the BUCS Super Rugby table after two wins in five days against Northumbria and Leeds Beckett.

The league leaders dispatched Northumbria last Friday night before having to fightback against Leeds Beckett yesterday to maintain their 100 per cent start to the season.

It is now seven straight wins for Sean Lynn and John Barnes’ side and they sit six points clear at the top of the division. Second placed Loughborough fell to a narrow defeat away at Durham while current champions Exeter made it five victories on the spin as they triumphed over Bath.

In the final fixture in Super Rugby this week, Northumbria take on Cardiff Met on Saturday in the north-east.

Elsewhere across BUCS, we have new leaders in North A in the form of Nottingham Trent whilst Bristol remain top dogs in South A. In the Women’s competition, Northumbria continue to hold on to top spot in Premier North A while Oxford tasted success once again in Premier South A.

This week was also dominated by cup action as the BUCS Men’s Trophy as well as the Northern and Midlands Conference cups took centre stage.

BUCS Super Rugby leaders Hartpury College had to battle before clinching a bonus-point victory over a gutsy Leeds Beckett side.

College moved back to the top of Super Rugby on Friday night following a 26-11 triumph away at Northumbria and made it seven wins in a row thanks to this hard-fought victory over Beckett.

After being 20-8 behind at half-time, Sebastian Negri as well as Harry Wilson, Craig Bachurlewski and Maliq Holden all crossed in a dominant second period for College.

It had been all Leeds Beckett in the first-half and they were showing that they were much better than their league position suggested.

Rooted to the foot of the table, tries from James Elliott and Rory Mason helped the Yorkshire outfit into a surprise lead at the break, but they were simply blown away in the second-half as Hartpury continued their 100 per cent start to the season.

Hartpury Head Coach Sean Lynn: “The performance levels in the first half were nowhere near where we need them to be, which was a worry, and all credit to Leeds Beckett who were able to take full advantage. I was pleased with the improvement in the second half.  We were still far from perfect and there are definitely things that we need to keep working on, but the attitude was good.”

Durham made it four wins from their last five games as they edged out last season’s finalists Loughborough at Durham City Rugby Club.

Calum Lynch’s converted try gave the visitors an early 7-0 lead, but Durham hit back and Ali Neden’s try helped make it 10-10 at half-time.

A Rob Stevenson try and a penalty from Ben Cook gave Durham a five point lead just before the hour.

However, a Mark Dixon converted score put Loughborough 20-18 up heading into the final quarter of this match, but Cook was able to keep his nerve six minutes from the end as he slotted over a penalty to clinch the win for the home side.

Exeter moved up to third in the Super Rugby table thanks to a fifth win on the bounce at home to Bath.

After an early try by the forwards had put Exeter ahead, Ted Landray slotted over two penalties to put the hosts 11-0 up at half-time.

Landray was on point with his boot after the break to stretch Exeter’s lead, but his opposite number Hugo Stiles found his kicking range to reduce the home sides’ lead back to 11 points.

The first try of the game came shortly after as the highly rated Tom Lawday barged his way over for Exeter, but back came Bath as Jack Davis crossed from a driving line-out.

Both sides exchanged tries once again to end the scoring for the day as Exeter’s James McRae claimed their second try to ultimately secure victory whilst Dan Rowland dotted down late on for Bath.

In North A, we have new leaders at the top of the division. Nottingham Trent beat Leeds 41-17 to move two points clear at the summit after picking up four wins from their last five games. Their city rivals, Nottingham, had been sitting pretty at the top, but back to back defeats including yesterday’s 22-20 loss to Birmingham now means Notts have dropped down to third. Elsewhere, Bishops Burton are now up to second after a 27-13 win over Loughborough 2nds whilst Newcastle v Durham 2nds was postponed.

The University of Bristol returned to winning ways in South A as the current league leaders beat the University of South Wales 36-20 to secure their sixth victory of the campaign. They are now four points clear at the top  after Cardiff University moved up to second in the table following an excellent 20-12 win away at Hartpury College 2nds.

Into the Women’s competition where Premier North A league leaders Northumbria were back in action this week. They returned with a bang as they thrashed neighbours Newcastle 62-0 to remain one point clear at the top.Durham 2nds stayed second in the table thanks to a comfortable 27-5 win over Loughborough whilst in the other fixture in this division, Edinburgh picked up their third win in a row as they secured a 38-10 victory away at Leeds Beckett.

In Premier South A, there was only one game this week and Oxford made it back to back wins as they beat Bristol 21-14 to move up to fourth in the table.

The Round of 32 stage took place this week in the BUCS Trophy meaning some of the top men’s sides in the country battled it out for a spot in the last 16.

North B league leaders the University of Edinburgh maintained their 100 per cent start to the season in all competitions as they beat Northern 1A side  Durham 4ths 31-11. Fellow North B outfit the University of Strathclyde were beaten 22-10 by Midlands 1A club Leicester who remain unbeaten this campaign whilst Loughborough 3rds beat Gloucestershire 23-15 to advance into the next round. Elsewhere, the University of Aberdeen were awarded a walkover against Manchester and Northern 1A side Sheffield beat Worcester 24-15.

South B table toppers Exeter 3rds responded from their first defeat of the season last week by progressing into the last 16 of the BUCS Trophy thanks to a 38-9 win over Hartpury College 3rds. It wasn’t quite  as straightforward for Cardiff Met 2nds as they were held to a 17-17 draw by Reading whilst there was worse news for  fellow South B side St Mary’s who were beaten 34-29 by Harper Adams. Elsewhere, Bristol 2nds beat Exeter 4ths, but Portsmouth lost 19-10 to Plymouth. Bath 2nds’ trip to Cardiff 3rds was postponed.

Leeds Beckett 2nds currently lie second in the Northern 1A table as they are also through to the last 16 of the BUCS Trophy after beating Hull 31-22 whilst the same could not be said for Newcastle 2nds as they were thrashed 51-27 by Glasgow.

Northern 2A league leaders the University of Liverpool are through to the quarter-finals of the Northern Conference Cup after a 31-12 home win over Leeds Beckett 3rds which was their six straight win of the season.

Manchester Met 1sts also advanced into the last eight as they beat rivals Manchester Met 2nds (Cheshire) 55-3. Elsewhere, Northern 2B side Sheffield Hallam thrashed Leeds 3rds 87-5, Leeds 2nds were also beaten by a team from the steel city as the University of Sheffield 2nds triumphed 38-12 while Edge Hill beat York 31-12.

Coventry were unable to make it five straight wins for the season as their last 16 Midlands Conference Cup tie was postponed against East Anglia 2nds. However, fellow Midlands 2A side Nottingham 4ths remain unbeaten as they advanced into the quarter-finals of this competition following a 37-5 win over Northampton 2nds. The other fixture involving two Midlands 2A teams saw Birmingham 3rds beat Nottingham Trent 3rds 19-13 away from home.