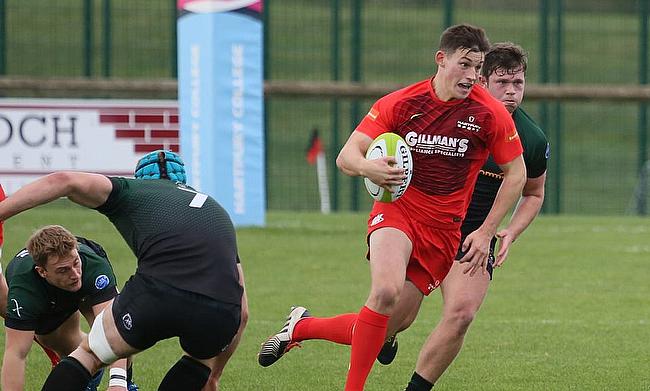 Hartpury College picked up a narrow win against Cardiff Met to move top of the inaugural BUCS Super Rugby table after three rounds of the competition.

They headed into this week’s fixtures level on points with Loughborough University, but the Midlands outfit suffered their first defeat of the season away at the University of Bath who have now picked up maximum points from their first two games. Durham University and current champions Exeter both claimed their maiden wins of the campaign beating Leeds Beckett and Northumbria respectively.

Elsewhere across BUCS this week, Leeds, Nottingham, Bristol, Edinburgh and Leicester continued their promising starts to the season while the University of Edinburgh Women’s side racked up a century of points this week and champions Cardiff Met thrashed Cambridge.

Hartpury College recorded their third straight win of the BUCS Super Rugby campaign thanks to a 20-17 victory over Cardiff Met in Wales.

Corey Whane scored the only try of the first half on eight minutes as the home side led 5-3 at the break, with Sam Leeming nudging over a penalty for College.

Hartpury hit back inside the first 20 minutes of the second half as they took control of this clash thanks to tries from Maliq Holden, Josh Poole and Harry Cochrane.

The pressure then came from Cardiff Met and they were rewarded for their endeavour when Aaron Wainwright’s late try set up a nervy end.

However, Hartpury held on for the crucial win to move top of the division, after nearest rivals Loughborough failed to make it three wins out of three.

Following their 38-17 victory over Northumbria on Friday night, Bath made it back to back victories as they ended Loughborough’s unbeaten start to the term.

A Will Kaye penalty and a Joss Morgan try helped Loughborough lead 10-7 at the break with Tom Doughty crossing for Bath.

Doughty scored his second via a catch and drive from a lineout to give his side the lead early in the second-half before Bath capitalised on their power up front once again as prop Alex Wood barged his way over to give the Blue and Gold’s a 21-10 advantage.

Replacement Sydney Blackmore brought the away side back into the game with his try to set-up a tense finale, but Craig Duncan’s score put the game beyond Loughborough as he dotted down Bath’s fourth try which Hugo Stiles converted.

University of Bath Head Coach Mark Lilley said: “To bounce back from ten points down was brilliant and to start off with two wins from two is a credit to how hard the boys have been working.

“We went a little off page in the first half, mostly because the boys were so keen. We said at half-time about going back to our processes and what we know, and we executed our game plan really well in the second half.

Durham secured their first victory of the inaugural BUCS Super Rugby campaign as they beat a Leeds Beckett side that are still winless.

The game was tied at 10-10 at half-time after a see-saw first half which saw Ollie Hutson’s score cancelled out by a Durham try while both kickers exchanged penalties.

Durham then went through the gears in the second 40 as relentless pressure saw the hosts score two more tries and a penalty to take a 27-10 lead. Hutson then dragged Beckett back into the contest with his second score of the evening before the away side touched down again to reduce the deficit to just three points.

However, Durham secured the crucial next score as Tom McLean cut through the Beckett defence to cross in the corner and wrap up a thrilling win for his side.

Exeter University finally got off the mark in BUCS Super Rugby and did so in style with this impressive victory over Northumbria.

The current BUCS Championship trophy holders had the game wrapped up at half-time after a Penalty Try and further scores from Ned Warne and Tom Lawday helped them into a 24-0 lead.

Captain Oli Robinson powered his way over the line just after the break for Northumbria, before a second yellow card of the afternoon for the North-East side allowed Lawday to cross again for Exeter.

Northumbria then got on the board once again, but George Smith, James McRae and Matt Elliet (2) added further tries for the Green and Whites.

In North A, Loughborough University’s 2nd XV made it three wins on the spin. They eased to a 36-13 victory over the University of Birmingham while Nottingham Trent University suffered their third straight defeat as they lost 34-28  to Leeds University with captain Rory Simpson getting on the score-sheet. Elsewhere, like Leeds, the University of Nottingham maintained their 100 per cent start to the season with a 41-0 thrashing of Bishop Burton College and Durham 2nds also remain unbeaten after a 30-17 win over neighbours Newcastle.

The University of Bristol just about secured their third win in as many games in South A as they edged out Exeter 2nds 34-33 in a pulsating battle on the south-coast. The closest challengers to Bristol thus far are Hartpury 2nds and Cardiff University. Both sides made it two victories from their first three fixtures of the season with Hartpury beating Swansea University 17-13 while Cardiff dispatched UWE 34-13 at home. Elsewhere, there was more joy in Wales as USW picked up their first win of the season as they beat King’s College London 28-11.

The University of Edinburgh have begun the North B campaign with three wins from three as they comfortably Durham 3rds 36-10 which ended the North-East side’s unbeaten start to the season while Worcester fell to their third straight defeat as they were beaten 38-5 at home by St Andrews who have now won two on the bounce.

In South B with table toppers Cardiff Met 2nds not in action, it was a chance for some sides to gain ground on the early league leaders. Bath 2nds did just that as they secured a third win of the season thanks to a 42-3 bonus point victory over Southampton who have now shipped 102 points in the last two weeks. Other results in the division included a first win of the season for St Mary’s University as they beat Portsmouth 23-6.

In Northern 1A, Durham 4ths sealed their second win on the spin as they thrashed newly-promoted Lancaster University 53-0 while Leeds Beckett also claimed two consecutive victories as they brushed aside Newcastle 2nds 45-5 in Yorkshire. The University of Liverpool made it back to back wins with victory over UCLan in Northern 2A while elsewhere, Keele University beat Bangor 21-7 and Manchester Met eased past Chester with a 47-0 triumph.

The University of Leicester maintained their perfect start to the new season in Midlands 1A as they made it three wins in a row thanks to a 44-12 victory away at Harper Adams. Elsewhere in the division, Nottingham 2nds suffer their second straight defeat as they were edged out 31-27 by Warwick and Nottingham Trent 2nds beat Bedford 38-0.

In the Women’s BUCS competition, Edinburgh thrashed Leeds Beckett 107-10 in Premier North A while the 2016 runners-up, Northumbria, made it two wins from two as they comfortably beat city rivals  Newcastle 1sts 58-10.

In Premier South A, Cardiff Met showed why they are champions as they thumped Cambridge 72-0. Elsewhere, BUCS 7s holders Gloucestershire were beaten 32-7 by a spirited Exeter side at the Prince of Wales Stadium while Bristol demolished Oxford 43-0.

With 50 days until 'The Varsity Match' at Twickenham, Fergus Taylor’s Oxford University  side were beaten 50-0 by Northampton Wanderers while varsity rivals Cambridge Blues lost by the same score line against Trinity College, Dublin with both teams conceding eight tries.