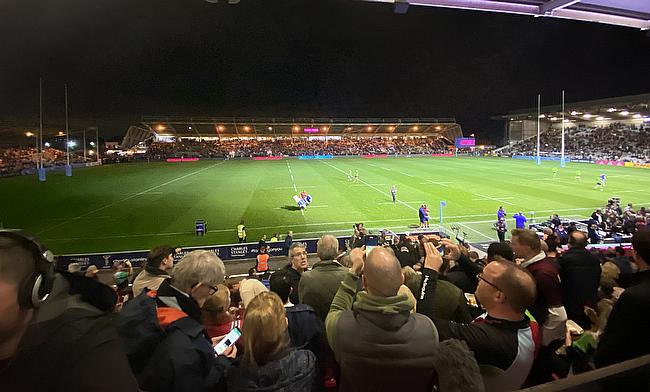 Will Cliff Exclusive: I am part of a group where I really do believe winning in the Premiership is achievable
Schedule for Heineken Champions Cup 2021/22 season confirmed
Worcester flanker Ted Hill suspended for three games
London Irish complete signing of Cillian Redmond and Ciaran Parker

Like in their epic semi-final win last season, Harlequins had to rally after a poor start against Bristol Bears. Surviving an early scare, in which Louis Lynagh’s pass out wide was deemed to have been forwards, Pat Lam’s Bristol took charge of the opening half.

Joe Joyce scored a poachers try after a burst from Harry Randall, before an energetic Henry Purdy weaved his way through traffic and Charles Piutau crashed over the whitewash too, making all watching on feel as though their trip to West London was in vain.

Louis Lynagh’s try on the 27 minute mark was no doubt a highlight, Harlequins moving the ball quickly to the right touchline, the England hopeful dotting down with little hesitation.

Over 14,000 were packed into the stoop and made their presence known when called upon. After Callum Sheedy had brought the first half to a close with a penalty, Chris Robshaw graced the Twickenham Stoops’ turf once more, the club giving him a proper goodbye after having played his final game for the club in front of empty stands.

To say the noise that Robshaw received when stepping out of the tunnel again was deafening, is putting things rather mildly. What followed following the respite was nothing short of sheer brilliance from the moment Wayne Barnes got the second period started.

Tabai Matson’s team played like men possessed in that second period, always looking to keep the ball alive in order to find an overlap or an extra bit of space to abuse.

Lynagh again found himself scoring a try, as Andre Esterhuizen did the same with a powerful drive. For an infringement in the run up to the South African centre’s score, Jake Heenan was sent to the sin bin, creating even more space for the home side to exploit.

First to benefit was Luke Northmore, the former Cardiff Met standout scoring just three minutes after his introduction to proceedings. Will Collier got perhaps one of the loudest receptions of the nights when he rumbled over from 22 meters out.

Tyrone Green combined with Cadan Murley on the left wing to get himself a well earnt try, the South African an uncontrollable bundle of energy from start to finish.

A superb individual effort from Marcus Smith and an almost effortless try for man of the match, Alex Dombrandt brought a close to proceedings and a venue to its feet, mouths agape because of the game they had just witnessed.

Before I get into the actual rugby, I have to apologise for this match report being so late. It has been something of a whirlwind past couple of days, culminating in being asked to do co-commentary for BBC Radio London’s coverage of tonight’s game.

All I have to say is that it was a quite frankly ridiculous display of rugby. So far this season, Harlequins have flattered to deceive at times, and have never really dominated a game from start to finish.

For the opening 20 minutes, it was all Bristol who perhaps played some of their best rugby of the season so far, but as soon as the Harlequins intensity increased, Pat Lam’s side failed to put any meaningful passages of play together.

The greatest positive for Quins is that up to this point, they have picked up the maximum points on offer without Marcus Smith. Tommaso Allan has stepped into the fray magnificently, but when Smith stepped onto the field in place with just 25 minutes played, the Londoners found another gear.

There was a feeling at the end of last season that Quins’ never say die attitude would haunt them at some point, but up to now it is their best weapon. The inherent belief that no task is too difficult is clearly real, more than just a mantra, and there seems to be no stopping them.

Bristol will no doubt be concerned, with the Bears having failed to score points in the second half in three of the four games they have played this season and suddenly there is a lack of depth at Ashton Gate.

Sam Bedlow left the field injured tonight, meaning that Alapati Leiua partnered with Piers O’Conor in the midfield. With Semi Radradra injured, where that bright spark will come from seems so uncertain.

This is not to say that there aren’t positive intentions within the way that Bristol play, with Fitz Harding looking to keep the ball alive in contact, with Charles Piutau always looking lively.

One of the more fortunate things that Bristol can cling to is that it is still early on in the season. There is still so much more rugby to be played this season and when Bears bring everything together, they are going to be a threat, rest assured.