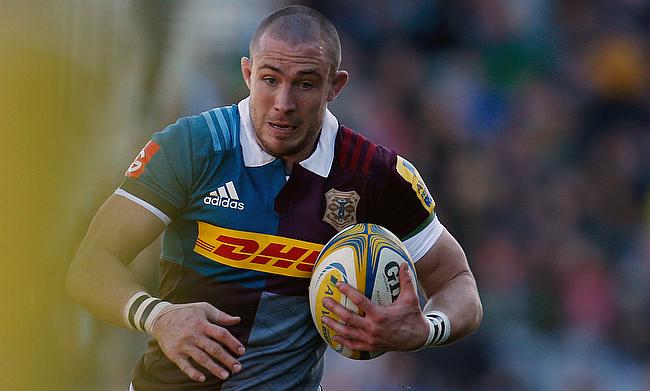 Mike Brown was one of Harlequins' try-scorer
©PA

Harlequins maintained their third position in the ongoing Gallagher Premiership after they went on to dominate Worcester Warriors with a 47-33 bonus point win at Twickenham Stoop on Saturday.

This is Worcester's ninth defeat from 13 games but will be relieved to get a losing bonus point as they have their tally to 22 points which is five ahead of bottom placed Newcastle Falcons.

The home side got off the mark in the second minute when a kick from Danny Care was grabbed by Gabriel Ibitoye, who offloaded to Joe Marchant for the opening try. Ibitoye turned scorer next time when he dotted down in the 7th minute and 11 minutes later England international Mike Brown sprinted across the try line. Smith slotted all the three extras as Harlequins scored 21-0 in the first quarter.

Close to the half-hour mark, Worcester response came through a try from Jack Singleton, who dived across at the back of a rolling maul but the Quins went on to claim the bonus point when a cross kick from Brown was collected from Jack Clifford as he rumbled across with the teams heading into the break with a 28-7 scoreline.

Sustained pressure from Worcester paid dividends as Bryce Heem got their second try in the 50th minute before Care breached past Worcester defence to slot the fifth try by the 54th minute. Close to the hour mark, Brown was sin-binned allowing Josh Adams to capitalise on the numerical advantage with the scoreline becoming 35-19.

But, the final 10 minutes saw both the teams score two tries apiece with Ben Tapuai (70') and James Lang (75') crossing over for Harlequins while Michael Heaney (73') and Tom Howe (80') touching down for the Warriors with the home side completing a 47-33 victory.